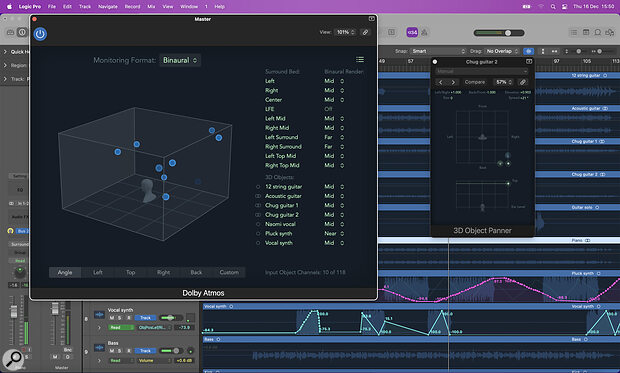 Could a small step for Logic Pro’s version number represent a giant leap for music production?

Modesty isn’t always a quality we associate with Apple. But in recent years, new versions of Logic Pro have been quietly released as free incremental upgrades, when in fact they introduce major new features. This was never more true than with the new Logic Pro 10.7. As ever, the full list of enhancements is vast, and includes innumerable detailed tweaks and bug‑fixes, but the main focus is clear. Logic Pro 10.7 is about immersive audio, and specifically Dolby Atmos.

This, obviously, is part of a wider strategic plan on Apple’s part. Atmos has been pushed front and centre in the Apple Music ecosystem, and launch publicity for the recent M1 Max and M1 Pro processors has likewise highlighted music applications to an unprecedented extent. And it has the potential to be a game‑changer for everyone, not least because 10.7 is once again a free update for existing users.

Logic Pro 10.7 is, of course, still Mac‑only, and requires Mac OS 11 ‘Big Sur’ or Mac OS 12 ‘Monterey’. It’s still compatible with older Intel machines, as long as they can run these operating systems, but includes many under‑the‑hood optimisations for the new generation of M1 chips. A subtle visual refresh brings the GUI more in line with the look and feel of current Mac OS versions, but won’t cause alarm or confusion among existing users.

Taking advantage of its new spatial audio features is remarkably simple, but it’s a good idea to do a little bit of housekeeping first. Assuming you also want to retain a stereo version of your project, it’s probably best to work either in a duplicate copy, or in a Project Alternative, rather than rely on a stereo downmix from the Atmos version. Once you’re ready to go, you can either visit the Project Settings and choose Dolby Atmos from the Spatial Audio pop‑up, or select the new Dolby Atmos item in the Mix menu — and that’s all you need to do!

The sheer effortlessness of this is pretty remarkable when you think about what’s going on under the hood. What’s apparent to the user is that a new Atmos plug‑in is inserted on the master bus, and surround panners are activated on every channel. What you don’t see is that Logic Pro is taking care of routing, sample rate management and buffer size adjustment in the background. Atmos itself demands a sample rate of 48 or 96 kHz, with buffer sizes of 512 or 1024 samples respectively. For best results, it’s probably desirable to apply offline sample‑rate conversion to audio that’s at 44.1kHz before you get stuck in, but if you don’t, there’s no need to worry: Logic Pro will convert for you on the fly during playback.

If at this point you hit the space bar to find out what your newly minted Atmos project sounds like, you might be in for a surprise. That’s because the Atmos plug‑in doesn’t only handle routing and panning: it is also a monitor controller, and defaults to assuming you have a surround playback system. Reconfiguring this is done through a simple pop‑up menu, which includes both 2.0 (so that you can hear how your mix will sound folded down to stereo) and binaural as well as 5.1, 7.1, 5.1.4 and 7.1.4. This obviously doesn’t cover all possibilities, but should be fine for most setups. For mixing on headphones, you’d choose binaural, but note that this setting uses Dolby’s binaural encoder rather than the one through which Apple Music audiences will be hearing your music. More on this later.

Apple clearly want to encourage us to think in immersive audio terms during the music creation process as well.

A Dolby Atmos mix can contain up to 128 channels, divided between two types of audio stream: beds and objects. Beds are conventional channel‑based surround streams containing up to 10 individual channels (organised as 7.1.2), while objects are mono or stereo streams that are packaged with metadata. This metadata tells the playback device how each object should be positioned and moved around whatever speakers are available. (For more on Atmos and immersive audio in general, see last month’s cover feature.) The Atmos standard itself permits multiple beds, but Logic Pro’s implementation only supports a single bed. This is unlikely to be an issue for music mixing: you’d typically need multiple beds only if you were working in post‑production and having to combine music, dialogue and sound effects.

If you click the Output pop‑up on any channel, you’ll see an additional option called 3D Object Panner. Selecting this causes the channel to be converted to an object. Its output is no longer folded into the Atmos bed, but sent discretely to the Atmos plug‑in along with the panning data from the Object Panner. And the beauty of this is that no matter how many times you change your mind about which channels should be objects and which should be part of the bed, Logic handles all of the routing completely invisibly in the background.

In some applications, the same surround panner is used for both bed and object tracks. This has obvious benefits in terms of consistency, but it typically makes the panner itself relatively complex. Apple have taken a different approach, whereby channels that are routed to the bed feature an updated version of the existing Surround Panner, while bed tracks get the entirely new Object Panner.

To take advantage of the height capabilities in Atmos, the Surround Panner can be operated in Planar or Spherical modes. In Planar mode, it acts as a familiar 2D panner: if you want to add height to your source, you need to adjust the Elevation parameter separately. In Spherical mode, by contrast, dragging the pan position in towards the centre of the circle increases elevation automatically. So, if you were to pan dead centre in Spherical mode, the source would appear to be above your head, whereas in Planar mode it would be inside your head, as it were. 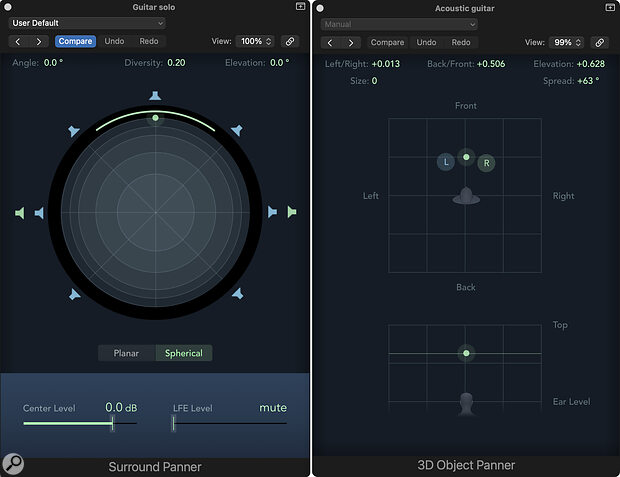 Two different surround panners are used in an Atmos project. Anything routed to the Atmos bed gets the conventional Surround Panner (left), but objects have their own Object Panner (right).

By contrast, the Object Panner represents the 3D soundfield as a half‑cube rather than a hemisphere, and provides separate X‑Y and X‑Z panning grids. Again, the left‑right, front‑back and Elevation parameters can also be adjusted directly, as can the Size and Spread of the object. It’s all about as intuitive and user‑friendly as surround panning ever gets. One non‑obvious difference between bed and object tracks is that Independent Panning for sends is available only for the former, but this makes sense, because otherwise the send would have to be an object in its own right.

The Atmos plug‑in itself is a streamlined version of the Dolby Atmos Renderer used in or with other DAWs. You can watch your sources flying around in a ‘head in a box’ display, with which I think we are all going to become very familiar, and an optional text display lists the objects in your Project, plus all the channels used in the surround bed. Each of these, apart from the LFE channel, can be assigned a Binaural Render flag indicating that it should be treated as Near, Mid or Far when monitoring on headphones. The effects of these settings are often fairly subtle but they are certainly audible — in Logic Pro. Unfortunately, these flags are currently ignored by the binaural renderer used in Apple Music, which means that the mix you audition in Logic Pro might not sound the same when it’s rendered and distributed. There’s presently no way to audition in real time through Apple’s binaural encoder.

One thing that’s crucial to understand is that there is no ‘master bus’ as such in an Atmos mix, and hence no scope for using master bus processing as you might in a stereo environment. Any plug‑ins inserted before the Atmos plug‑in on the master bus affect only the bed channels, whilst plug‑ins placed after it don’t affect the sound at all — though these slots might still be useful for metering plug‑ins, for example.

Talking of plug‑ins, 13 Logic Pro favourites have been now updated for 7.1.4 surround use. The most important of these is probably the Space Designer convolution reverb, which now has an impressive library of Ambisonic surround IRs.

Talking of plug‑ins, 13 Logic Pro favourites have been now updated for 7.1.4 surround use. The most important of these is probably the Space Designer convolution reverb, which now has an impressive library of Ambisonic surround IRs. The surround version of the Tremolo plug‑in is interesting, as the multichannel modulation can create movement within and around the surround space. Also joining the ranks of the surround‑ready are the Limiter, Match EQ, Chorus, Flanger, Phaser, Micro Phaser, Mod Delay, Level Meter and Tuner. There’s also a multichannel Gain plug‑in, and the all‑important Loudness Meter; Atmos is a loudness‑normalised standard so it’s vital your mixes don’t exceed ‑18LUFS. Other plug‑ins such as Chromaverb can operate in multi‑mono mode, in the same way that plug‑ins can be set up in dual‑mono mode on stereo tracks to process the left and right channels independently. Rather than have every speaker treated to its own reverb setting, the user can set groups for the speakers — for example, the left, centre and right speakers would normally use the same reverb setting, whereas you may want something darker and with more pre‑delay in the rear channels.