The Audix USB12 is a cardioid condenser microphone that, as its name implies, connects to a computer via USB. Suggested uses for it include vocal and instrument recording, as well as general speech duties, including podcasting and conference calling. 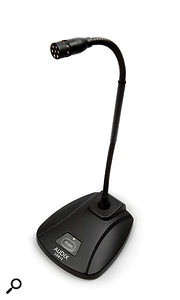 The microphone itself is based around Audix's CPSADXC capsule, a 12mm-diameter electret affair which sits at the top of a long gooseneck stand with a reassuringly heavy metal base. At the top of the base is a button for engaging the mic (with a blue LED to show when it's active), while at the rear you'll find a USB Type‑B socket for the computer connection, plus a mini-jack socket for headphone monitoring. On the underside of the base are two slide switches: the first engages a high-pass filter at 150Hz, and the second selects between momentary and latching modes for the talk button.

The USB12 presents itself to an attached computer as a class-compliant, bi-directional USB interface, so in addition to recording the microphone output, you can send audio from the computer to be played out of the headphone socket. Direct analogue monitoring isn't catered for, though; to hear your performance you need to listen via your DAW, which incurs some latency. The microphone can operate at 44.1 or 48 kHz sample rates, and the A‑D/D‑A conversion is 16-bit.

Supplied with the mic is a foam windshield, and I found this pretty much essential for blocking blasts of air when speaking. The mic's tonality is very neutral, however, and the design of the stand makes it easy to position while keeping it out of the way of your computer screen and keyboard. The stand's height no doubt helps here too: one thing I noticed in my round-up of USB microphones back in the May issue of Sound On Sound — you can read this by going to https://sosm.ag/choosing-usb-mics — is that the mics with short, stubby stands, which put their capsule within a few inches of the desk, tended to exhibit a little high-end phasiness due to desk reflections, but that wasn't an issue with the Audix at all. Nor did I find a particular need to engage the high-pass filter. Provided I used the mic a few inches away (Audix recommend 4-6 inches), pops and blasts weren't an issue either, though the filter did usefully attenuate table bumps and other desk-borne vibrations.

I didn't find the lack of analogue monitoring to be an issue in practice; latency was pretty much negligible even with buffer sizes up to 128 samples. The dual-mode talk button was something I found to be very useful, with the momentary action being especially handy for video calls and the like. And despite the 16-bit conversion, I never found headroom to be a problem. The mic's fixed gain seems to be set at a sensible level for DAW recording, and I had to make quite a racket close to the capsule before clipping occurred.

I would be happy to recommend the USB12 as a good general-purpose computer microphone. It looks the part, is very well made, and in addition to its use as a podcasting and vocal recording microphone it's especially handy for Zoom calls. Though intended primarily for voice, the USB12 would do the job for some instruments too, provided the desktop stand can be suitably positioned.