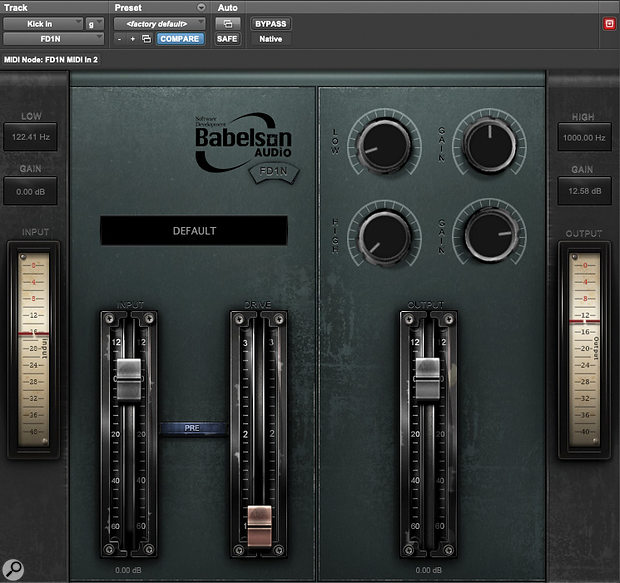 Warmth is the name of the game for these three EQs, which boast modelled Marinair transformers and a range of different virtual vacuum tubes.

After many years as a developer for Waves, Thomas Ceyhan struck out on his own last year, and he has already built up an impressive library of plug‑ins under his Babelson Audio label. Many of these tools embody a visual and sonic aesthetic that's derived from studio gear of the past, but they don't emulate specific vintage items. Instead, the approach seems to be to cherry-pick favoured elements of classic designs to create a simple but effective hybrid.

That's certainly the case with the three plug‑ins in the FD Bundle. Each comprises three main components: a simple equaliser with high and low shelving bands, a virtual input transformer and a valve saturation stage. The EQ and transformer modelling are identical in all three FD plug‑ins, with the latter being modelled after the classic Marinair design used in vintage Neve modules.

What change are the valve types that are emulated in the second saturation stage. The FD1N is the 'British Edition', with the virtual mains supply rectified using an EZ80 and gain supplied by an emulated EF86. Babelson's descriptions of both the FD2N 'Russian Edition' and the FD3N 'American Edition' list multiple valve types, but these are not user-selectable, so it's not clear exactly what is being emulated for any given control setting.

The control set, and indeed the presets, are identical in all three plug‑ins. Both EQ bands have variable frequency and gain controls, which are supplemented by Paintonesque quadrant faders for Input and Output gain and Drive, and equally old-school edgewise meters. The retro visual theme is perhaps a little undermined by elements such as the preset selector and text-based value readouts for the EQ bands, but the latter are certainly useful.

Like all of Babelson's plug‑ins, the FD series are available in all the major native formats for Mac and Windows operating systems, and are authorised using an iLok account. Note, though, that FL Studio is currently not supported on either platform. 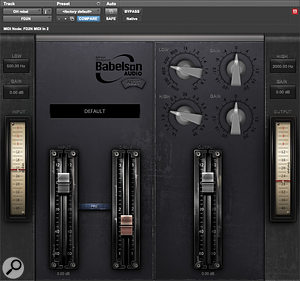 Babelson's website suggests that an FD-series plug‑in is the sort of thing that you might want to use on every track in a mix, as a basic channel strip that combines broad-brush equalisation with saturation to warm up digitally recorded sources. I dutifully loaded instances of FD3N across all the main channels in a straightforward rock multitrack, chose appropriate-looking presets such as 'Kick', 'Snare Top' and so on, and hit the space bar. About 0.03 seconds later I hit the space bar again, because what emerged wasn't so much a subtly enhanced version of the original as a wall of lethally bright fuzz.

Not to be disheartened, I switched them all back to the 'Default' preset, which has minimal Drive and flat EQ settings, and what I heard then was much more like what I expected to hear: a mix that was recognisably the same as before, but with a welcome injection of liveliness and colour.

Even at these minimal settings, however, it's possible to overdo things. For example, if you have an FD plug‑in active on both a source track and a bus to which that track is routed, it can be hard to avoid obvious harshness. And, although I liked what the equalisation can do on a master bus, it always seems to be accompanied by a side order of grit that becomes slightly wearing after a while.

At these prices, plug‑ins only really have to do one thing well — and these plug‑ins do several things very well.

The flip side of this is that if you do want obvious coloration and retro raunch, these plug‑ins offer it in spades. Of the three, it's the FD1N 'British Edition' that generates the blowsiest, most blown-out saturation when pushed. FD2N tends towards a more rounded, squashier tone, whilst FD3N is typically brighter and more 'clipped' in its presentation. 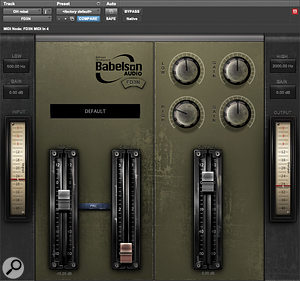 As I grew more acquainted with their individual strengths, I leaned more towards using them on specific sources and less as general-purpose warmer-uppers. My very favourite application was to use FD1N on bass guitar. Place it at the end of the signal chain and slowly raise the Drive control, and you can introduce a lovely purring, growling saturation that really helps the instrument stand out on small speakers, without clogging up the lower mid-range. All the FD-series plug‑ins are likewise excellent for warming up DI'd keyboards and over-clean virtual instruments.

All three of these plug‑ins are useful on a wide range of sources, then — but at the same time, all three would be even more versatile if the control range were less extreme. As soon as you approach halfway on the Drive control you're squarely into special effect territory, and I have no idea who would ever have a need for ±20dB gain on an EQ that already results in pretty radical tonal changes when you dial in a 5dB boost. In practice, the only way to achieve remotely subtle effects on most sources is to leave Drive right down and juggle the Input and Output controls. (Except on FD2N, that is, whose Drive control for some reason behaves differently: its default position is about a third of the way up, and pulling it down to the bottom mutes the signal altogether.)

At their nominal full price of $139 each, the plug‑ins in the FD Bundle will perhaps tempt only connoisseurs of crunch, rather than those who are seeking general-purpose mixing tools. However, Thomas Ceyhan seems to have taken on board his former employer's approach to pricing, and as a consequence, Babelson products usually seem to be available at vastly reduced sale prices. At the time of writing, for example, the FD plug‑ins are being offered at $29 each (or a slightly baffling $90 for all three!). At these prices, plug‑ins only really have to do one thing well — and these plug‑ins do several things very well.