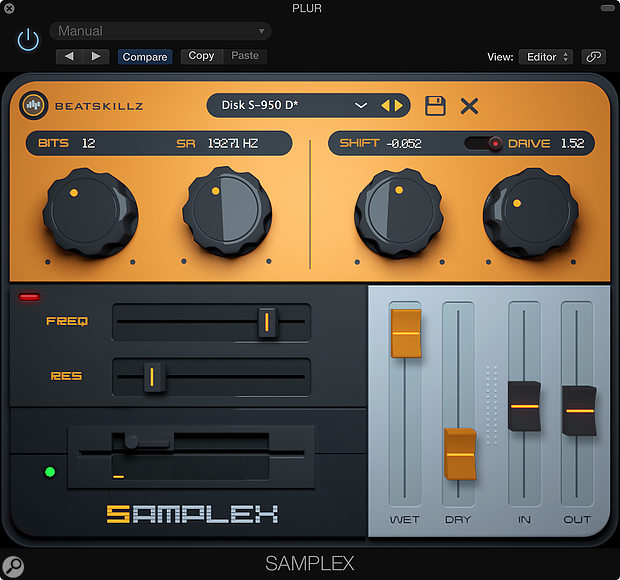 SampleX brings the sound of early digital samplers to your DAW.

If you head over to www.youtube.com/soundonsoundvideo, you'll find our video documentary about producer Pete Cannon, whose love of '90s jungle led him to put together an authentic '90s jungle studio, complete with Atari and Amiga computers and, of course, a big, beige Akai S950.

But what exactly does a digital sampler, made in 1988 and with RAM measured in kilobytes, bring to the table? The answer is its A‑D and D‑A converters. The Akai S950 operated at a lowly 12 bits, and in order to maximise sampling time, it had a continuously variable sample rate, from 48 down to just 7 kHz. Lowering the sample rate limited your bandwidth, of course, but it also introduced a whole lot of aliasing — or 'digital crud', for want of more space to describe it properly. The more high-frequency content you try and chuck through a band-limited A‑D converter, the more aliasing you'll get — and the short sampling times on those old samplers lent them perfectly to drums, which have a lot of high end. The result is drum hits and breakbeats that sound gritty, crunchy, dirty and other usually undesirable adjectives, and that's something you'll hear all over '90s music, from hardcore to hip-hop, jungle and drum & bass.

The old S-series Akai racks, along with early MPCs and other primitive samplers like the E-mu SP‑12 and 1200, now fetch rather a lot on the secondhand market, but software company Beatskillz have come out with a cheap and easy way to get that sound without leaving the comfort of your plug‑in menu. SampleX comes in VST, AU and AAX Native flavours, requires 300MB of disk space to install, and is authorised via a code, emailed on purchase. Installation on my late-2013 MacBook Pro was simple and painless.

It does a very good job of evoking the multi-generation loss I associate with hip-hop samples.

Naturally, the first thing I did once I'd installed it was drop some breakbeats into Logic and see if I could rough them up a bit — which I could, and very successfully too! SampleX defaults to 12-bit mode, which sounds about right to me; any higher and the effect becomes increasingly subtle (verging on inaudible around 16-bit), lower and the digital artifacts start to take over, with settings of 8 or below sounding really quite extreme. The sample rate parameter has a similarly wide range in that you can set it to subtly shave the very top end off, or drastically band-limit your audio. At 'happy medium' settings though, it does a very good job of evoking the multi-generation loss I associate with hip-hop samples.

To the right are knobs labelled Shift and Drive. Drive is nice and easy to explain: it's an emulation of the Akai S900's analogue input stage, and it behaves much as you'd expect, adding some subtle distortion that thickens the sound up nicely and also makes the modelled digital artifacts more pronounced. Shift is a little more involved. In days gone by, you could eke more sampling time out of your limited kilobytes by sampling a 33 1/3 rpm record at 45, and then pitching it down in the sampler. This had the effect of also pitching down any aliasing you'd incurred, and in extreme cases would leave you with a distinct metallic whine. The Shift control tries to emulate this, but without you having to go to the faff of pitching things up and down. It's quite successful too, although it stops just short of the pitched noise effect you can hear so clearly in, for example, Ed Rush's 'Bludclot Artattack'.

Finally, the bottom panel houses a useful set of sliders for setting the wet and dry balance and input and output gains, plus a 24dB/octave low-pass filter. This models a "well-known ladder filter", and is a very useful addition. The controls behave exactly as you'd expect, it self-oscillates if you cajole it into doing so, and the low end is maintained even at high resonance settings. Slow sweeps across the whole frequency range are especially fun.

And that's about all there is to it! The presets are many and varied, and include some sampler-specific emulations (the two E-mu models mentioned, plus the Akai S612, S900 and S950), as well as some more extreme presets. All the controls have a wide enough range to let you achieve anything from 'slight grubbiness' to 'filthy digital hash', though as with most grot-inducing plug‑ins, there's a distinct sweet spot where it sounds its best. It also has uses beyond just making things sound like samples. Inserting it before a delay send provided some very useful dulling of repeats, for example. In all, then, a very useful plug‑in, and much cheaper than a vintage sampler too!

A cheap and easy way to get 'that 12-bit sound' and much more besides.