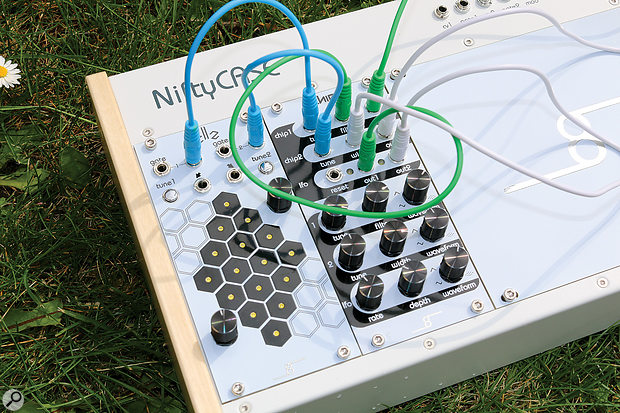 The NiftyBundle offers an extremely affordable gateway into the world of modular synthesis.

Perhaps the biggest barrier to falling down the Eurorack modular rabbit hole is the case and power supply. Before buying your first module you're faced with choices about the size of case you want and how you expect to power it. This makes you feel like you can't begin your Eurorack exploration without knowing exactly where you're going and how many amps it's going to use. And both cases and power supplies can be more expensive than buying a half-decent synthesizer — and you haven't even made any noises yet!

In step Cre8Audio with a near-as-dammit perfect solution. Their aptly named NiftyCase hopes to offer a decent starting point for the modular-curious by stuffing everything you need to start your Eurorack journey in one 'nifty' box. Couple that up with a pair of useful modules and you've got the NiftyBundle, which is the focus of this review.

The NiftyCase is almost completely genius. I'll come to the 'almost' in a minute, so let's focus on the genius. It's a decent-looking box, made of metal with light wooden cheeks and 84hp worth of space for modules on threaded rails rather than sliding nuts. The clever bit is that Cre8Audio have not only taken the stress out of deciding on a power supply by building it in but they've also added a rather wonderful set of utilities that transform it into a workable stand-alone instrument.

First of all, you have an audio output that you can plug straight into your mixer at line level. There are two Eurorack-level patch sockets on the top of the case that route your modules down to this single output. And secondly, it has a MIDI interface. This translates to a row of patch sockets on the top of the case offering two lots of CV/Gate, one Modulation output and one Clock. CV/Gate 1 responds to MIDI channel 1 and CV/Gate 2 to MIDI channel 2. The Modulation output is mapped to the modulation wheel on channel 1 and the Clock translates MIDI clock into a CV pulse.

It has a very welcome MIDI Thru port, so you can use the NiftyCase in a MIDI chain and you can also connect it straight to your computer via USB. The MIDI interface is relatively simple but it's usually something you have to purchase as a module if you want to use Eurorack with MIDI. It does about the same as a Doepfer A190-4 costing €180. Purely as a MIDI-to-CV interface the NiftyCase is worth the price and you get a whole powered case thrown in.

The NiftyCase's back panel hosts connections for audio output, MIDI In and Thru, USB and an external power supply.

It should also be noted that the power supply is internal, with a power switch and a simple wall-wart supply. There's no power module taking up space like the Arturia RackBrute cases or the TipTop Audio Happy Ending Kit (previously the best-value entry point to modular) which has none of the features of this case.

You can sit down with a couple of modules and a MIDI keyboard and just play. This brilliantly bridges the void that many people feel when trying to access modular from the familiar position of the piano keyboard paradigm. You could build yourself a synthesizer with traditional architecture and play it from a keyboard or sequence it from your DAW without having to get all bleepy/bloopy and modular about it.

The 'almost' moment is the slight disappointment in that the jack output on the back is mono. That's not unusual or disastrous, but in my view a stereo headphone socket would have pushed the case closer to perfection as a self-contained unit. 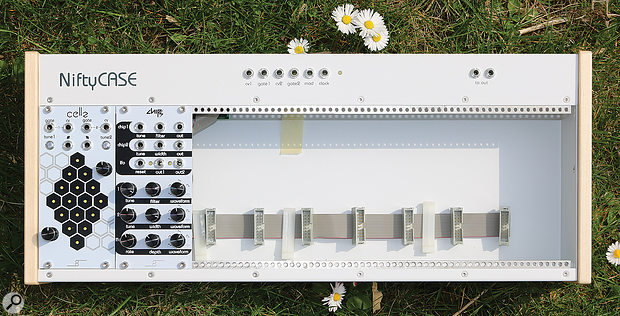 The NiftyCase offers 84hp of space and connections for up to 10 modules.

With the Bundle Cre8Audio have developed a pair of rather fruity modules that give you a decent place to start, and they've made some really good choices. Chipz has two oscillators and a time-divided LFO with two outputs. All three oscillators can sweep from sine wave through triangle, sawtooth, square to noise. Cellz is a clever little bi-direction and dual-level sequencer and arpeggiator. They've also thrown in a bunch of weedy but functional patch cables.

Cre8Audio talk about how Chipz was supposed to be a 'Chiptune' oscillator but ended up being something else. What that is exactly is a little hard to describe. What you seem to end up with is something quite broken but somehow I don't think that matters. The oscillators fizz and spit at you threatening to collapse at any moment. They are producing waveforms on the edge of madness full of crackle, ticks and jagged edges. I guess you'd describe it as 'charm' or 'character', but examining the output of Chipz with an oscilloscope shows something that only vaguely approximates the waveforms on the dial. Perhaps they are more of a suggestion?

Once you pump in a sequence these two oscillators come alive. People pay good money to distress and debilitate waveforms in this way and Chipz has it for free. A one point I thought I might have left a vinyl crackle emulation plug‑in on the mixer channel — nope, it's just Chipz.

Chip 1 has some kind of filter built in which doesn't do a whole lot until you're at about 12 o'clock on the way to fully counter-clockwise and then just as you're ending your low-pass sweep it glitches, crackles and distorts — but not always. Mostly on the 'sine' wave.

Chip 2 is considerably louder than Chip 1 if the pulse-width knob is anywhere but fully clockwise, where it seems to find its purest tones. But the two oscillators do sound very different. Detuning them together is fabulously crackly and a bit experimental as they don't hold their tuning particularly well. Chip 2 has a 'Width' input and a knob for some pulse-width modulation. It modulates all the waveforms regardless of the shape, which is quite interesting.

Without a doubt the NiftyCase is a great way to start your modular adventure.

The LFO is useful and you have two outputs: one running at the quater-speed of the other. This quite cleverly enables the LFO section to run the full range of the Cellz sequencer, which we'll come on to in a minute. The output of the LFO is unipolar (0 to +5 V), which brings up a problem you might run into. LFOs are commonly bipolar in that they run from +5 to -5. The CV inputs for the Filter on Chip 1 and the Pulse Width on Chip 2 appear to only be able to handle positive voltages, which is probably why the in-built LFOs are unipolar. When you patch in an LFO from somewhere else the negative half of the cycle sends all three oscillators into a frenzy regardless of which input you've plugged it into.

The behaviour of the oscillators could be regarded as experimental or possibly broken, but in use what you find is something quite exciting, unusual and edgy. Characterful rather than charming perhaps, but good fun never the less.

This is a really useful module that's perfect for a little system such as this. Cellz is a two-channel sequencer and voltage generator that gives you 16 touch-sensitive hexagonal pads to play with, arranged in a diamond-shaped block. Each pad can be tuned by holding the Tune 1 or Tune 2 button and turning the corresponding knob. The output is quantised to 12 semitones by default, which makes it really easy to work up a tune but also limits the range to a couple of octaves. If you engage the freeform unquantised mode then you can access the whole range from 0 to +10 V.

Once you've set your notes you can send them out by touching the pads with your finger. Touch more than one pad at a time and you trigger the arpeggiator. As you hold the notes the left knob becomes the tempo and the right knob adds higher notes somewhat unpredictably.

For sequencing there are two trigger inputs. One nudges the sequence to the next pad down to the left and the other nudges down and to the right. So sending triggers to one input cycles through four pads to the left, the other four pads to the right. Combining them either creates a useful amount of chaos or if you get the timing right gives you 16 steps of sequencing. Touching a pad will interrupt the sequence for as long as you hold it, although this didn't often work for me and the results could be anything from no change to chaos.

Without a doubt the NiftyCase is a great way to start your modular adventure. For the beginner it works straight out of the box and has the familiarity of MIDI and USB connections. For the seasoned modular explorer it could be a perfect box for live performance or modular-on-the-go. The MIDI/USB‑to-CV features are fantastically useful, the power supply is decent for the size, the build quality is great and you can't really beat the price.

The modules are a bit more of a mixed bag. Cellz is excellent but Chipz is full of fizz, spit and crackle. The oscillators lurch around in search of stability, they bleed into one another and suffer from an excess of character. But after introducing them to a badly needed VCA, envelope and a better filter, I'm sitting here listening to a rather beautiful tune. So, they may be unruly, noisy and badly behaved but they are also fun, interesting and flavoursome.

What you do get is a working modular system with the ability to make a tune and play with two sound sources and modulation for a knock-out price. Just don't think too hard about how much it's going to cost to fill the rest of the case.

The NiftyBundle combines a remarkable Eurorack case with some fun modules that suffer from an excess of character.