The Fusion Series is all about valves. It's Erica's premium offering of Eurorack modules and is dripping with extreme saturation and deep gooey darkness. The Fusion System II contains just six modules, but together they form a single 104HP row of impressive-looking modular potential. Their physical presence is imposing, with design and layout that is engagingly symmetrical, delightfully ordered and manages to look somehow bigger and bolder than the Eurorack format it follows. For this review, we were sent the Fusion VCF3, the Fusion Modulator and the Fusion VCA-Waveshaper-Ringmod.

The Fusion VCF3 is quite a different animal from the earlier VCF2, which had three inputs into a selectable 24dB/12dB low-pass filter with a CV-controllable cutoff, resonance and a mix output. The valve in the middle of the module was designed to drive the audio signal. It had plenty of Erica Synths' character and quirkiness in the feedback loops and pushing of resonance. In the VCF3, by contrast, we find a pair of valves, we find vactrols and an uncharacteristic softness. Where we perhaps expect to find grit and drive, we discover sweetness and nuance that makes for a versatile and rewarding filter that can easily become an instrument in itself. 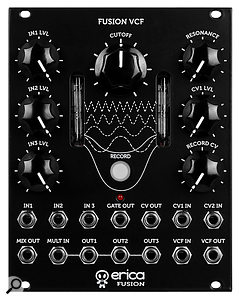 Fusion VCF3. Size: 20HP. +12V 81mA, -12V 76mA.There are some elements carried over from the previous version. The VCF3 has the same three-input design with a clean mix output along with the filtered output. But from there on in it's very different. The pentode valves are not there to offer overdrive or fatten up the sound: they act as transimpedance amplifiers and form the resistance part of the filter circuit along with the vactrols to control the cutoff. It's this unusual design that gives the VCF3 its character.

The control system also has a life of its own. You can't fail to notice the big Record button in the centre of the module. This enables a CV recording feature, where you can create your own filter cutoff modulation by recording the movements of the Record CV knob. Hold the button and dial in the exact envelope shape or movement you want — it's completely brilliant. You don't have to go to all the trouble of patching in an envelope or LFO. The recorded modulation repeats, and you can control the rate using the Record CV knob as it becomes a divider and multiplier. As a bonus, every time your recorded modulation goes past the 12 o'clock position it sends a gate out of the Gate Out. Which gets you thinking about using the Record CV function for more than just the filter. Erica Synths have thought about this as well, and have provided a separate CV output so you can route it to other places; if you plug something else into CV1 In, the Record CV is no longer normalised to the cutoff, making it free for other purposes. A second CV input with attenuator also routes to the cutoff giving you two ways of shaping its position.

And then we have 1‑to‑3 Mult, which seems like an odd addition to a filter. But if you look at the wider context of the Fusion System II, you realise that Erica sort of squeezed it in as a useful utility to contribute to that system. And that's probably what drove the idea of the Record CV circuit.

In use, the VCF3 is beautiful. The extravagant size of the module provides space for those very finger-friendly Bakelite knobs Erica like to use, and the layout is luxuriously clear and well defined. The filter sound is uncommonly soft and smooth, and you can feel the 'organic' nature of the vactrols at work. The resonance will self-oscillate with very little persuasion and perhaps a little bit too easily. You don't get much knob to turn before the tones start to dominate, which is fun in itself, but I'd like a little bit more play before I get there. It's not tuned to 1V/oct and the resonance has no CV input, so there are some limitations to what you can do with that self-oscillation. But otherwise it's an enjoyable filter with a lot of versatility and useful functions, and you're going to love that Record CV knob.

This is Erica Synths at their most intelligent and experimental, which is perfect for feeding the tones of seasoned modular explorers.

The Fusion Modulator is an uncommon generator of modulation, unlike anything I'd seen before, but perhaps would be more familiar to users of the EMS Synthi. It has two looping envelopes that use the Attack, On, Decay, Off functionality of these classic synths, which can feel very odd if you're used to dealing with traditional ADSR staging. The On function covers the length of the Attack plus extra holding time at the maximum value before the Decay stage begins. Off specifies a length of time before the next cycle begins after the Decay stage has ended. This produces a trapezoid shape with a gap the length of the Off stage. It can get a little confusing when you have the Attack time and On time fighting with one another, but once you get the hang of it you'll find it gives quite a unique rhythmic flavour. 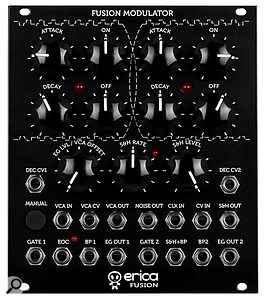 Fusion Modulator. Size: 22HP. +12V 125mA, -12V 74mA.The two envelopes account for the top eight knobs, but there's a lot more going on here. The Fusion Modulator has a built-in VCA, which is controlled by the EG Level/VCA Offset knob. It's not normalled to the envelopes, so you can patch either into the VCA CV input for some handily self-contained enveloping. There's a Sample & Hold circuit that uses an internal Zener diode-based white-noise generator, which can be bypassed by plugging something into the CV input. The Noise has its own output, just for fun.

The bottom row of sockets, along with the two envelope Gate inputs and shape outputs, offers some extras. There's an End of Cycle (EOC) output for the Off stage on Envelope 1. BP1 and BP2 give you a bipolar version of the envelope output as a properly cycling LFO. 'S&H+BP' gives you a super-random sum of the bipolar envelope and Sample & Hold output.

There's a lot going on, with a massive amount of modulation that doesn't behave like standard envelopes and LFOs. And once you spend some time with it and engage in some deep thought, it starts to become very useful. It's particularly good at evolving, at self-modulating and accidentally hitting audio rate. You can feed things into each other, having the EOC running the start of the other envelope while feeding the bipolar into the S&H clock to pull the rhythms of modulation into each other while throwing out complex filter shaping and VCA control. You don't expect to spend so much time playing on an envelope module, but there are so many things to discover.

The third module on test is the Fusion VCA-Waveshaper-Ringmod: not exactly a snappy name, but because the waveshaping and ring modulation are far more interesting than conventional VCA-type things, I guess they need equal billing. 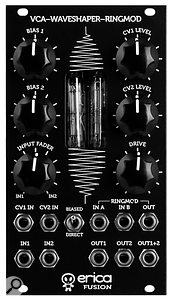 Fusion VCA-Waveshaper-Ringmod. Size: 14HP, +12V 48mA, -12V 69mA.The module has two modes: Direct and Biased. In Direct mode it can operate as a standard VCA, and you should ignore most of the controls. In Biased mode it becomes an exercise in experimental shaping and response tweaking. The two Bias controls adjust the voltage on different grids of both valves, which run in series for better gain reduction. So, although it looks like a two-channel VCA it's more complicated, combined and integrated than that.

The two Bias knobs work differently, and together they define the characteristics of the VCA. Bias 1 is the most prominent, moving from scaling to folding to flipping and back again, riding the bell-curve response of the valves. Bias 2 makes smaller adjustments, fine-tuning and offering variations on the shapes conjured by Bias 1. The CV inputs and CV level knobs act on the Bias and control different grids on both valves, giving more modulation possibilities — also known as not really having any idea what will happen until you try.

The outputs are not what you'd expect, either. Out1 and Out2 do not correspond to In1 and In2, which are mixed and balanced at the start of the module using a crossfade knob. In fact, combining waveforms at the input gives the Bias controls lots more to play with. Out1 is the orthodox output, coming from the anodes of the valves, and contains the waveshaped VCA signal. Out2 takes the signal from one of the valve grids and behaves differently. If you're not sure which to use, opt for Out 1+2 which is the sum of both outputs plus distortion offered by the Drive knob.

The Ringmod exists as a little circuit of fun all by itself. If you plug in a couple of waveforms from the same VCO, it can act as another form of waveshaping. Use two different VCOs and you can enjoy the full range of ring modulation, from Dr Who intro to bell-like twinkles. If you haven't got anything plugged in it will borrow from Out1 and Out2, so there's always something interesting coming out of the Ringmod output.

If you are wanting to patch in a basic VCA, filter or envelope then you should probably plug your cable into something else, as none of these modules offers a standard pathway into the modular process. However, they are dripping with features and complexity and have an engagingly cerebral approach to sound shaping and modulation. This is Erica Synths at their most intelligent and experimental, which is perfect for feeding the tones of seasoned modular explorers.