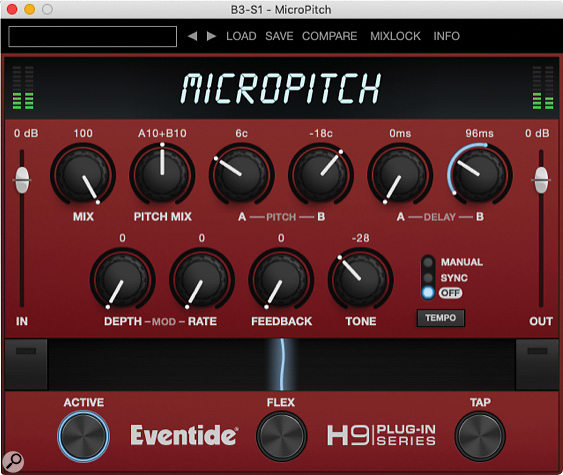 With algorithms ported from their H9 pedal system, Eventide's MicroPitch plug‑in is a dual pitch-shifter and a dual delay effect with modulation. It's available both for iOS and Mac/Windows, and caters for VST, AAX and AU formats. It's a versatile effect, which boasts the H9's ability to morph between two different sets of control values using a horizontal ribbon slider. Even the footswitch buttons of the H9 version have been implemented, in virtual form: Active (bypass), Flex and Tap. Flex is the only one whose purpose might not be immediately obvious — when engaged, this switch doubles the amount of pitch-shift for both voices. The maximum range of each pitch-shifter is just 50 cents — up for A and down for B — so there are no harmonies or octaves on offer. Rather, this plug‑in is all about detuning — and being slightly out-of-tune has never sounded so rich and inviting!

The control layout is pretty simple, with the usual wet/dry control, a balance between pitches A and B and separate Amount controls for both A and B pitch and delay time. The delays can go up to two seconds. There's also a sync-to-DAW tempo option, with a choice of subdivisions. This is selectable individually, for the two delays. Modulation is variable in both depth and rate, and a common feedback control recirculates the delays with the pitch-shifter in the feedback path. Add a global high-cut tone control that affects both the A and B voices and that's about it, other than input and output level sliders. Of course, there's a selection of factory presets to get you started, but this thing is so simple that you can set up your own effects in moments.

This plug‑in is all about detuning, and being slightly out-of-tune has never sounded so rich and inviting!

The all-important question, though, is what kind of effects you can coax out of this plug‑in. You're probably familiar with the fake ADT effect that's created by using two small (just a few cents) opposing pitch-shifts and a short delay of a few tens of milliseconds. Not only does MicroPitch constitute a neat one-stop shop for this effect, but you can also add a little pitch modulation to the voices to simulate natural pitch wander. This is a great way to add weight and texture to backing vocals.

Add deeper modulation and you can create a full-on, chorus-like shimmer that works well with instruments. Using a few cents of opposing pitch-shift plus modulation, but with little or no delay, turns a sawtooth synth into a retro string machine, while adding delay and feedback first adds texture, then, at higher settings, brings in a noticeable 'pitch-spiralling' effect. That can be quite dreamy at longer delay times, as long as it's kept very subtle, while at short delay times it creates an atonal, metallic effect that can work well on electronic percussion. Detuning also provides a very musical alternative to the traditional chorus pedal — a similar sound, but with a less obvious cyclic 'pulse' — so guitar players could get a lot out of this plug‑in.

In short, Eventide's MicroPitch is able to create effects that range from echo unit to chorus, from ADT to nightmare pitch-spirals and aggressive metallic resonances. Given its exemplary sound quality, it's definitely worth having around.