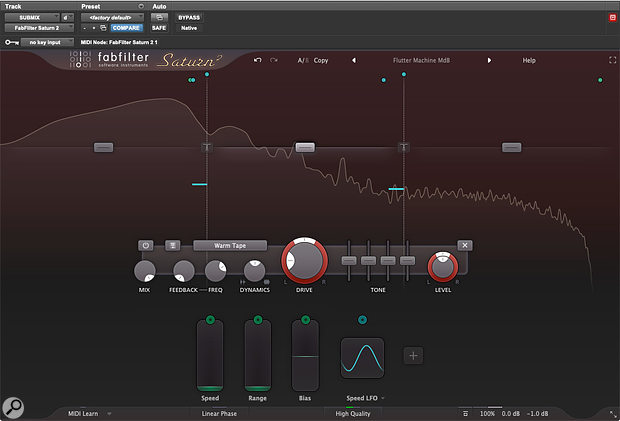 There's rather more to FabFilter's redesigned multiband saturator than a slicker GUI.

FabFilter's Pro series of plug‑ins is, arguably, the benchmark for current user interface design. Products like the Pro‑Q3 equaliser, Pro‑C2 compressor and Pro‑MB multiband dynamics processor are used by almost every engineer featured in our 'Inside Track' series, and have inspired homages from rival developers. However, the FabFilter catalogue also includes older plug‑ins that weren't designed along the same elegant lines. Timeless, for example, is a great delay effect, but although it's lived in my plug‑in folder for a decade or more, I still have only the vaguest idea of how to program it. And although the original Saturn distortion plug‑in is equally powerful and flexible, 'intuitive' isn't the first word you'd reach for to describe the experience of using it.

With the new Saturn 2, then, FabFilter have wisely chosen to focus on making its power more accessible. Like all the FabFilter plug‑ins, Saturn 2 is available in all major Mac and Windows native plug‑in formats, and is authorised using a simple licence key. The basic layout is not too dissimilar from the original, but the graphics have been greatly refined and, as with the Pro plug‑ins, there's a choice of window sizes. It's backwards-compatible with Saturn 1 and includes all the original presets, but existing projects that used Saturn 1 will continue to load the earlier version.

As before, controls that affect the sound directly are housed in the main central area of the interface, and there's an additional section at the bottom. Initially blank, this can be populated by macro controllers such as X‑Y pads and sliders, and modulation sources such as LFOs and envelope followers. Dragging from these onto controls in the main area sets up modulation or macro control, and it's easy to, for instance, assign a single slider to control multiple parameters.

One of the things that made Saturn 1 less than intuitive was that there was no real visual indication of the effect of these modulators — an LFO might be furiously wibbling something backwards and forwards, but the control that was being wibbled would remain serenely static. Saturn 2 makes the whole business much more user-friendly; not only is the process of connecting sources to destinations now much clearer, but any modulation that takes place is represented using animations in the main window. The controls themselves don't move, but any offset introduced by macros or modulators is overlaid and clearly visible.

The modulators themselves have received a welcome visual makeover, which simultaneously declutters the interface and presents more information in a more useful fashion. For example, the minimal visualisation of the envelope follower provides a very clear idea of the basic shape that is being derived from incoming signals, and clicking on it expands it to show the full control set. Both the envelope followers and the envelope generators have also been improved, with the addition of curved elements to the former and transient detection to the latter.

Another potential source of confusion with Saturn is its 'nested' multiband architecture. Like quite a few other saturation plug‑ins, it can operate in single-band mode or it can divide the incoming audio into two or more frequency ranges, and apply different processing to each. Each band, however, also has its own set of four frequency or Tone sliders, arranged in a similar banded way. Labelled Bass, Mid, Treble and Presence, these are similar to the tone controls on a guitar amplifier, and mean that applying saturation to an individual band often generates audio content outside its bandwidth. For example, if you operate Saturn in two-band mode with a crossover at 2kHz and crank up the Presence control on the low band, most of the additional harmonics that are created will be well above 2kHz.

That fundamental architecture hasn't changed, and it still takes some experience to figure out, for example, that the most effective way of brightening up a source might be to apply a Presence lift on the mid band rather than boosting the high band. What has changed is that you can now have up to six frequency bands, and there's now a choice of crossover slopes, with an option to make these linear-phase. All Saturn processing can now operate at up to 32x oversampling. As before, each band can have its own type of saturation, and the already comprehensive list in version 1 has been extended further in Saturn 2, with no fewer than 28 different 'styles' now available. The other per-band controls (Level, Mix, Drive, Dynamics, Feedback and feedback Frequency) are unchanged.

Saturn 1 included a brilliant preset called Magic Mastering, which always made me think 'surely this is cheating?', and the equivalent in Saturn 2 is even better.

When it first appeared, one of the more unusual features of Saturn was that it didn't just focus on obvious fuzz and crunch effects. FabFilter took seriously the idea that distortion and saturation can be used subtly at the mix, both on individual sources and also on buses, as an alternative to EQ and other tonal processing. That idea is now well established, and there are any number of console or preamp emulation plug‑ins that will add the requisite layer of warmth or crispness to a soft mix. Saturn is vastly more versatile than most of these, and the new features in version 2 extend this area of its operations even further. For example, the new distortion styles include no fewer than three separate types of transformer saturation, while the improved envelope follower makes it easy to incorporate subtle dynamic effects on drum peaks and so forth. Saturn 1 included a brilliant preset called Magic Mastering, which always made me think 'surely this is cheating?', and the equivalent in Saturn 2 is even better.

Other new presets showcase some of the more out-there sounds that are also within Saturn 2's purview. These include some pretty wild modulated effects as well as wigged-out fuzz, guitar amp emulations, brutal digital distortion and more. Some would be difficult or impossible to achieve with other plug‑ins, and it's hard to think of another distortion processor that can produce quite such a wide range of sounds. The flip side of this is that if, say, you're only interested in recreating a Fender Deluxe, you'll get results faster by working with a conventional amp simulator that has a Fender Deluxe preset. Likewise, if you want something to drop on every channel on your mix in order to mimic the sound of a slightly 'pushed' analogue console, Saturn 2 would represent overkill.

As you'd expect after such a long wait, Saturn 2 is indeed a big improvement over Saturn, and I think FabFilter have done exactly the right thing in focusing on the user interface above all. The original plug‑in was already supremely versatile, but its complexity made it difficult to access all of that functionality effectively. Saturn 2 feels much more approachable and less intimidating, and doesn't leave you with the same bewilderment when you load up a preset and think 'That sounds great, but what are all those knobs and sliders actually doing?'

Even so, it's still a highly complex plug‑in, especially when you have several bands and several modulators in play. By way of comparison, the same company's Pro‑R reverb takes on an equally complex set of processes, and manages to be enormously flexible without presenting nearly as many controls. If FabFilter were designing a new saturation processor from the ground up today, I wonder whether they might have achieved even more in this respect.

This update makes Saturn even more flexible and a whole lot easier to use.