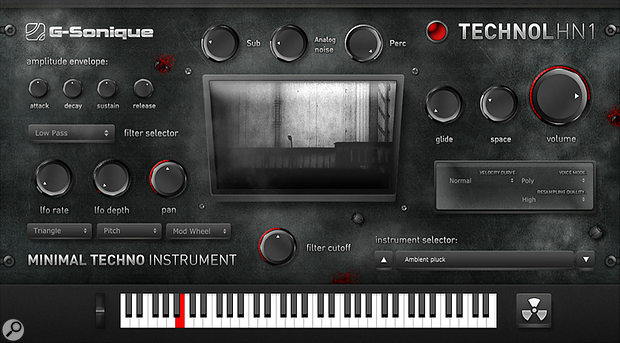 G-Sonique's Technol HN1 offers bread-and-butter techno sounds in an easy to use format and at a bargain price.

G-Sonique's Technol HN1 is an unashamedly simple instrument loaded with 2.4GB of fairly short, non-looped samples, all with a retro techno feel. Based on the same engine as their Psychedelic FX instrument, Technol HN1 incorporates multi-sample hard drive disk-streaming to save on RAM capacity, and allows the samples to be played over a wide pitch range without aliasing (via three quality settings). Formats are VST for Windows 32-/64-bit, and both AU and VST for Mac OS.

With 192 presets, the sound set includes percussion banks, drum banks and multi–octave/multi-layer basses, plus some short-duration instruments such as tuned bells, created and processed using vintage synths (analogue and FM) and analogue outboard gear. Any sound can be augmented via the three controls at the top of the GUI that add sub-bass, a percussive click and analogue noise.

The scope for modifying the sounds is fairly limited and, in Logic Pro X at any rate, only the Attack and Release envelope controls seem to work correctly. Decay and Sustain seem to be unresponsive, though this may be a Logic issue. There's also a Glide (portamento) control and a built-in reverb processor to add a sense of space. The engine allows the player to select from Poly, Mono or Legato modes, though Mono mode is unused so no sound is produced if this is selected. I guess that is the downside of using a third-party engine, but the control panel is so simple that you soon get used to these small wrinkles. At the centre of the screen is a picture window, and different images appear depending on the preset you have selected — just for fun.

Though the instrument appears in some ways to be very basic, the selection of sounds makes up for it with some wonderfully powerful bass sounds, punchy drum hits and tuned hits.

An LFO section offers a choice of triangle, sine, square and sawtooth waveform, LFO depth, rate and control source, with options to modulate pitch, pan position or expression. There's also a control for filter cutoff with a selection of high- or low-pass filter types and the ability to select from different velocity curves. Note that the filter is essentially a static tone control, not a resonant or envelope-dependent filter.

Most of what is on offer sounds pretty familiar, but then that comes as no surprise; TR-style drums and TB-style basses are the staples of vintage techno, as are the more industrial-sounding kits. Most of these sounds work perfectly well as short samples, though one or two of the more drone-like sounds feel frustratingly short, with a maximum duration of two or three seconds before ending abruptly. A few of the presets seem to cut off rather uncomfortably if played for their full duration, but in most cases the sounds are going to be used for drum hits or short duration bass notes. Some sounds also end with a noticeable click if the release control is set below its default midway position.

Technol HN1 can be instantiated as either a stereo-out or 16-out plug‑in and, in Logic Pro X at least, the playback time of the samples seemed to be at least twice as long in 16-out mode as with the stereo version, making the restricted sample lengths far less of an issue, so do give it a try and see if you get the same result. I can't explain why this should happen — but it does.

Though the instrument appears in some ways to be very basic, the selection of sounds makes up for it with some wonderfully powerful bass sounds, punchy drums and tuned hits. Being able to add a sub waveform, attack click and noise also helps make up for the lack of other adjustability. If you like to work quickly, Technol HN1 is a most useful source of bread-and-butter techno sounds and is quite inexpensive.

Simple it may be but Technol HN1 is nevertheless a useful source of stock techno sounds.