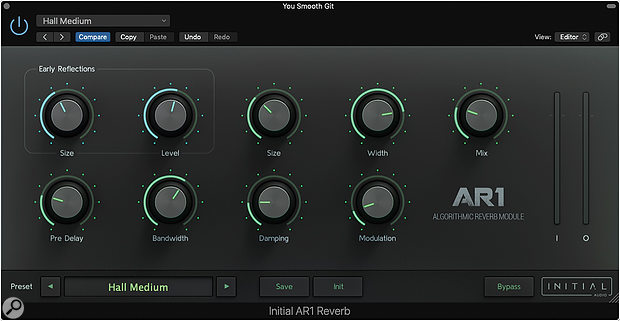 Digital reverb has certainly come a long way since the mid-1980s, when I bought Yamaha's first affordable studio reverb processor, the R1000, for around £400about $500. That 12-bit processor offered four mono presets, EQ and a wet/dry control. Other than having a mono output, it was pretty good for the time, but today we have a wide choice of both hardware and software reverbs that offer rather more flexibility and much higher audio resolution — and usually for a much lower price. If you're looking for a straightforward reverb with a vintage flavour and the minimum of extra bells and whistles, the AR1 from Initial Audio is worth a closer look.

The AR1 is an algorithmic reverb supporting 64-bit VST and AU plug‑in formats on Mac and Windows operating systems. It doesn't offer a choice of algorithms, just a set of controls for adjusting the basic reverb sound, and you'll probably be familiar with pretty much all the controls already if you've used reverb before. There are separate controls for the Early Reflections and the reverb tail, including adjustment of the Early Reflections size (spacing) and level relative to the tail level.

For the reverb tail, Size adjusts both the character and decay time of the reverb effect, while Width allows adjustment from mono to full stereo. Mix sets the wet/dry balance and would normally be set fully clockwise if using in an aux send configuration. A few presets are provided that run from ambience to a very long hall, but the short ambience effects are not at all natural-sounding; it's hard to beat an IR reverb if you want to recreate a natural room ambience.

This can sound quite unsophisticated when heard 100-percent wet, but balance the reverb with the original and it all comes together in a musically pleasing, retro kind of way.

The pre-delay goes up to 300ms, to help create the illusion of distance between the sound source and the closest walls. The Bandwidth control provides high-end roll-off to dull down the reverb, while Damping determines how quickly the high frequencies in the reverb tail decay, relative to the overall decay time. I missed not having a low-cut control, though. A Modulation control sets the depth of a preset pitch-modulation effect that treats the reverb tail, to add a little movement and complexity.

Other than input and output meters, that's pretty much it but, as long as the sound is good, simplicity is no bad thing. This reverb takes me right back to those early digital units, because it has a similar character — a slightly metallic edge to the early reflections if dialled up much past 30 percent — and a brash attack to the reverb tail, with a plate-like decay, again with a mildly metallic coloration and a gritty shimmer. Just like those early reverbs, this one can sound quite unsophisticated when heard 100-percent wet, but balance the reverb with the original and it all comes together in a musically pleasing, retro kind of way.

As our wine-tasting friends might say, this is an unassuming little reverb with no breeding, but I'm sure you'll be amused by its presumption. At the time of writing AR1 is heavily discounted, and in impulse-purchase territory, but the full price isn't crippling either.