For Podcasting By Chris Korff 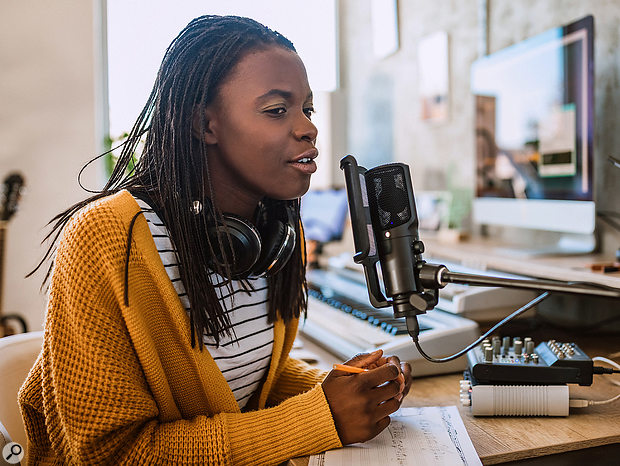 USB mics provide a convenient one-stop shop for podcast recording — but there are a few things to look out for when deciding which one to buy.

The idea that one simple device, connected to your computer via good old-fashioned USB, is all you need to turn your computer or tablet into a podcasting studio has undeniable appeal. And it's pretty much true, too, certainly for all the devices you'll see compared in our USB microphone round-up later on. Whereas even a modest music-recording setup will probably be based around an audio interface of some kind — which can mean tethering a rack unit to your computer, or having a desktop device taking up valuable space, not to mention a power supply and a nest of cables tucked away somewhere — podcasting really does just require a microphone and something to say.

But, in truth, USB microphones are audio interfaces; they just hide all the 'interface' stuff within the familiar form factor of a microphone. They pretty much all come with neat little desktop stands, too, so you don't even need to invest in peripherals like mic stands or boom arms. None that I've come across require a separate power supply, either, so provided your laptop or iPad has decent battery life, you can podcast from absolutely anywhere. If you plan on podcasting from an iPad, however, do be aware that not all USB mics are iOS–compatible.

Some of the earliest USB mics were nothing more than a microphone with a USB port where the XLR socket used to be. These were fine for recording, but not so good if you actually wanted to hear what you'd recorded — which presents problems when it comes to the editing stage of podcast production, adding theme music and stings, and so on. And while it's fair to say that podcasting is less demanding of foldback monitoring than recording a musical performance is, it's still very much advisable to listen while you're recording. It can be easy to miss a distracting background noise, or a low-frequency thump from bumping against a table leg while you're recording, and there's nothing more frustrating than having to set up all over again just to re-record a small passage. Thankfully, the world has moved on, and all of the USB mics you'll see on the next page have got headphone sockets built in. 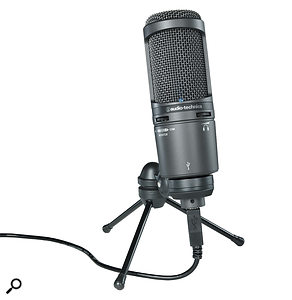 The AT2020 USB+ features direct monitoring with a variable balance control, so you can adjust the relative levels of your voice and music in your headphone mix.Back to my point about USB microphones being audio interfaces. Just as with conventional interfaces, latency — that is, the time it takes for audio to pass through the mic, into the computer, and then back out again — can be an issue, in that it can be remarkably distracting to hear a delayed version of yourself while you're speaking. There are two ways around this. You can either set your recording software up so that it uses more CPU cycles in order to crunch the audio data faster, thus reducing the latency, or you can bypass the computer altogether, and listen to the direct signal coming from the microphone. The latter approach is known as 'direct monitoring', but it's not a feature that all USB mics have. Those that do allow direct monitoring do so with varying degrees of sophistication. Some have a simple switch that sends the microphone signal to the headphones, which means that if you're talking over a music bed, you'll need to adjust the playback level of the music to achieve a comfortable balance. Others, like the Audio-Technica AT2020 USB+, have a variable blend control, so you can turn yourself up or down in the headphone mix without having to adjust your software. I couldn't get that particular model in time for this round-up, but you can read our review of it online at www.soundonsound.com/reviews/audio-technica-at2020-usb 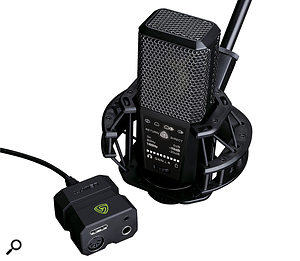 Lewitt's DGT 650 would be suitable for both podcasting and music production.A few 'USB microphones' stray even further into full-blown interface territory. Lewitt Audio's DGT 650 (www.soundonsound.com/reviews/lewitt-dgt-650), for example, comes with a little breakout box that houses not only a headphone output, but a line/instrument input and even a MIDI port — which makes it a compelling option for podcasters who want to dabble in music-making, or even studio owners who want a more mobile setup.

Pushing things even further is Miktek's Procast, which comprises a USB microphone, a mixer/interface, and even a boom arm. The mixer allows you to listen to what you're recording in real time, and the whole package very much looks the part! We reviewed it back in SOS September 2015: www.soundonsound.com/reviews/miktek-procast-sst 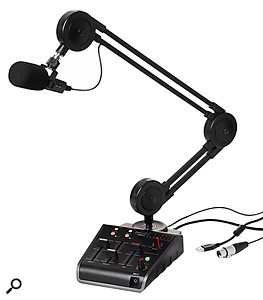 The Miktek Procast comes with a boom arm, and even a compact mixer.USB mics almost invariably come with stands, but not all stands are created equal. The main problem with desktop-style stands is that there's nothing to stop vibrations travelling from your desktop to the mic itself. So if, like me, you're an 'elbows on the table' sort of person, it's very easy to allow low-frequency rumblings to get into your recordings. One notable exception is the Blue Yeticaster set, which comes with a shockmount (the 'cat's cradle' mic-holder, designed to reduce rumbles reaching the mic), as well as a very nifty boom arm, which I found does a very good job of holding the mic where you want it.

The one thing that all the desktop stands do get right, however, is that they angle the mic upwards towards your mouth. Not only does this mean that your voice hits the mic capsule dead-on (the alternative 'off-axis' sound arrival has some sonically undesirable effects), it also means that the mic will pick up fewer sonic reflections bouncing off your tabletop, which should result in a cleaner, more natural vocal sound. You can help things along in this regard by putting something acoustically absorptive on the desk between the microphone and yourself — a pillow or a folded towel would do the job nicely!

USB mics pretty much all come with stands, but not all stands are created equal.

If you feel that desk-borne vibrations and reflections are a problem, a 'proper' mic stand would certainly help in keeping the mic away from the desk, and also decoupled from it. And because all of the mics in our round-up have the option of being detached from their included mount and fitted to a normal mic-stand thread, pretty much any stand will do. For podcasting, you might want to consider a radio-style boom arm; the Compass mount that comes as part of Blue's Yeticaster bundle would be a good option, as would the Rode PSA1, and both allow you to move the mic freely so that you can read a script from your computer screen. They'll also lend your desktop setup a very 'professional' vibe, which is worth considering if you plan to move onto vlogging.

Accessories aren't essential to getting started, but along with getting a good stand, one thing that'll definitely up the quality of your recordings is a pop filter. Suspended between your mouth and the microphone, pop filters are simply mesh membranes that prevent gusts of air reaching the microphone when you make a 'P' or 'B' sound (otherwise known as a 'plosive'). The Beyerdynamic Fox and Apogee HypeMiC both come with a pop shield, but if your mic doesn't, you can easily add one. Pop filters needn't be too sophisticated (although those from the likes of Rycote and Hâkan certainly are!), and most can simply clamp onto any mic stand.

One thing that'll definitely up the quality of your recordings is a pop filter.

For a 'one–man band'-type of podcast, a single USB microphone is all well and good — but if you want a guest to appear in your podcast, or you want your podcast to have a conversational format, things get slightly trickier. Of the mics in our round-up, the AKG Lyra, Rode Yeticaster and Samson Satellite distinguish themselves by offering multiple pickup patterns. This means that you can set them to figure-8 mode, in which they pick up sound from the front and the rear, and arrange the two speakers to be sat either side of the mic. The Lyra and the Yeticaster even offer proper stereo operation — which means you and another speaker could be sat side by side, and there'd be some degree of audio separation between left and right channels, so you could adjust the volume of each channel to compensate for a louder or quieter speaker.

A better solution would be to use two microphones — but that comes with its own pitfalls. Mac computers are fairly graceful in the way they handle multiple audio interfaces, as OS X lets you create an 'aggregate driver' which tricks the Mac into treating the two microphones as being part of a single interface. This comes with a latency penalty, but if you're careful to choose mics that both have headphone outputs, that shouldn't be a problem. To get two USB mics working on a PC involves installing a free piece of software called ASIO4ALL, which does much the same job as an aggregate driver. The Rode website has a good guide to using both aggregate drivers on Mac and ASIO4ALL on PC, and though the instructions are written for their NT-USB Mini, they apply to pretty much any USB microphone or interface: www.rode.com/download/Using_2_NT-USB_Minis_with_PC.pdf

And that is basically all you need to know about USB microphones! Whether you're approaching podcast production as a recording novice, or you've got a studio but just fancy a more mobile setup, a world of options awaits you... 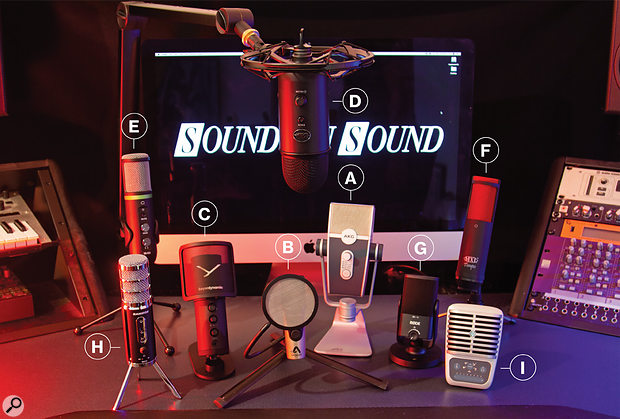 Stylish and imposing, the Lyra houses four capsules which can be deployed in a number of different polar patterns and stereo configurations.

The HypeMiC features a built–in compressor with three preset options, to help you get a radio–ready sound straight off the bat.

The EM-USB's tall stand keeps it a good distance from the desk, which should minimise desktop reflections. It comes with an impressive software package including Pro Tools First, Tracktion Waveform, and a large bundle of plug‑ins.

MXL's affordable Tempo looks more like a studio mic than a USB one, but comes with a tripod stand and has a headphone amp built in. It's also available in a variety of colours.

A sturdy, weighty mic, Rode's NT-USB Mini is attached to its desktop cradle magnetically, so you can easily pop it off to attach it to a conventional stand when needed.

Samson's shiny Satellite microphone has three switchable polar patterns, and the rear leg of its tripod stand can be used to adjust the mic's angle on your desktop.

The retro-looking MV51 has a touch panel on the front, with which you can engage a number of DSP EQ and compression presets for various different sources, including vocals and instruments.

For criticial comparison, you can download a ZIP file of hi–res WAV audio examples in the righthand Media sidebar of this article or use the link below.

For these audio examples, I placed each USB microphone on my desk directly in front of me, using the stands they came with, while reading a short passage from an iMac screen behind the mic, in a fairly typical example of a home podcasting setup.

I tried to keep all the microphone capsules around the same distance from my mouth (10 inches), but the heights of the different stands meant that some were higher or lower than others. I also tried to keep each reading as consistent as possible, so hopefully the underlying sound of each mic should shine through.

Where the microphones offered different polar patterns or processing options, I disabled any compression, EQ or DSP, and used them in their cardioid modes.