Audio-Technica's AT2020 is often recommended as an modestly priced mic that gives much better results than you'd expect. A USB version must have seemed a no-brainer to Audio-Technica, and the AT2020 USB was released a few years ago. As with many of the early USB mics, though, this lacked features, such as a headphone output, that are needed for some applications. The latest version, the AT2020 USB+, puts that right, and bundled accessories include a conventional standmounting swivel clamp, a small tripod desk stand and a 10-foot USB cable. 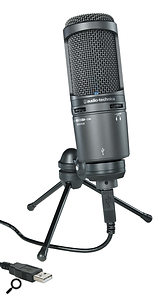 As with the other AT2020 variants this is a side-address, medium-diaphragm (16mm diameter) cardioid mic, and its back-electret capsule features a low-mass diaphragm with a frequency response in excess of 20Hz to 16kHz, and a maximum SPL handling of 144dB (1kHz at 1% THD). Power is drawn from the USB port, the standard full-size USB connector taking the place of the usual XLR socket. A blue LED inside the basket confirms that the mic is powered up. The signal-to-noise ratio is quoted as 74dB (1kHz at 1Pa), which equates to a self-noise or EIN figure of 20dB. This isn't exceptional but it's adequately low for typical close-miked studio applications, which is precisely what this mic is intended for. There are no pads or filters, so any necessary low-cut EQ must be applied after recording. Pads shouldn't be necessary, though, given that the mic can handle pretty high SPLs.

The USB side of things caters for 16-bit A-D conversion (which can accommodate a dynamic range of over 90dB) and a sample rate of 44.1kHz. As well transmitting the mic signal, the USB connection brings stereo audio back from the computer. Headphones are plugged into the mini-jack socket on the side of the mic and a thumbwheel potentiometer governs the headphone level, while another adjusts the balance between the direct signal from the mic (for latency-free monitoring) andthe computer's stereo output. Being a class-compliant device, the AT2020 USB+ needs no additional driver to be used with Apple operating systems (OS X, iOS), and a suitable driver should download automatically for Windows if one isn't already installed.

Speech recordings confirmed that this mic has essentially the same sound character as its wired counterpart: rather than sounding completely neutral, it does add a hint of warmth to the lower mids in a vocal, and it imparts a very slightly compressed quality that's mildly reminiscent of some valve mics. In other words, it has a slightly flattering tonality. In past tests we've found the AT2020 to be kinder to female vocals than many budget microphones, and there's nothing to suggest that this version will be any different in that respect. The AT2020 USB+ is well suited to a wide range of vocal styles, though, and it can also double up as a very capable acoustic instrument mic.

I didn't perceive any problems at all in terms of background noise, and you really shouldn't be put off by the 16kHz upper end of the quoted frequency response, or the 16-bit conversion, because neither have any detrimental effect on the sound quality in normal use. This mic can still pick out transient detail while staying warm and smooth, exhibiting minimal distortion or unnecessary noise. Its headphone output is very clean and loud, and the ability to balance the mic and computer return signals is ideal if latency is normally a problem on your system.

I've always been surprised by how well the AT2020 works, almost regardless of who or what you put in front of it, so this updated USB version is most welcome.