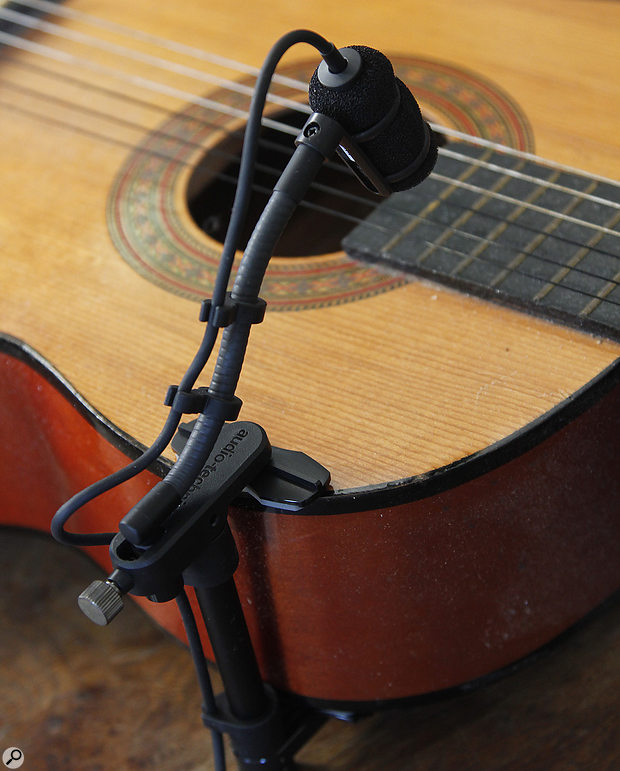 Audio-Technica's popular ATM350a mic is now available with a dedicated acoustic guitar mount. We put it to the test!

Audio–Technica's ATM350a is a very small-bodied, cardioid–pattern, back-electret capacitor microphone, and it's available in a range of kits, each with different mounting options to allow it to be fixed to various instruments including acoustic guitar, brass, violin, woodwind, piano and drums. In addition to these application-specific kits, you can also buy the microphone and various UniMount accessories separately, so you could buy one microphone and multiple mounting systems if you choose.

We were sent the ATM350GL acoustic guitar system for review, which comes in a semi-rigid, foam–lined case that fastens with a zip and has an internal mesh pocket for storing the cable and the mount. The mic itself is around 1.5 inches long and a hair under half an inch in diameter, so it is easy to position without it getting in the way of the guitarist's picking hand. A switchable 80Hz, 12dB/octave high-pass filter switch is located on the inline power module that fits onto the far end of the supplied cable. Connection to the mic is via small four-pin connectors at either end of the cable, which is around 12 feet in length, and the power module converts the output to the three-pin XLR format that we all know and love. Phantom power of between 11 and 52 Volts is required for operation. 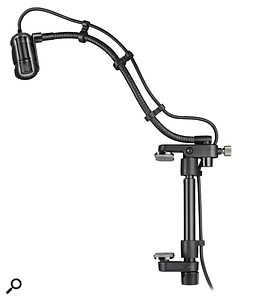 The microphone itself tucks into a tubular acoustic foam sleeve that is held in place by two plastic hoops on the end of a five–inch gooseneck arm. Two clips fitted along the arm, with a further clip on the clamp itself, hold the cable tidily in place and reduce cable-borne vibrations. In this system, the gooseneck fits into a socket on the guitar body clamp and is secured there by a thumbscrew.

A second knurled thumbscrew at the back end of the guitar clamp allows the width to be adjusted to accommodate different guitar body depths. The clamp can be expanded from its 85mm minimum to over 135mm, so should fit even the deepest guitar body. Rubbery pads on the clamp jaws protect the surface of the instrument, and I found that the gooseneck stays reliably where you put, and allows for a reasonable range of miking options.

The microphone can handle very high sound-pressure levels without the need for a switchable pad — the specified maximum SPL is a huge 159dB (1kHz at 1 percent THD) — and the signal-to-noise ratio is quoted as 65dB (1kHz at 1Pa). The response curve shows the mic to have a nominally flat response, with its -3dB points at 40Hz and 20kHz.

During my tests I found that more mic gain was required than with more conventional studio mics, but given that the mount always puts the mic very close to the guitar, getting enough gain was never an issue. Noise didn't present a problem either, for the same reason.

I found the ATM350GL to be capable of very good and repeatable results.

Performance-wise, I found the ATM350GL to be capable of very good and repeatable results, but with one caveat that is particularly relevant if you are one of those players who rest their picking hand on the body or touch the guitar top between strums. I set the clamp near the neck end of the body, with the mic hovering above where the neck joins the body, and found that touching the guitar top resulted in a fairly obtrusive thump, as some vibration clearly still makes its way to the microphone despite the isolating effect of the foam mount. Switching in the high-pass filter helped here, but there was still a bit of audible thumping unless I played with my picking hand hovering over but never touching the body, which I don't usually.

Putting in a low-cut filter using a software EQ set to 130Hz, 12dB/octave improved matters greatly, but did rob the guitar sound of a little depth. If you are using the guitar part in a mix with other instruments, trimming some low end is often necessary to make the instrument sit in the mix without clouding the lows, and in that context this mic would work very well. It might be less suitable for a solo performance, however, where you want to exploit the full range of the instrument. The results will vary depending on the instrument, the playing style and where on the guitar body you fit the clamp, and is something to bear in mind before deciding if this is suitable for your needs, but apart from that it came across as very well-balanced and natural.

There's little competition to the ATM350GL in this price range. The closest I can think of is the various instrument-miking options from DPA, although they are much more expensive.

Other than the LF vibrations issue, this microphone system is extremely practical, and provided you're happy to cut some low end from your guitar, should be capable of great results.