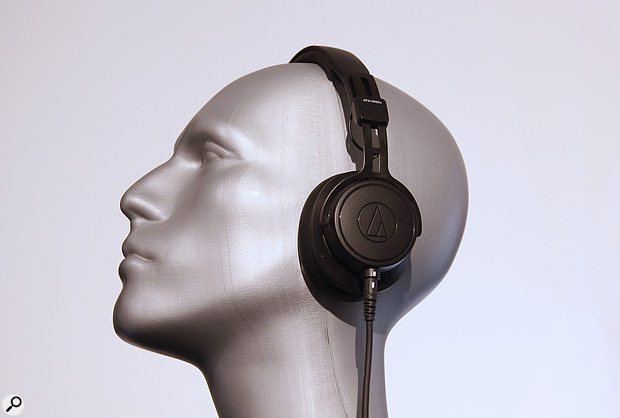 The newest model in Audio-Technica's popular Mx series of headphones majors on portability, ruggedness and comfort.

Choosing a pair of headphones can be a bit of a trial. Do you need closed-back or open-back? Moving-coil, planar magnetic, electrostatic? Black, or, well, black?

Another factor in play is how the phones should interface with your head. Most headphones intended for studio use are 'over-ear' types, with earcups that completely surround the ear, sitting flush against the skull. However, you can also buy 'on-ear' headphones with smaller, nearly circular earcups that are designed to rest directly against the outer ear. The classic design of this type is the Sennheiser HD25-II, famed for its ruggedness, portability and, above all, for the excellent isolation it delivers.

Pretenders to the HD25's crown have been few, but Audio-Technica are making a pitch for the same market sector with their new ATH-M60x. The latest addition to A-T's range promises the same sound quality as their hugely popular M50xs, in a format that will suit engineers needing something lightweight and compact.

The HD25s have a number of distinctive design features, most notably their split headband and the grooved strip that allows each earcup to be moved up and down for optimum sizing. The M60xs are arguably more conventional in appearance, slightly larger and, if anything, even more black. They carry over several design elements from Audio-Technica's over-ear models, albeit on a smaller scale. The earcups are mounted on gimbals which allow them to rotate in the vertical plane; these gimbals are attached to curved metal strips that slide up and down, and which are in turn connected to the headband by a hinged joint that permits a small but adequate degree of 'fore and aft' rotation. Signals are fed into the M60xs through a single locking 2.5mm jack socket in the base of the left earcup, which hosts removable cables. Long and short straight and long curly specimens are supplied, along with a simple pouch that tidies everything away but doesn't offer any substantial protection.

In comparison with the HD25s' circular earcups, those of the M60x are more elongated. I found them much more pleasant to wear, as the cushions — which are field-replaceable, should the need arise — rest lightly on the outer ear, rather than clamping themselves against it HD25‑style. The flip side of this is that the M60xs don't come anywhere near matching the Sennheisers on the isolation front; in fact, they aren't noticeably better than the M50xs at blocking external noise.

In most respects, the M60xs' specifications are the same as those of the M50x. They offer the same quoted frequency response of 15Hz to 28kHz, which is equally meaningless in the absence of any specified tolerances, and the same 38Ω impedance. The M60xs are said to be 3dB more sensitive than their elder brother, but with the M60xs and M50xs plugged into the two headphone outputs on a JoeCo Cello audio interface, they seemed pretty well matched without any level adjustment. In practice this means you'll have no difficulty driving them from portable recorders, laptops, mobile phones and so forth, which is probably important given their intended uses.

Sound-wise, there was more difference than I expected between the two. The M50xs aren't the most neutral headphones in the world, with their chunky bass and cheerful presence boost in the upper mids, but this voicing has helped to make them immensely popular. A strong treble boost is also part of the M60xs' sound, but it starts lower down the frequency spectrum, particularly emphasising the 'clacky' 2-3 kHz area as well as the sparkle of cymbals and the sizzle of sibilants. The low bass isn't hyped, as it is on the M50xs, but neither is the bottom end particularly clear. The lift in the treble region also makes the overall sound quite harsh on some material, and I generally preferred the HD25s for listening to music.

I don't think the M60xs would be my first choice for mixing, then, but the point of developing an on-ear version of the M50xs was never to create the ultimate mixing tool. Audio-Technica's goal here is to present the M-series 'family sound' in a compact, portable and rugged format that will particularly suit live‑sound engineers, DJs and location sound recordists. If you're a member of one of those gangs and comfort is more important to you than isolation, they have much to offer.

The baby of Audio-Technica's Mx-series headphone range is optimised for life on the road. If you need a pair of headphones to be rugged, portable and comfortable above other factors, these may be exactly what you're after!