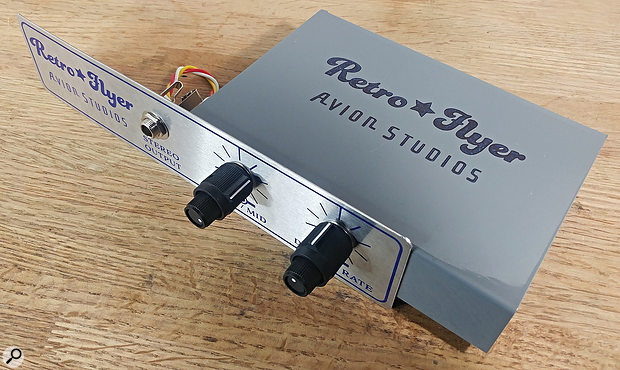 It’s amazing that, after nearly 50 years, there are still add-ons being manufactured for the original Rhodes pianos. The most famous of these was the Dyno-my-piano from the 1970s, but today that role is fulfilled by the Retro‑Flyer, which fits both 73-note and 88-note Mk1 and Mk2 instruments. It adds an impedance-matched preamplifier and a mid-range EQ, which offers a broad cut or boost of up to 7dB centred on 800Hz, along with a high-pass filter offering cutoff frequencies at 20Hz, 60Hz or 130Hz, and a stereo tremolo.

When I received the Retro‑Flyer I was a little dismayed by the installation instructions, because they have no diagrams to guide the uninitiated. But when I opened my Mk1 Rhodes 88 I realised that installation was simple. The unit is designed to sit behind the metal plate that runs behind the keys, replacing the existing nameplate, volume knob, bass knob and output socket with a new nameplate, a dual-concentric knob for volume and EQ, a second dual-concentric knob for tremolo rate (which runs from around 2Hz to 12Hz) and depth, plus a stereo output socket. However, the switch for the high-pass filter modes sits at the rear of the Retro‑Flyer so this is something that you’ll want to set and forget. Having installed the unit physically, you then use the supplied cables to connect it to the output from the harp’s pickups and to the external 24V PSU.

Other than that provided for the sustain pedal rod, there are no holes in the body of a passive Rhodes, so you have to decide where you want to position the power supply. You can mount it internally, but then you’ll have to make a hole in the piano for a mains cable or an IEC socket. Alternatively, you can leave the power supply outside the piano, which means running the DC cable into the case, either through a small hole or perhaps a groove cut into the edge of the lid. Not wanting to make any permanent changes to my Rhodes, I decided to test the Retro‑Flyer as an external unit, running the cable from the pickups out of the piano to the preamp. This meant that it would be trivial to return the piano to factory standard, and it also made it simple to compare the original sound with that obtained from the Retro‑Flyer, simply by leaving the lid off and swapping the pickup connection. If I wanted to make this a permanent arrangement I would have to find or make a suitable enclosure but I’m sure that, if I were to use the Retro‑Flyer for performing or recording, I would install it as intended.

Most obviously, it makes the Rhodes louder. It also makes it marginally cleaner, because the active preamp generates very little noise but sends a much hotter signal to your amp or desk, so less gain has to be applied further down the signal path. In addition, it can make it sound punchier, because the 800Hz boost emphasises the piano’s mid-range, which is what you tend to hear in a mix. Alternatively, you can use the EQ to scoop out some of the middle, making the frequency response sound flatter and allowing the low and high frequencies more room to breathe when you play the instrument in isolation. In my view, the Retro‑Flyer also makes the piano more useful than before because, like many other players, I like using the Rhodes with tremolo — whether generated by an effect pedal or a suitable guitar amp for a simple mono effect, or by something a bit more sophisticated for a stereo auto-panning effect. The Retro‑Flyer does both and I liked the character of the results, which have a nice shape and don’t unduly affect the tone or the perceived loudness of the instrument. Finally, I felt that the modified piano played more nicely with the rest of the band when the high-pass filter was switched in at either 60Hz or 130Hz, because this stopped it from arguing with the bass guitar and my bass pedals.

Is It Worth The Cost?

That’s a tricky question to answer. For some players, it will seem to do little more than make the piano louder and add tremolo which, while worthy, is an outcome that can be obtained by other means for less outlay. Other players will notice that it modifies the tone and dynamics of the Rhodes piano and, if they are devoted to the sound and feel of the original, they may not like this. But some players will think that it’s fab, adding solidity to the Rhodes sound, making it punchier as well as louder, helping it to sit more comfortably in the mix, and adding an appealing tremolo. Of course, these benefits can be achieved in the studio using a suitable preamplifier, desk and outboard gear, so I suspect that the real value of the Retro‑Flyer will lie in the realm of live performance, where players will find it easier to obtain the right sound on stage and engineers will find it easier to place the piano in the mix.

Perhaps the best way to look at the Retro‑Flyer is this... Well-preserved Rhodes 73s and 88s can now sell for prices in excess of £2000, so installing a Retro‑Flyer would only add around 10 percent to the cost of buying one. It would make the piano a somewhat different instrument but, dare I say it, a somewhat better one. Routing the power is a bit of a pain but, if I were to buy a Rhodes today, I would consider having one fitted. If you play a vintage Rhodes on a regular basis, you should certainly look more closely at the Retro‑Flyer.