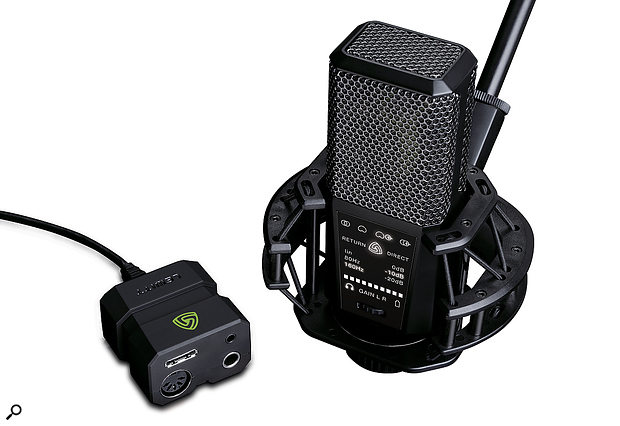 There are many USB microphones around today, but Lewitt’s offering has some surprising and useful extra features.

To call the Lewitt DGT 650 ‘just’ a USB mic would be rather understating the case. What you get is actually a stereo X-Y mic that also functions as a full-scale 24-bit, 96kHz audio interface. The software driver supports ASIO for Windows, Core Audio for Mac OS X, and also works with iOS devices (via a Lightning connector).

The mic can take power from USB, or it can run for around three hours using its own built-in lithium-ion battery in situations where USB power is not available. The circuitry includes a two-channel mic/line preamp with switchable high-pass filter and two pad options, and it also includes a standard MIDI input. A large hexagonally perforated steel grille protects the mic capsules, and all the controls and display are on the ‘hot’ face of the mic body.

Clearly, fitting all the necessary connectors to the mic body would make the whole thing somewhat unwieldy, hence the small box that connects to the mic via the mic’s 18-pin connector. You then have a choice of hooking up the box via the included USB or Lightning connector cables to feed to your computer or iOS device. Unfortunately no cable is included for pre-Lightning iOS devices. It isn’t clear how much of the electronics resides in the mic and how much in the box, so I’ll just refer to it as the breakout box.

The rechargeable Li-ion battery, which resides in the mic body, is connected to a micro-USB port for use with a third-party USB charger. Where USB power is available, the mic takes its power from that and the battery charges at the same time. The remaining connections comprise a headphone output on a stereo mini-jack, a quarter-inch TRS mono/stereo line input jack and a five-pin DIN connector for the MIDI input. A nice touch is that the breakout box body has a groove molded into it and comes with a Velcro strap, so that it can be secured to the mic stand or tripod, avoiding stress on the cables.

In its stereo mode, two 17mm-diameter, back-electret cardioid-pattern capacitor capsules, set at a 90-degree angle, operate as a stereo X-Y coincident pair. However, the DGT 650 can also function as a front-fire mono cardioid microphone for recording vocals or instruments where stereo miking is not appropriate. The line input comes into play in the DGT 650’s Singer/Songwriter mode, in which a mono cardioid mic feeds one channel and a line-level signal the other. Finally, it is possible to bypass the mic altogether for stereo line-in operation using a TRS quarter-inch jack going into the input. The gain may be adjusted separately for the mic and line inputs and the MIDI input is available in all modes.

Before looking at how all that goes together in more detail, it’s worth checking out the impressive specification, which quotes a dynamic range in excess of 110dB (A-weighted) and a bandwidth of 20Hz to 20kHz. Self-noise depends on the gain setting and the recording mode but is generally between 25 and 30 dB — maybe not as quiet as some of Lewitt’s dedicated studio mics, but more than adequate. Maximum SPL is 140dB and there’s a choice of -10 or -20 dB input pads. There’s also a choice of two low-cut filter frequencies: 80 or 160 Hz.

A back-lit panel of icons shows most of the information, and a thumbwheel, which also incorporates a push switch, steps around to select and then adjust them. A horizontal bargraph-style display shows the value. This section accesses the recording mode selector, pad and filter switching, preamp gain adjustment, output level control, direct/DAW monitor balance and headphone level. This all works well enough — you just keep pressing the wheel to step through the options until the correct icon is illuminated, then turn the wheel to change the setting. Even so, the included mini manual tells us that there is a free piece of control software that you can download that makes setting up even easier. The full manual may be downloaded from the Lewitt web site, though the short manual should be enough to get you started.

At the time of writing this review, the Windows version of the Control Center software was available, along with the required Windows audio driver, but the Mac OS X version was still in development. However, no driver is needed to use the mic with Mac OS X audio applications and, as the mic is easy enough to set up from its own control panel, the delay to the remote setup software is certainly not a deal breaker.

USB mics aren’t always taken seriously, but this one looks every bit as professional as Lewitt’s mainstream studio mics. It comes in a foam-lined cardboard box with a solidly engineered, custom-designed suspension mount and desk tripod, as well as a foam windshield and cables for both USB and Lightning connection.

The audio quality from the mic is very clean, with naturally airy highs and no obvious added ‘character’, which is probably a good thing for a mic that will be used with both voice and instruments. The controls are easy to use and operation is largely intuitive. Having both mono and stereo modes is very useful if you want to use the mic to capture a live performance, and I also have to say that this is the first time I’ve come across a MIDI port built into a USB mic. On my Mac this was, again, just a case of plug in and play. The mic-plus-line mode is very handy for guitar and vocal recordings, as the line-input impedance is high enough for the direct connection of an electric guitar. Using my Beyer DT770 headphones I found there was plenty of level on playback.

Overall, then, I have to conclude that Lewitt have managed to cram rather a lot into this microphone, but they have done it in great style. The build quality matches that of their premium studio mics, and the audio quality makes the DGT 650 suitable for studio use as well as podcasting, location sound gathering and recording your gigs. There’s the option of using the mic in stereo, and the instrument input is handy for guitar players and suchlike, while the MIDI input is perfect for those musicians who have an old-school MIDI controller keyboard or MIDI guitar system without a direct USB MIDI connection option. Furthermore, for iOS users Lewitt have a free recording app you can use with the mic. Lewitt call the DGT 650 a USB multi-tool, and I think that pretty much nails it!

There are plenty of very worthy USB mics, but the combination of mono/stereo operation plus line and MIDI inputs means that to get the same functionality you’d need a separate stereo mic and interface to do the same job.

A high-quality USB microphone that can work in stereo as well as offering line and MIDI inputs. Lewitt have come up with an excellent and compact alternative to using separate mics and interfaces.