While high-quality clones of Bill Putnam’s 1176 compressor abound, stereo versions of that much-loved design are rather less common — especially at this price.

One of the most iconic of outboard compressors is the Universal Audio (later Urei) 1176. Designed by Bill Putnam in 1966 and (several versions and a reissue later) still available from Universal Audio today, the mono 1176 holds a stellar reputation amongst studio engineers on bass, guitars and vocals. A later accessory, the battery-equipped 1176 SA allowed two 1176 compressors to be coupled together when used across a stereo mix bus. 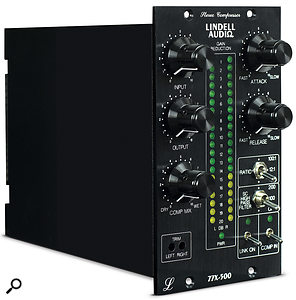 Fast-forward to the present day where the advent of the 500–series format has enabled companies large, small, miniscule and DIY to bring us versions of classic hardware at widely varying prices and you’ll find Sweden’s Lindell Audio, who set out in 2010 to “produce recording equipment, designed by engineers, for engineers”. Lindell‘s first 1176–inspired 500-series unit was the mono 7X–500 (reviewed in SOS October 2013) that replaced the 1176’s fully variable attack and release times with switchable slow, medium and fast speeds and reduced its available compression ratios from four down to three. In compensation, the 7X–500 added a high–pass side–chain filter to help prevent headroom–chomping bass frequencies from triggering compression, together with a wet/dry mix control that made parallel compression easy.

Lindell’s 77X–500 essentially bundles two 7X–500 circuits into a single, double–width 500–series module, but it also reinstates the fully variable attack and release controls, as well as adding a switchable, battery-powered stereo–link circuit that’s analogous to the 1176 SA. Due to front–panel space restrictions, the controls for attack and release times and input and output levels are common to both channels, and so simultaneous dual–mono operation isn’t really an option on separate sources. Other significant changes from the 7X–500 are in the side–chain high–pass filter, where the upper frequency is reduced from 300 to 200 Hz, and in the attack and release times, which are identical to those of the original 1176.

Like the 1176 and 7X–500, the 77X–500 is a FET (Field Effect Transistor) compressor in which the FET acts as a voltage–controlled resistor. All three are capable of very fast attack and release times which, at their fastest settings (20 microseconds and 50 milliseconds respectively) can add compression distortion to the audio signal — high speed, minute fluctuations in signal level (arising from the speed of both attack and release) sound like distortion. It’s also worth noting that, in common with its ancestor, the 77X–500 is a ‘feedback’ compressor, in which the side–chain input is tapped from the compressor’s output (rather than directly from its input), and that its output is balanced via a custom–made output transformer, which will also add a little extra character to the audio passing through it.

There are a couple of points inherited from the 1176 to bear in mind with the 77X–500. First, its input control acts much like the threshold control of a more conventional compressor, in that the more you wind it up, the more the incoming signal exceeds the threshold of your chosen ratio. Second, in addition to governing the gain makeup, the output control can be used to drive the output transformer into saturation. With those points in mind, it’s simply a case of experimenting with input levels, compression ratios, attack and release times and wet/dry mixes, and driving the output transformer to taste. Although the twin, 20–LED meters faithfully display the amount of gain reduction, they’re probably the last thing that I’d consult because, for me, the 77X–500 is a compressor that cries out to be driven by ear and emotion, not by eye and calculation. 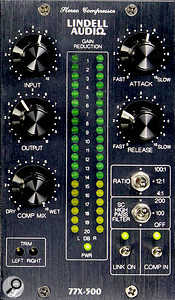 Interestingly, I’ve not (yet) had the opportunity to use a UA or Urei 1176 but, based on my knowledge of similar processors and what I’ve read, the 77X–500 seems to sound and behave very much like its inspiration. However, I don’t think the ‘1176 authenticity’ argument actually matters all that much — the most important thing is that on every single mono or stereo source that I ran through it the Lindell Audio 77X–500 delivered the compression that I dialled in and sounded unfailingly musical, unless I wanted it to be otherwise.

The Lindell 77X–500 isn’t an exact clone of a stereo 1176. Indeed, it’s not billed as such. While it does appear to deliver significant amounts of that processor’s operational character, this is a very fine compressor in its own right and, given the level of performance of which the 77X–500 is capable, it represents extremely good value for money.

There really aren’t a huge number of stereo 500–series-format compressors around and most of those that I’d consider as alternatives to the 77X–500 either cost rather more or employ a different approach to gain reduction. So, if you already own a 500–series rack and are in the market for a stereo bus compressor, you really should give the Lindell Audio 77X–500 a try.

There are many mono compressors for the 500-series format, including some FET–based designs, but there are fewer true stereo units. In fact, this Lindell unit is, at the time of writing, the only stereo FET–based compressor for this format that I’m aware of. Most other stereo 500–series compressors, such as the Dramastic Audio Obsidian 500, Alta Moda Hippo, Smart Research CL1A, IGS Audio S–Type 500 and Serpent Audio SB4001, are VCA designs that are based, at least loosely, on the SSL mix–bus compressor. The Elysia Xpressor 500 and Shadow Hills Dual Vandergraph offer slightly different takes on the stereo VCA approach and a different sound is offered by the Buzz Audio Essence, which is an optical compressor.

There aren’t many stereo FET compressors available in the 500–series, and certainly not at this sort of price.