It could well be argued that Mackie’s original SRM450 and 350 powered speakers made a huge contribution towards making affordable plastic-box PA speakers respectable. In addition to being the mainstay of many a small PA system, the SRM350 is often seen pressed into service as a floor monitor, where its asymmetrical cabinet shape allows it to sit at the appropriate angle when used on its side. 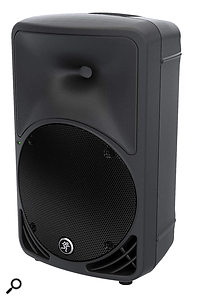 Both models are now on their third incarnation, the most noticeable spec changes being a marked increase in amplifier power rating and the inclusion of optional voicings, but unless you look at the back panel, the outward appearance of the new SRM350 is much the same as its predecessors, except the Polypropylene moulding is now closer to black than grey.

There’s a 10-inch woofer tucked away behind a protective metal grille, above which is a 1.4-inch titanium dome compression driver feeding a horn flare to produce a horizontal dispersion of 90 degrees and a vertical dispersion of 80 degrees. There’s the same familiar metal handle built into the top of the cabinet, a recessed side carry handle and a standard pole-mount socket in the base, plus threaded inserts at the top and bottom to allow for permanent mounting.

While the original models were powered by a pair of traditional Class-AB amplifiers, this new version uses a Class-AB amp to drive the horn and a Class-D amplifier to drive the woofer (power comes from a switching-mode PSU). For the tweeter there are 200 Watts of peak power available (100 Watts continuous) while the woofer’s amp is rated at 800 Watts peak (400 Watts continuous). Using a Class-D amplifier and a switch-mode PSU makes for a considerable saving on heat and weight (this version is 10.4kg, over a kilo lighter than the v2), while also being more energy efficient. The crossover frequency is set at 3kHz, a maximum SPL of 126dB at one metre (just 2dB less than the larger SRM450) is quoted, and the -3dB frequency response is given as 55Hz to 20kHz.

While the original design was created in conjunction with RCF, a manufacturer that Mackie’s parent company Loud Technologies owned at the time, this new version was designed in collaboration with respected PA company EAW (Eastern Acoustic Works, again a Loud company). The drivers are new, while the DSP processing section offers a choice of voicings for different applications, as well as an automatic feedback killer that identifies and notches out up to four problem frequencies. Using DSP also allows for more precise driver alignment to minimise phase errors at the crossover point. Protection is also handled via the DSP, which kicks in to protect the drivers from abuse employing both peak and RMS limiting and thermal protection.

The two-channel input section, which uses ‘combi’ connectors, can handle mic-, line- or instrument-level signals without having to switch gain ranges, and there’s a ‘thru’ XLR connector that can pass on a mix of both inputs or just input one. The thru output is passive when the Ch 1/Mix switch is in the out (Ch 1) position and active when the switch is in the Mix position. There’s also a pair of RCA phono sockets for the connection of music players.

A button steps through the PA, DJ, Monitor and Soloist voicing options, a feature that I first noticed in Mackie’s dual-concentric DLM-series speakers. PA mode is full range, the documentation tells us, “but focuses on mid-range clarity where vocals often reside”. Mackie sent me a link to the detailed frequency response plots for the speaker and this confirms that there is a mid-range scoop centred at around 2kHz with a presence hump peaking around 10kHz. This characteristic is present to a greater or lesser degree on all settings. 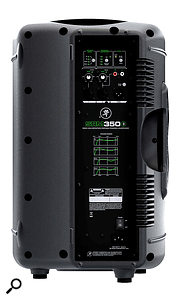 As you can see from the response curves, all of the EQ presets have a slight mid-range dip.

To see how the new SRM350 performed, I set them up alongside my trusty old original 350s and set the new speakers’ voicing to PA. The tonal difference was quite noticeable, with the old model sounding just a touch boxy by comparison with the new one. The PA setting has a strong sense of ‘presence’ emphasised by the mid-range scoop and I found that feedback can be an issue at high gain settings, especially if the speaker voicing coincides with your mic’s presence peak. I’ve noticed a similar thing with my Mackie DLM8s, where the presence boost seems more pronounced and requires some pretty forensic EQ to achieve a decent level before feedback.

I found that dipping the HF on the mixer by a couple of dBs and bringing up the mids by the same amount produced a more natural vocal sound, though I would have preferred the PA position to be nominally flat rather than deliberately ‘voiced’ so that I could make my own EQ decisions. Other than that, the vocal sound comes across as well defined and free from nasal boxiness. If you’re using a subwoofer with these, then it would also be worth experimenting with the Solo and Monitor positions to see if they produce a vocal sound more to your liking.

The anti-feedback system, when active, inserts up to four notch filters, each just under a semitone (16th octave) wide, and each is automatically deployed when feedback is detected. Pressing and holding the in/out button clears the filters. Though such measures can help coax a few more dB out of a system running close to its feedback threshold, the benefit may not be as much as you might imagine, and the filters, though fairly narrow, still affect the overall sound to some extent. What is noticeable is that when loud feedback does occur, the shriek takes on an unpleasant aliasing character, presumably due to an overload in the DSP section, so if you plan to use the anti-feedback feature, it may be best to ring out the system before the show rather than simply leaving it on ‘guard duty’.

In terms of clarity and flexibility, the new SRM350 can be considered a step up from the originals, and while not giving the user the option of a flatter PA voicing mode seems somewhat short-sighted, as long as you are aware that you may need to lift your mid-range EQ slightly to fill out the scooped mids, the SRM350s do a great job. While I’m not a huge fan of the built-in anti-feedback system because of its impact on the overall sound, it could be of real benefit when the speakers are used in a monitor capacity, and it can help claw back a few dBs of headroom. The build quality is as tough as ever, you can plug mics directly into the speakers if your mixer blows up, and the price is very competitive. There’s enough volume to use a pair as a mainly vocal PA for pub band gigs, while teaming them with one of Mackie’s powered subs gives you a very capable full-range system that will still fit into the back of your car. Like its predecessors, the new SRM350 is a solid workhorse of a speaker.

The main competition for the SRM range comes from companies such as JBL, Alto, EV, PreSonus, RCF and indeed many other speaker companies, though few include such a comprehensive feature set at this sort of price.

The SRM350 v3 builds on the concept of the original by incorporating more features, though the compulsory EQ mid scoop may not please everyone.

£295 per speaker including VAT.