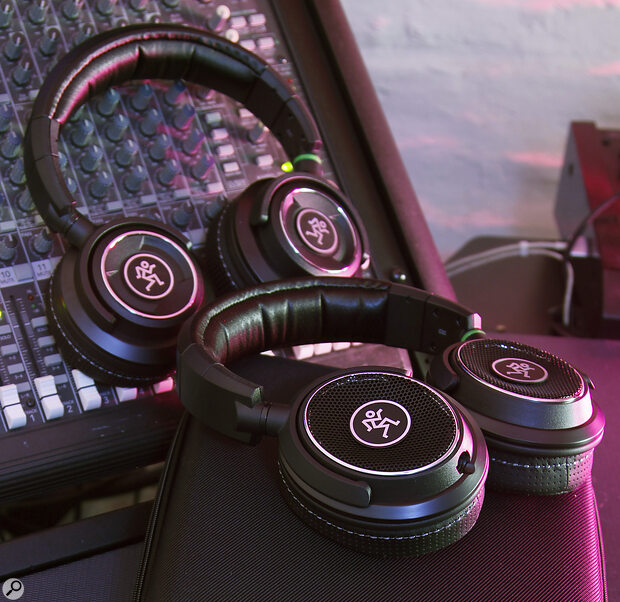 Mackie’s latest cans prove themselves to be serious monitoring tools.

Having been impressed by Mackie’s lower‑cost MC‑150 and MC‑250 headphones (reviewed SOS March 2019), I was keen to see how their more upmarket MC‑350 and MC‑450 models perform. Both offer the expected 20Hz to 20kHz frequency response and other well‑specified technical parameters, but user comfort has also taken a high priority, with both the adjustable headband and earpads being faced with leather on both models. Having been the victim of some big‑name European headphones where the plastic headband eventually degraded to a sticky mess, that’s one refinement I can appreciate, though it might not go over so well with vegetarians.

Both models come with three connection cables, which attach securely to the phones via a bayonet locking connector. There’s a 3m long cable with fabric covering, a standard 1.2m cable, and for more consumer‑oriented purposes, an additional 1.2m cable with volume control and microphone. I suspect that most studio users will fit the three metre cable and never change it. All three cables are fitted with a mini‑jack plug and there’s a gold‑plated mini‑jack to quarter‑inch adaptor provided. The cables have their own semi‑rigid zip‑up pouch that resides within the larger semi‑rigid zip‑up pouch that holds the headphones.

The MC‑350 is a closed‑back headphone and as such is a good choice for monitoring while tracking, as there’s minimal spill when compared with an open‑backed design. Fitted with 50mm drivers in a tuned housing, there’s plenty of power to ensure that the low end comes over cleanly. The MC‑350’s impedance is 32Ω and its dynamic range is specified as 97dB. The earcups are round and deeply padded, and there’s plenty of headband adjustment available so you can decide how snugly you want them to fit. The headband uses spring metal extensions that slide in and out from the upper part of the headband, providing a positive and simple means of adjustment.

Mackie’s MC‑450 is an open‑backed model, a topography that usually provides a more transparent low end than a fully enclosed phone, which is why open‑backed phones are so popular for mixing applications. This model uses a 42mm driver and has a slightly higher impedance than the MC‑350, at 54Ω. Its dynamic range is also slightly greater than that of the MC‑350, at 101dB. It has the same general styling as the MC‑350, other than that the earcup is oval rather than round, and there’s a grille on the outside face rather than a solid plate. The headband arrangement is exactly the same, though.

The ‘hear‑through’ performance of the phones is almost the same as not wearing them, so if somebody speaks to you while you have them on, you’ll hear them normally — unless the music is drowning them out, of course. While the phones are necessarily a snug fit, they are actually pretty comfortable to wear for long mixing sessions as long as you adjust the headband appropriately.

Sonically, both sets of phones correlate well with what I hear from my monitors, and my own test mixes, which incorporate some binaural panning, seemed to sound more three‑dimensional than when I’ve listened to them on other headphones. Every good pair of headphones paints its own picture of the truth and I guess these are no exception, but I was impressed by the solid, detailed sound that puts every instrument and voice in its place. There’s low end without boominess from both phones, though to my ears the open MC‑450s sound maybe just a hint tighter in the lows. Both models allow the highs to come over as open and detailed rather than tending towards brashness, and the sense of stereo placement is excellent, though clearly still differs from what you hear on loudspeakers as there’s no inter‑aural crosstalk. While I find that a lot of phones place the sound ‘inside’ my head, these manage to push it forward enough to create a more natural soundstage.

I was impressed by the solid, detailed sound that puts every instrument and voice in its place.

Clearly these are not budget phones, but given the quality on offer, the price seems very reasonable to me. And don’t let the Mackie brand name put you off just because their previous headphones were set at a much lower price — these are serious phones and it is obvious that a lot of thought has gone into their design. If you work in a room that is acoustically imperfect, as many of us do, then one of these models could really improve your monitoring situation. If you need phones to handle both tracking and mixing, then go for the MC‑350s as they are still accurate enough for mixing, but if you want a dedicated pair just for mixing, the MC‑450s are probably the best option if they are still within your budget.

These new headphones represent a jump up in price compared to Mackie’s previous offerings, but they’re also seriously capable, and offer much in both tracking and mixing scenarios.