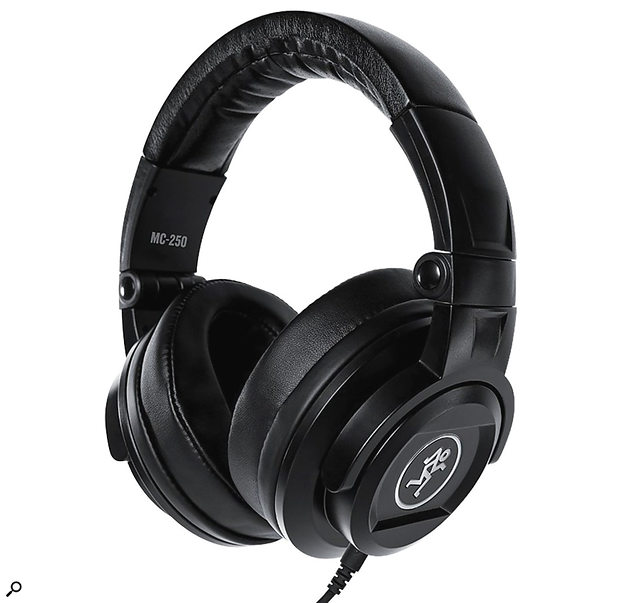 Mackie's new MC range of close-backed headphones are refreshingly devoid of over-fancy styling, and this gives them a reassuring 'get the job done' appearance. Both models look very similar, with black plastic phone shells, adjustable padded headbands and locking, removable cables. In terms of specification, the main difference between the two models — which outwardly appear virtually identical — is that the MC-250 has a wider quoted frequency response of 10Hz to 20kHz, and is claimed to be more suitable for mixing than the MC-150, which still manages a 15Hz to 20kHz response. Both models have 50mm drivers. The sensitivity figure is almost irrelevant, since both models stay clean up to health-threatening levels, and both have similar impedances (33Ω for the MC-150 and 38Ω for the MC-250).

The physical design allows the headphones to be folded up for storage and a simple but practical vinyl storage bag is provided. The 9.8-foot-long cables terminate in a 3.5mm TRS jack, and a quarter-inch, gold-plated jack adaptor is supplied. Once the cable is inserted into the headphone and twisted to lock it in place, there's no chance of it falling out. With a weight of 265g (9.35oz), the headphones, which have the usual type of soft vinyl earpads, are comfortable to wear and will sit over most normal-sized ears.

For mixing, I'd normally choose to use open-backed headphones because fully enclosed phones almost always introduce some low-end coloration, but relative to others I've used these models seem very well behaved in that respect. Compared with some of my existing studio phones, and with my Event Opal monitor speakers, both Mackie MC models came much closer to matching the sound of my speakers than you'd expect of headphones at this price, and were similar in overall balance to my AKG K-series open-backed phones.

The MC-150 seemed just a hair brighter and perhaps a touch less refined-sounding than the MC-250, which may be why Mackie recommend the former for tracking and DJ use rather than mixing — though they still sound more accurately balanced than many phones I've tried in this price range. Though similarly voiced, the MC-250s seemed a little more natural at the high end and turned out to be almost a perfect match for my monitors; once I'd got the levels set correctly, there was virtually no difference between listening to the monitors and then putting on the phones — which incidentally offer a more than decent amount of sound isolation. Of course, the way you perceive the stereo image in headphones is always different from speakers, but in this case the overall clarity and tonal balance was incredibly close, with a solid and full but non-flabby bass end matched by clear mids and plenty of HF detail. These are phones that you could certainly use for artist cue-mix duties, and could also safely rely on for a second opinion when mixing. Like the best phones, they allow you to hear 'into' a mix, to differentiate the different elements more easily. Of course, more money can buy you more accuracy — but the law of diminishing returns applies to headphones just as much as anything else in life, and if you're working in a home studio where budgets aren't endless these models represent a very practical and affordable choice.