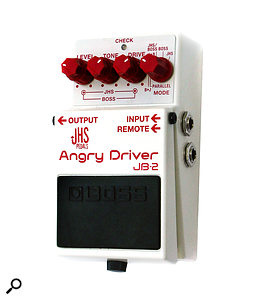 Those oh-so familiar Boss pedals have been with us for 40 years now but, to the best of my knowledge, the JB-2 Overdrive is the first example of Boss collaborating with a boutique pedal builder. US company JHS Pedals build a wide range of stompboxes (and, despite the ‘Pedals’ in the company name, some 500-series studio modules too), and one of their most revered overdrives is the Angry Charlie. The all-analogue JB-2, which can be powered from a 9V battery or an external PSU, features both the Boss BD-2 Blues Driver and Angry Charlie circuits, but the most interesting thing about it is the way in which the circuits can be combined.

At first sight the JB-2 looks like a conventional overdrive, with four knobs labelled Level, Tone, Drive and Mode, but closer inspection reveals that the first three are dual-concentric pots, enabling completely independent control over the two circuits, and the last is a rotary switch. The real magic happens with the mode switch, which allows the drive circuits to be used individually, in series or in parallel — and in serial mode you get to decide which circuit comes first in the signal path.

The first two modes are the most straightforward: one gives you the JHS circuit, the other gives you the Boss Blues Driver circuit. Mode three has the footswitch toggling between the two, which can be useful if you want a mild dose of Blues Driver to add a hint of hair to your clean sound, with the option of unleashing the Angry Charlie for solos. And because each has its own set of controls, the amount of drive, level and volume shaping is entirely independent. Mode four has the JHS circuit feeding into the BD-2 circuit and mode five the BD-2 feeding into the JHS circuit. Mode six runs the two pedals in parallel and then mixes their outputs. The LED lights red for the JHS pedal, blue for the Blues driver and, logically, purple when both are engaged.

Heard individually, the two circuits have very different characters, the Blues Driver with a cleaner, amp-on-the-edge sound, and the JHS Angry Charlie delivering a more rock-style overdrive. But when combining the two circuits some truly extraordinary overdrive sounds can be achieved. In series, you can get huge sustain but this somehow happens without excessive noise build-up, and without losing note definition. Switch to parallel mode and you can use the BD-2 to keep the note attacks clean while employing the JHS Angry Charlie to add sustain. And you can have a different tone setting for each.

A little experimentation quickly reveals that you can dial in just about any style of overdrive you want, and, even at fairly high drive levels, the sound cleans up well with playing dynamics or by backing off the guitar volume control. For the most flexibility in live use I’d recommend adding a second footswitch, but this little pedal can do so much that I can’t help but hope Boss will come out with a fully programmable pedal based on the same concept. All in all, the Angry Driver is an exceptional pedal of unsurpassed versatility and I suspect it will do very well, especially given its non-boutique price.