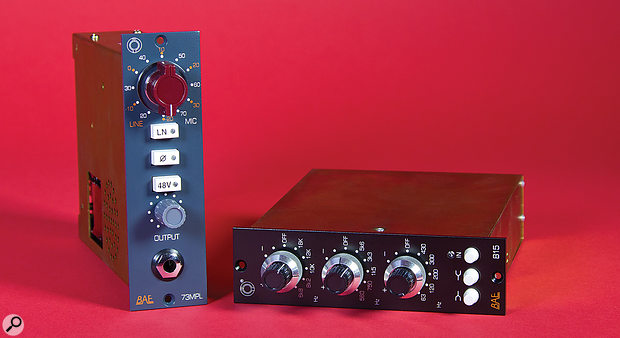 California–based BAE (originally Brent Averill Enterprises but, on the retirement of its eponymous founder, renamed British Audio Engineering by the new owner) were early repackagers of vintage Neve console modules, and the first company to replicate the 1073 channel module. Many companies have since devised their own versions of these classic preamp and EQ circuits, but BAE are amongst the more zealous in remaining as true to the original as possible. Yet while BAE stay faithful to vintage designs, discrete components, hand wiring and hand soldering, their extensive product line shows that they’re by no means mired in the past.

BAE’s first 500–series product, the 1073D, packaged a full 1073 (plus additional HF EQ options and a DI input) into a triple–width module, and its asking price matched its ambition. Now, with the release of the 1073MPL preamp and B15 EQ, the company have adopted the more widespread approach of splitting a 1073 into two single–width modules.

With its classic Neve RAF blue–grey painted front panel, Marconi–style gain knob, grey output level control and white Line, Phase Reverse and 48V phantom–power switches, the 1073MPL leaves you in no doubt as to its heritage. An unlabelled quarter–inch TS jack socket marks the high–impedance instrument DI input and a recessed, rear–mounted switch allows you to set the mic input impedance (300 or 1200 Ω).

Since the 1073MPL runs in Class A, its casing has a circular perforation on either side to allow heat dissipation from the T–03 output device. Both sides also have a large square cutout to clear the output transformer that just fits within the confines of a single 500–series slot. The discrete internal components sit on a single PCB, with all wiring having been neatly and obviously carried out by hand. Switches are the correct Elma units and both the input and output transformers are manufactured by Carnhill.

The microphone/DI input gain range is from 15-80 dB in 5dB steps. Another 6dB comes from the input transformer, so the total gain available is 71dB. The line input gain runs from –20 to +20 dB, again in 5dB steps. The maximum output level is +27.4dBu into 600Ω and the frequency range starts at 10Hz and has its –3dB point at 55kHz.

The B15 EQ module turns up with a basic black faceplate. Its three frequency bands are controlled by a trio of dual–concentric potentiometers whose chromed aluminium outer knobs select between the five available frequencies in each band, whilst their black inners provide up to16dB each way of continuously variable boost or cut. Two white buttons change the response of the high– and low–frequency bands from bell to shelving, and a third switches the EQ in and out of circuit.

As with the 1073MPL, all B15 componentry is discrete, the rotary switches are by Elma and all wiring and soldering is carried out by hand. However, departing from the classic tradition, the B15 features Jensen input and output transformers and Avedis 1122 op amps. These, alongside the absence of a high–pass filter and the presence in all three EQ bands of five selectable frequencies, means that the B15 is not a slavish recreation of the 1073 EQ. In fact, the B15 turns out to be based instead on the well–regarded but discontinued Avedis Audio Electronics’ E15 EQ — Avedis’ founder, Avedis Kifedjian, is another long–term veteran of the original BAE.

Fitting the 1073MPL and the B15 into my Radial 500–series chassis was a little challenging in both cases. The 1073MPL slid into its slot without incident, but its faceplate would not seat up against the Radial’s front panel. Whether the problem is due to the metal bracket protruding beyond the rear edge of the 1073MPL’s circuit board or to the Radial rack itself (as discussed in our review of Radial’s Workhorse Cube: http://sosm.ag/radialcube), I cannot be certain, as both the rack and the module would have to be stripped down to confirm this, but certainly something, somewhere wasn’t right.

I also had difficulty getting the B15 into the Radial rack without removing the two largish round–headed screws that protrude above the top-rear edge of its casing — I couldn’t get the rear connector anywhere near the Radial’s backplane. Removing the screws holding the switch block in place solved the problem, but I then had to remove most of the casing so that I could hold the switches in place when necessary. (Countersunk flathead screws would neatly solve this problem.)

Happily, once I’d overcome these hurdles, both units turned out to be sources of pure pleasure. I’m a big fan of transformer–equipped preamps and the 1073MPL is a very fine example of that genre. Obviously it isn’t going to sound exactly like anyone’s favourite Neve 1073, but it does have a superb sound of its own, with all the harmonically enhanced low frequencies, smooth mid–range and clear, detailed high end that you could hope for. Wind up the gain with either vocals or DI and the transformer starts adding something to the equation — and that something is very nice indeed!

The B15 EQ was a revelation. In the classic 1073 design, the EQ circuitry sits in the module’s signal path and doesn’t have its own input/output transformers or the number of selectable frequencies found on the B15. With two additional transformers interacting with their input and output signals, plus the three EQ bands that interact with each other to produce varying degrees of colouration, you end up with quite an amazing range of possibilities, depending on the selected frequencies and the level and frequency spectrum of the audio signal.

Ignoring for a moment the mechanical issues with my Radial rack, the 1073MPL and the B15 are both superb performers that offer much to the discerning engineer/producer. The 500–series ‘1073’ mic preamp sector is pretty competitive these days, so whether or not you want to buy the 1073MPL will depend on just how closely its performance matches your needs and expectations. It’s certainly up there with the best of them, and I’d strongly suggest that you listen to a 1073MPL before making an alternative choice.

For me, the B15 is in a different situation — I genuinely can’t recall using any EQ that offers so much potential for creatively colouring an audio signal. In fact, I liked it so much that I’m seriously considering buying a BAE 500–series rack so that I can have a B15 or two in the studio for my next project. It’s difficult to put this into words and you’ll really need to audition a B15 to fully appreciate its performance capabilities. I highly recommend that you do — just make sure that you take your current 500–series rack along to check the fit!

BAE have managed to cram a lot of high–quality electronics into these two modules, and they each do their job of colouring the audio that passes through impeccably.