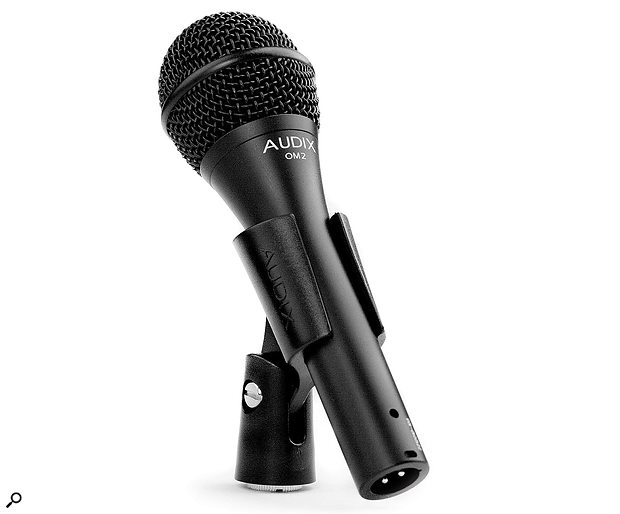 If you’re looking for a new stage mic, it’s worth looking further afield than the usual models — as these classy examples prove!

When you think of vocal stage mics, Audix might not be the first name that springs to mind, but the US–based company have been in the microphone business for 30 years. Their mics are designed, assembled and individually tested at their Oregon factory, and once you register your microphone, you get a full five-year warranty. The mics we are looking at here are all dynamic models in the Audix OM series, intended primarily for professional live use (though they also have numerous studio applications).

There are six mics in the range, designated the OM2, OM3, OM5, OM6, OM7 and OM11, and their price goes up in order of model number. We were provided with one of each of the four higher–numbered models for this review. A common feature of all these microphones is a very light diaphragm structure, enabling the upper frequency response limit to be pushed a little higher than you might expect from a dynamic microphone. A soft pouch and clip come as standard with each mic.

OM Is Where The Heart Is

Tailored for close–up vocal use, the OM5 has a hypercardioid polar pattern to help maximise separation from other sound sources on stage, and also to maintain a high feedback threshold; its off–axis rejection is specified as 30dB. Besides vocals, other suggested uses include sax, brass, guitar, dobro, flute, percussion and drums. It is able to handle SPLs in excess of 144dB, while a low–frequency roll–off below 120Hz helps balance the natural bass boost caused by the proximity effect, and at the same time reduces the effect of low–frequency handling noise or stage vibration.

As with virtually every other live vocal mic, the frequency response is shaped to enhance clarity and projection. In this case there’s a slight hump in the 100 to 200 Hz region to add weight to the voice, with a wide presence ‘plateau’ extending from around 3kHz to 12kHz, adding around 6dB of lift at the highest point. The frequency range of 48Hz to 19kHz is presented without any reference dB levels, but judging by the provided graphs, these are more likely to relate to the –6dB points than the more usual –3dB points. Sensitivity is specified as 2mV/Pa at 1kHz, which is typical for this type of microphone.

Physically the mic has a distinctive flared body shape, and both the zinc body and steel basket are finished in a durable black coating. The basket unscrews and has a foam lining that can be removed for cleaning, while gold–plated XLR pins ensure a good contact. Accessories comprise a soft zip bag and a plastic stand clip complete with EU thread adaptor.

Featuring very similar construction and overall styling to the OM5, the OM6 is again a hypercardioid dynamic vocal microphone that’s also recommended for broadcast, and which, like the OM5, can handle SPLs up to 144dB without distortion. The main difference that I can see is in the capsule tuning, where the low end has that same ‘warmth’ hump between 100 and 200 Hz, but the presence curve shape differs slightly, having two distinct humps, one around 4kHz and one peaking at around 12kHz. The specified overall frequency range is 40Hz to 19kHz, and the sensitivity is slightly lower than that of the OM5, at 1.5mV/Pa at 1kHz. Audix suggest that the OM6’s voicing emulates a “condenser–like” tonal quality. Alternative suggested uses are the same as for the OM5.

Again following the same body styling and general voicing as the previous two models, the OM7 has a slightly less prominent presence lift than the previous two models but otherwise shows similar characteristics to the OM5. Its tight hypercardioid polar response is tailored to provide optimum feedback rejection, and it is said to be more tolerant than most to performers who cup their hands around the mic basket. The sensitivity is deliberately lower than that of the previous models, at 0.8mV/Pa at 1kHz, to provide plenty of headroom — though this places greater demands on the mixer or preamp quality.

The Audix OM11 has a more conventional tapered body shape, though still sports the same all–black finish as the other mics in the range. We’re told that the OM11 was first offered in 1985 (when it was known as the OM1), with its target applications being main and backing vocals as well as studio work. Its hypercardioid capsule offers the same benefits of spill rejection and level before feedback. The maximum SPL is 140dB and the sensitivity a little higher than from the other mics, at 2.3mV/Pa at 1kHz. Its response follows the same general slight ‘smile’ curve as the other models, and its dual–hump presence combines a gentle 3kHz rise with a more pronounced secondary peak up around 12kHz. The overall frequency range is specified as 50Hz to 18kHz, and the design aim is to deliver crisp vocals at high SPLs and with good feedback rejection.

All four mics exhibit low handling noise, and they feel comfortable for handheld use. Their tight hypercardioid pattern gives good feedback rejection yet the mics are not excessively sensitive at the rear, which bodes well for use close to stage monitors. Of course you do have to be careful with tight hypercardioid–pattern mics to keep them ‘on–axis’ when using them, otherwise the level can drop off quite dramatically as you move around the mic.

All four deliver a quality sound that compares well with their contemporaries, though the performance generally tracks the price, and the more expensive models exhibit more of a studio–like ‘airy’ clarity at the high end. However, all four avoid the nasal ‘honkiness’ that some lesser dynamic models seem to suffer from, and the general tonality is fairly similar across the range. The extended high end, resulting from the use of a very light diaphragm assembly, seems to have paid off.

All of the OM-series mics look pretty much identical — except for the top–of–the–range OM11, which has a slightly chunkier body.Though less airy sounding than its more costly companions, the OM5 still stands up very well against similarly priced competition, delivering the necessary clarity and punch for use in a band context. It comes across as well balanced with clean mids and highs that project well, but it doesn’t sound edgy or shrill. The tonal change due to proximity effect is noticeable as you move close to the mic, where the most natural tonal balance seems to be at around two to three inches away from the mouth. There’s also some tendency for popping when using very close to the lips, but then much the same can be said for most similar microphones. Resistance to feedback is impressive.

The OM6 also takes on more low end as you get closer, which is pretty much what you’d expect from any cardioid or hypercardioid vocal mic. Most pop vocalists would use the mic fairly close, so be prepared to use low–cut EQ on the desk to tame excesses. The resistance to popping seems a little more robust with this mic than with the OM5, and the overall sonic character isn’t very different from that of the more expensive OM7, which probably makes it my favourite of the bunch when it comes to performance/cost ratio. Again it exhibits a good resistance to feedback.

The OM7 delivers a plausibly natural vocal balance with good clarity, a clean mid-range and a decent resistance to popping, though if used very close up, some ‘near pop’ events become audible, so a preamp with the low-cut filter switched in would be advisable for typical ‘eat the mic’ vocalists. The sensitivity is a little lower than for the other mics in the series but that’s still not a problem for close–miked sources. When working with lower–level sources it would mean teaming up with a mixer or preamp that can provide adequate clean gain, but I suspect this mic is designed primarily for close or loud singers. Overall, this is a clean performer that does exactly as claimed offering both clarity and resistance to feedback.

With a street price of around twice that of the OM5, the OM11 comes across as well balanced and natural sounding, with more of an airy character than the OM7. Again it can be prone to picking up popping if used very close, but engaging the low cut filter on your mixer or preamp should fix that. If you back off two or three inches from the mic, popping becomes negligible, but of course there’s a drop in level. There’s also a change in the amount of proximity low boost, which is another reason you might want to apply low cut when working really close. Altogether, this is a very nice microphone that sounds more like a studio vocal mic than most live vocal mics manage to achieve. It isn’t cheap for a dynamic mic, but it is built to last and is designed for professional applications where sound quality and reliability are paramount.

Given their build quality and performance, the closest competitors are from companies such as AKG and Shure, though there’s no shortage of competition in the wider marketplace.

All the mics in this series are capable of excellent results, both live and in the studio, combining good ergonomics with solid engineering.