BAE's latest take on the classic Neve 1073 preamp design is presented in a sturdy, portable format. But does it deliver the familiar Neve sound? 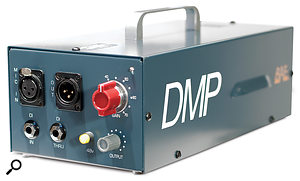 BAE (formerly Brent Averill Enterprises, and now British Audio Engineering) are a Californian company who specialise in manufacturing preamps based very closely on — and, in some cases, that are extremely accurate replicas of — the classic Neve 1073 microphone preamp and related products. I reviewed BAE's 1073 MPF preamp back in SOS April 2010, and the 1073 DMP is another variation on the same basic theme. In fact, it is a 'desktop' — or portable — version of the 1073MP: the 1073MPF without the high-pass filter option, and with an internal power supply.

Basically, we're talking here about an authentic 1073-style mic preamp packaged in a modern, convenient and attractive way, and retaining all the distinctive sonic character of the original 1073 circuitry. The 1073 DMP uses the same Carnhill (St Ives) input and output transformers as were specified for the original Neve 1073 console modules, for example, and the same discrete-transistor BA283 class-A preamp and output-stage circuitry.

However, the actual mic-preamp gain stage employed here is slightly different from the original Neve 1073 module design, since that employed an additional gain stage (the BA284), which did much of the work for the +50 to +80dB end of the gain-range switch. That second gain stage is absent from the 1073 DMP (as it was from the 1073 MPF) and instead the BA283 circuitry's gain structure has been cleverly modified to provide up to +70dB of gain all on its own. The purists might not like the idea, but the approach appears to work perfectly well and BAE have a lot of products out there now employing this revised design, and some very satisfied customers.

The 1073 DMP is a neat 'brick' of a single-channel mic pre. It measures roughly 136 x 115 x 305mm (5.3 x 4 x 11 inches) (WxHxD), including handles and knobs, and it weighs about 3.3kg (7.4lbs). A sturdy metal carrying-handle adorns the top of the battleship-grey painted case, and the rear panel carries the usual IEC mains inlet (with integral voltage selector and fuse holder), plus a mains on-off rocker switch.

Internally, the device is put together well, with a torroidal mains transformer mounted on the back panel, the PSU circuit board affixed to a vertical steel dividing plate, and the audio circuitry arranged in the front half of the case. The chunky output transformer and slightly smaller microphone input transformer are bolted to the case floor on the right-hand side, while the BA283-based circuit board is supported horizontally in an edge connector over the left-hand side. A small Jensen transformer sits next to the DI input socket, while the front panel supports all the connectors and controls.

The front panel is dominated by two black XLR connectors for the mic input and balanced line output. Below these is a trio of (TRS) quarter-inch sockets which accept an instrument input and provide two direct looped-through outputs. The operational controls are trivially simple, comprising a classic red, winged 'Marconi' gain knob, a small grey output level control, and two white rectangular buttons (both with integral warning LEDs) which select output polarity inversion and phantom power. The microphone input gain range is from 15-70 dB, in nominally 5dB increments, and the output level control attenuates the output to zero, with the top half of the range spanning just 6dB for fine level tweaking.

In this version of BAE's 1073 MP product range, the DI input is activated automatically just by plugging something into the front-panel DI input socket. The DI signal is handled by a separate Jensen transformer in a configuration described as the 'Bootsy Collins Mod', and the output passed on to the BA283 circuitry in place of the normal Carnhill microphone transformer's output.

Whereas most 1073-style preamps provide two selectable input impedances, courtesy of alternative input transformer windings, the 1073 DMP only offers the higher option, which is 1200Ω. The DI input, which is essentially the same as a passive DI box, has an input impedance of 150kΩ. 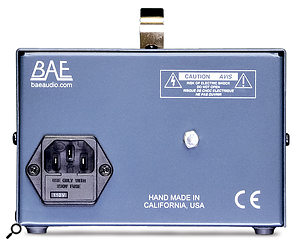 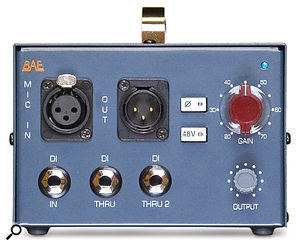 All connections and controls are hosted on the front panel, with only the power inlet on the rear.The 1073 DMP's technical specifications are all very good for this style of product. The maximum gain available on the review model was 71.4dB, and I measured an EIN figure of -120dBu (with a 100Ω source), which is rather better than BAE claim (although I measured it with a normal 20Hz-20kHz bandwidth, rather than the bizarre 300kHz bandwidth of BAE's tests!). The frequency response varied a little with gain, which is not unusual, with the -3dB points being 20Hz and 40kHz for maximum gain, extending out to 8Hz-70kHz at minimum gain. At the higher gain settings, there is a subtle tendency towards a slightly leaner bass response and a brighter high end — as can be seen in the test plots available online.

The THD+N figures are also good, measuring 0.02 percent at maximum gain and when delivering an output level of +24dBu. At minimum gain, delivering the same output level, the THD+N figure dropped an order of magnitude to 0.002 percent. In both cases, the distortion products comprised almost equal amounts of both second- and third-order harmonics. The maximum output level is a very healthy +29dBu.

The DI input appears to be padded down through the Jensen transformer by 25dB, such that the maximum gain available to a DI input is about 46dB. In practical terms, to raise an input level of -30dBu to +14dBu at the output (the kind of level a professional A-D converter might require when tracking), the full 70dB of gain is required. The DI input has a commendably flat response at low gain settings, extending from about 10Hz to well over 80kHz (-3dB points). However, at high gains two trends become evident: the bass roll-off moves up quite significantly (-3dB at 30Hz with maximum gain), and the extreme high end rises steeply towards what appears to be a resonant peak centred at about 100kHz. The THD+N result is very similar to the figures for the microphone input. The 1073 DMP is polarity-correct for both mic and DI inputs unless the phase invert button is pressed.

The first 1073 DMP unit I reviewed was one of the first production units, and I found that it suffered from some very obvious buzzy mains hum during use. This wasn't caused by ground-loop problems (indeed, the DMP sailed through the Windt Hummer test, which reveals potential ground-loop issues), and disappeared if I disconnected the mains cable (the PSU smoothing capacitors maintain the circuitry power rails for a few seconds). On further investigation, I found that the problem was caused by direct magnetic coupling between the torroidal mains transformer and the audio transformers.

On raising this with the company, I discovered that BAE had already identified this issue themselves, and had modified the design to include a 'GOSS' band — which is a multi-layer silicon-steel band enclosing the torroidal transformer around its circumference. The result is a substantial reduction in mains hum, with the 50Hz fundamental reduced by about 10dB, the irritating 150Hz harmonic by 15dB and higher harmonics by 25dB or more. The plots before and after adding the GOSS band can be seen at /sos/mar12/articles/bae_dmpmedia.htm. The improvement is dramatic, and for most rock/pop applications it effectively removes the problem, although critical users working at high gains with delicate sources will probably still find that there is more audible mains hum than there should be. For anyone with an early unit, the GOSS band is an easy retrofit, so I'd suggest contacting BAE for details.

The 1073 DMP has the classic 'larger than life' character that we all associate with the vintage Neve sound. It embodies a combination of sonic traits arising from big transformers and class-A discrete transistorised circuits, and bestows a slightly harmonically enriched bottom end, with a confident, detailed mid-range and a velvety-smooth sheen at the top. It's not the fastest and snappiest preamp around: transients are gently reined in and softened, especially when driven hard — but that, of course, is part of the recognisable Neve heritage sound.

As with the 1073 MPF, the 1073 DMP offers slightly less gain than an original 1073 console module, but there's still more gain on offer than from many modern preamps, and the reconfigured BA283 gain structure doesn't appear to impose any audible compromises. I wonder if the attenuation on the DI input is, perhaps, a little heavy-handed, since I found myself needing to set the gain control well up its range when working with normal (passive) electric guitars and basses. That said, I didn't actually have any difficulty achieving sufficient output level, and noise was never a problem, so it's probably more a perception thing than a genuine concern. The addition of the GOSS band brought a substantial improvement to the background mains hum, but I feel it remains higher than is really acceptable for a product at this price.

Overall, the 1073DMP feels very well made and reliable, and the status of the buttons and gain control are very clear even when viewed from a distance. The output trim control is useful, although I suspect that most will simply turn it fully clockwise and forget it.

The Neve 1073 preamp design remains popular for a very good reason: it has a distinct sound character that is inherently very musical and satisfying. The BAE 1073 DMP delivers that same sound character in a very practical and attractive package that will have wide appeal, and is well worth auditioning if you're in the market for a self-contained, single-channel mic preamp with DI facilities and a classic sound character.

Directly comparable competitors to the 1073 DMP include the Avalon M5, DAV BG9, Focusrite ISA One, Millennia TD1, Phoenix Audio DRS1, Rupert Neve Designs Portico 5017 and Universal Audio Solo 610. These are all great, classy, stand-alone mic pre/DI units, with varying degrees of character. The ISA One and Portico 5017 both have bloodlines that can be traced directly back to the 1073, and both offer a wider range of functions and facilities.

This single-channel, self-contained mic preamp with integral DI facility is based closely on the classic Neve 1073 microphone preamp, and it has all the sound character you could wish for, although there was some low-level mains-hum noise on the review model.