The purpose of Lost Tapes is to provide copyright‑free sample material that sounds very similar to many much‑sampled recordings made in the late 1960s and early 1970s. The product notes talk about moving bass lines, funky horns, slinky guitars and retro keys, and also suggest that Lost Tapes recreates a "period funk and soul sound picture” from an "iconic era in music”. 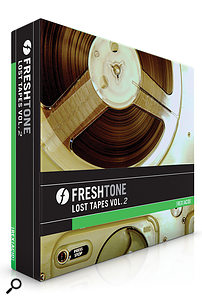 To create the samples, which are formatted as Rex 2 and Acidized WAV files, a team of musicians was kitted out with vintage gear and recorded in London's Gizzard Studio using an Alice Stancoil AM‑series quadraphonic mixer sourced from Manor Studios, and two Studer A80 tape machines. Instruments used include Hammond B3 and Wurlitzer organs and Fender Rhodes electric piano; Hofner Violin and Burns Sonic Basses; plus the usual period guitars.

The 3.52GBs of content is split amongst 10 folders that identify their files as being either jams or loops. The folder titled Full Jams is where the most complete compositions are located, although 'full' refers only to the level of instrumentation, as most files are less than 10-seconds long. There are 150 full jams in total, created by taking 40 unique compositions and cutting them into sections. The Cutdown Jams folder contains the exact same compositions and, despite the folder's title, most are fairly full‑on arrangements, only really lacking things like brass and guitar solos.

Discrete instrument parts for each composition are hived off into the remaining loop folders. These include Raw Drum, Tweaked Drum, Percussion, Bass, Guitar, Keys and Brass, and one called Drum Fills, containing exactly what its title suggests.

Tempos range from 75 to 165 bpm, as indicated by the very first part of the file name. Putting the bpm first also means that the files order themselves according to their bpm — very handy!

When listening to the full jams it is clear that the compositions don't have that big‑studio sound, or the orchestral depth, of classic film themes like Issac Hayes' Shaft or Oliver Nelson's Six Million Dollar Man, but they do display the same kind of frenetic energy, and the arrangements are similarly busy, sometimes sounding like funk and ska studio recordings, other times like jazzy TV themes.

Interestingly, all the solo instrument loops are clear of spill, which is very useful, but perhaps the necessity to capture isolated audio limited the recording methods a little.

Whatever the case, the band, who are very tight, have done a fantastic job of recreating that old‑vinyl recording vibe that has tempted sampling musicians for decades. The drum loops and fills will be of particular interest to many people, but there are also plenty of funky guitar licks, luscious keyboard parts and punchy brass stabs that are well worth having. Anyone who is into sampling, but not litigation, should take a look.