Fender apply their 'suitcase speaker' paradigm to studio monitors — with impressive results, thanks to an unlikely collaboration with Focal.

Fender's original Passport PA system was one of the first integrated 'sound systems in a suitcase', and the line has continued to evolve, with current live‑sound models ranging from 150 to 500 Watts. The latest addition is the Passport Studio and, as the name suggests, Fender have applied the Passport paradigm to studio monitoring. Before you ask what Fender knows about building studio monitors, may I draw your attention to that little Focal logo on the front panel. Focal make highly respected studio monitors, so to discover them collaborating on a Fender studio monitor certainly raises the curiosity level by a degree or two!

This two‑way system uses Focal's own drivers in a pair of moulded plastic enclosures, which are designed to clip together, face‑to‑face, for driver protection during transit. All the electronic circuitry is located in one speaker, with the included two‑metre TRS-jack speaker cable linking to the second. Care must be taken not to use a TS 'guitar cable' for this purpose, as that will short the output of one of the two power amplifiers, causing its protection circuitry to kick in.

A removable hatch cover at the rear of each cabinet, neatly attached by magnets, allows access to the main connectors and, on the powered unit, to a mains‑voltage selector switch. There's room to stow the TRS cable and maybe a mains cable in the back of the second cabinet. Do check that the mains‑voltage switch setting is correct for your local supply before powering up though, as the review system was preset for 110V operation (and so marked on the box), so had to be switched over to 230V before applying UK power.

The inputs are on balanced quarter‑inch jacks, and the volume control, dual‑colour power/clip LED and a pair of three‑way HF/LF tweak toggle switches are to be found at the bottom of the main speaker's front panel, allowing the monitoring level to be adjusted without the need for a separate monitor controller. Also on the front panel are two mini-jacks, one acting as an aux input for connecting MP3 players and the like, and the other to provide a headphone feed. The speakers automatically 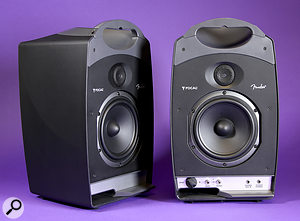 mute when headphones are plugged in.

Protected by a metal mesh grille and located in a shallow, elliptical waveguide, the tweeter is an inverted alloy‑dome type, one inch in diameter. This sits above the five‑inch polyglass‑cone woofer, while a shallow slot at the bottom-left of the cabinet acts as a reflex port. The overall dimensions of the two cabs when stowed (where shaped plates latch into the speaker ports of the opposite speaker)is 457 x 356 x 210 mm. The two handles at the top of the cabinet are then linked using a rubberised handle grip that slots beneath the handles. At 8.5kg in total, the package is certainly easy to transport with one hand.

We are informed by the slender handbook that the frequency response is 50Hz to 20kHz ±3dB, and that the maximum SPL is 105dB peak at one metre. We're also told that the woofers are powered by 50W of Class‑D amplifier power per channel, and the tweeters by 25W per channel. The THD-plus-noise ratio is quoted as better than 90dB. As ever, though, the real proof is in the listening test — though the manual does suggest that running in the speakers for several hours may improve the sound as the driver suspensions will loosen up a little.

Initial impressions on listening to the Passport Studio system were, firstly, that the low end sounded less strained than on most five‑inch systems, presumably because of the larger-than-typical enclosure and, secondly, that the highs sounded very smooth. I ended up setting the bass switch flat and the treble switch in its 'lift' position to get a sound that worked well in my room, and though you don't get the depth of bass that comes with a larger monitor, there's still enough weight to make value judgements. Overall, the tonal balance felt right, with a nice wide stereo image, and while the mids didn't seem quite as well separated or the transients quite so snappy as on Focal's upmarket monitors, I felt the Passport Studios sounded surprisingly mature for such compact monitors, and they definitely have a Focal flavour about them. I could certainly mix on these speakers for long periods of time without discomfort, and be fairly confident that the mixes would translate well to the outside world.

I left the speakers to play for a few hours to see if I could hear any difference, but if there was one it was pretty subtle — perhaps more time is needed to really make a difference? Importantly, though, good mixes sound really good, while rough old recordings really sound like rough old recordings. A good monitor always tells it like it is and these do a pretty good job on that score. It is possible these speakers might have sounded better in a wooden enclosure, as even well‑designed plastic cases tend to exhibit more pronounced resonances than well‑braced wood or MDF, but this format's main advantage is clearly in providing a mobile solution. Certainly those lightweight plastic cases are great for portable use, such as taking your own reference monitors to different studios or to mobile recording sessions, where the Passport packaging system takes all the risk out of transporting your monitors without flight cases.

Focal's driver expertise has certainly helped Fender achieve a very creditable level of performance from these speakers. Although the price puts them into competition with a number of well‑specified, more conventional wooden‑box monitors, don't dismiss these because of their plastic casework — they are serious little monitors and deserve to be treated as such, and have real advantages if you need something you can take around with you.

I can't think of any portable alternatives that offer such an elegant solution though there's no shortage of conventional monitors in the same price range, many of which also work extremely well.

Though some small compromises may have been made for the sake of portability, the Passport Studio is a great solution if you need a pair of go‑anywhere monitors.