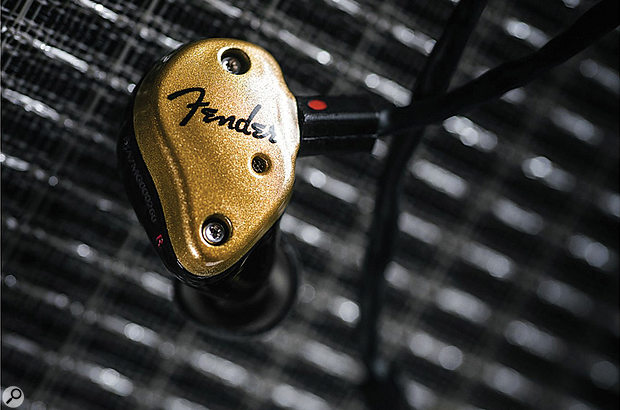 Fender’s foray into the world of pro live sound continues, with these premium IEMs.

At the NAMM January 2016 show, amidst the usual unveiling of celebrity-endorsed Stratocasters, Bigsby-equipped Jazzmasters and Deluxe Tweed amplifiers tweaked to The Edge’s exact specifications, Fender surprised the audio world by announcing their new range of in-ear monitors. For the world’s largest guitar manufacturer to take such a step shows the market for such devices has reached a critical mass, as evidenced by the large number of pro and semi-pro musicians who have jettisoned their backline amps in favour of IEMs.

Fender’s pro in-ear monitor range offers five models: in ascending price order, the DXA1, FXA2, FXA5, FXA6 and FXA7, the latter of which we’ll examine here. Hand-assembled in Nashville, these IEMs are based on designs originated by Aurisonics, a small US company with an enviable reputation in audiophile circles. In a move hailed by Aurisonics founder Dale Lott as “the right marriage, authentic to both our brands”, Fender have acquired the company, enabling their new versions of Mr Lott’s creations to reach a truly global marketplace.

Unless you’re a bat or have had your ears surgically altered to detect subsonic sound, the 6Hz-24kHz frequency response rating of Fender’s top-of-the-range FXA7 Pro in-ear monitors goes well beyond anything required for normal listening purposes. Inside the ear-shaped shell nestles a pair of tweeters, a 9.25mm rare-earth driver and a bass port — the makers say this combination eliminates the need for a crossover, thus improving audio fidelity. Though not intended to produce an excessively loud, ear-shredding listening experience, the FXA7 is capable of delivering 110dB for 1mW, thus providing the necessary headroom to avoid distortion and maintain clarity at lower sound levels.

In-ear monitors have considerable advantages over traditional headphones: they port audio directly into the ear canal, shut out ambient sound, and, unlike cheap earpods, they don’t leak annoying high-pitched noise to the outside world. This means you can wear them on a train without disturbing those sitting next to you, while simultaneously filtering out the clamour of fellow passengers shouting down their mobiles in the Quiet Carriage.

The most efficient (and most expensive) type of IEM uses custom earphone inserts created from moulds of the user’s ear canals: though it produces a great audio response, the ensuing tight fit has the disadvantage of rendering the wearer deaf to all but the loudest room sound, which can be frustrating at soundchecks. An alternative approach, as used in the Fender range, was to scan thousands of different ears, determine their optimal average shape, then use 3D printing to replicate the precise details of its subtle curves and hollows on the earpiece’s housing. In a further effort to create a universal fit, FXA7s ship with different sizes of removable, thin rubbery ear tips to suit various ear-canal diameters. As a result, Fender claim that they will fit 95 percent of ears like a custom-moulded monitor.

Having found an ear-tip size compatible with my capacious auditory orifices, I listened to mixes of my songs I’ve heard countless times on a variety of systems and headphones. I was pleased to find nothing was lacking: the bass response of the FXA7s is impressively big, warm and enveloping, the upper frequencies are clear and sharp, and the stereo imaging is fine. My vocalist partner also praised their clean, unbiased, full-range frequency response. Compared to my regular headphones, I could hear a distinct uplift in the 5kHz ‘presence’ region — while that helps avoid muddiness and enhances overall definition in a studio or leisure listening environment, it could be a drawback when applied to thrashing drum kit and guitars in a stage show, as prolonged exposure to such frequencies tends to strain the ears.

The earpieces’ shortish removable cable (sensibly colour-coded for left and right) is designed for use with a beltpack or nearby mixer — to connect it to a remote unit, you’ll need to buy a headphone extension lead. The upper six centimetres of cable are encased in thin flexible plastic which bends back over the ear to provide a secure fit when in use — even if you indulge in vigorous Stevie Wonder-style head-shaking when performing, I doubt these in-ears will fall off. My vocalist partner found them reasonably comfortable to wear when moving about, and opined that they were stable enough to stay in place during a bout of heavy metal headbanging (not that she usually goes in for that kind of thing). Like myself, she found them fiddly to put on at the first attempt, but began to get the knack after a few tries.

Robustly made with a superior build quality, the FXA7s ship in a posh plastic presentation case which could double as a weird David Cronenberg-style mantelpiece ornament. Also included is a small velvet bag containing three spare pairs of ear tips and a pair of earplugs, and a zip-up leatherette pouch containing a cleaning tool and a stereo quarter-inch to mini-jack adaptor. If all that’s not enough, the pouch’s snazzy red plectrum-shaped zip puller will emphasise your rock & roll credentials. No volume control, limiter, amplifier, transmitter or receiver is included.

Available in gold or metallic black, these high-end in-ears provide a quality listening experience on a par with professional headphones. Apart from the relatively high price, the only potential downside is that if you’re one of the five percent of users who can’t achieve a tight seal, small movements of the IEM within the ear will tend to affect the amount of bass you hear — however, unless you go down the more expensive ear-mould route, the same caveat applies to all makes of in-ear monitors.

Though you should always take care to protect your hearing by keeping your IEM levels within sensible limits, this style of monitoring could signal the end for the over-the-top stage volume which historically has ruined the mix at so many rock gigs. In fact, if the trend continues, the Tinnitus Helpline may find itself going out of business — I called it recently, and it just rang and rang...

The popular Shure SE range of isolating earphones sits in the same price range as Fender’s FX series — the nearest equivalent to Fender’s FXA7 is the Shure SE535.

The cream of the crop of Fender’s pro in-ear monitor range, the FXA7 provides a good full-range listening experience for a comprehensive range of ear cavity sizes.