Step On It! By Paul White 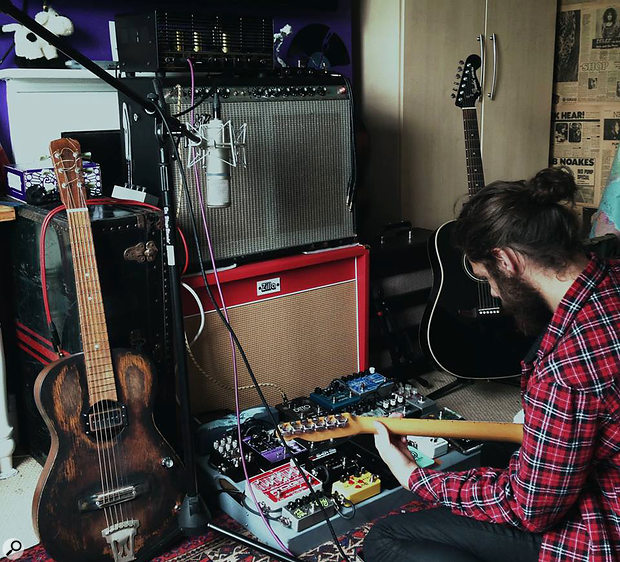 Guitar-synth stompboxes open up a world of sonic possibilities — but getting the most out of them takes a little forward planning...

While there’s no great mystery in hooking up the majority of guitar stompboxes, things get a bit more murky when dealing with those pedals, such as the Boss SY-300 or one of the EHX 9 series, that behave more like synthesizers than effects. All these synth-like pedals use the standard output from an electric guitar as the raw signal source, so there’s no requirement for a special hexaphonic pickup. There’s also the Future Impact 1 Bass Synth, which uses a mixture of processed guitar signal and pitch tracking. While studio use doesn’t throw up any particular problems, using any of these pedals live requires a bit more thought.

All synth pedals sound best when fed into a full-range amplifier, and pedals that also have stereo outputs obviously sound best fed through a stereo system. Clearly just leaving them in-line between your guitar and guitar amp, as you would with a ‘normal’ effects pedal, isn’t the best option, as guitar amps don’t have a wide, flat frequency response, most are mono, and if you like to push your amplifier into distortion, they won’t sound clean enough either.

Perhaps the best way to explore some of the practicalities is to take a closer look at my own live pedalboard setup and the reasoning behind it. In addition to the familiar guitar effects, this includes an EHX B9 organ emulation pedal, and addresses most of the challenges you are likely to come across with such devices.

Most synth-like guitar pedals can only sustain notes for as long as the guitar is outputting a healthy signal, so if your synth pedal doesn’t have a ‘Hold’ switch input or ‘Freeze’ mode, you can expect notes to last for maybe 10 seconds before they start to die away, with the lower notes usually sustaining the longest. A compressor pedal will help extend the sustain time, however, as well as even out level changes.

I have an SY-300 (used mainly in the studio), which usefully includes a compressor stage at its input, but the EHX B9, and indeed any of the other EHX synth-like pedals, benefit quite dramatically from having a separate compressor pedal before them to even out the level of the synthesised sound and to maximise sustain.

Paul White’s pedalboard has been specifically set up for running synth pedals and traditional effects in parallel. The Hot Mushroom compressor presents the B9 organ pedal with a hot, even signal; the EHX Superego allows him to perform organ drones while playing guitar over the top; and the Mini Vent treats the organ pedal’s output to a traditional-sounding Leslie emulation.

The compressor doesn’t need to be anything fancy, but low noise is an advantage. One of the current crop of affordable mini compressors will do fine and won’t take up too much board space. It doesn’t matter if it is in an awkward position or even underneath the board, as it can be left on all the time.

There’s no Hold option on the EHX 9-series pedals, but I get around that by placing an EHX Superego pedal directly before the B9. This pedal includes a Freeze function that turns guitar sounds into a sustaining note or chord and, used before the B9 pedal, allows sounds to sustain indefinitely under control of a footswitch that can be set to latching or momentary opertion. Note that EHX also make a cheaper Freeze pedal, but that turned out to be less suitable as it can’t be set to deliver a wet-only output, which becomes an issue when you want to play conventional guitar over the top of a held organ chord without also playing more organ notes.

For keeping my guitar and synth sounds separate, both the EHX and Boss SY-300 pedals provide the option of separate wet and dry outputs — but you might like to consider other routing options, as any ‘dry’ signal coming out of the pedal will be affected if you put a separate compressor pedal before it. In practical terms this means splitting the signal before it gets to the compressor, though the SY-300 does offer a number of internal routing options that can be put to good use to simplify your setup.

You may also want to add further effects to the synth sound before it reaches the amplifier. For example, a tonewheel organ emulation only really comes to life if it goes through a rotary speaker cabinet — or more practically a very good emulation of one — that can be switched between fast and slow speeds as you play. To provide this function my board also includes the excellent Neo Mini Vent, which takes a mono input and generates a stereo emulated Leslie speaker output. Other companies, including EHX, Boss and Strymon, make rotary speaker emulation pedals that would work fine in this context. In my case the output from the rotary speaker emulator usually goes directly to the PA, but it works equally well into a stereo keyboard amp or a couple of small powered PA speakers.

During live performance the chances are that you’ll want to bring in the synth only at strategic points, and ideally you’ll also want full control over its level. My solution was to add a mono volume pedal between the B9 and the Mini Vent rotary speaker emulator, but if you’re doing the same with an SY-300, you can either rig up an external expression pedal to control it or simply put the output through a stereo volume pedal. 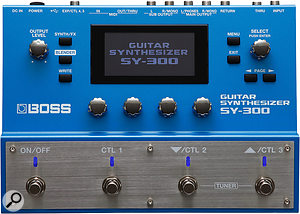 The Boss SY-300 features a built-in compressor, to ensure that the synth processing always has a healthy signal to work with.

So, you can see that integrating a B9 pedal into my system resulted in a considerable expansion in pedalboard real estate. The chain servicing the organ part of the sound now comprises compressor, Superego pedal, the B9 itself, a volume pedal and then a mono-to-stereo Leslie emulation — connected in that order. As an alternative, a stereo volume pedal could have been put after the Leslie emulation, which would have reduced any background noise when the organ sound was not needed — but I don’t have one. If you don’t need to Hold/Freeze synth sounds or if your synth includes a hold function, then you could lose the Superego pedal.

The chain would be simpler if using a Boss SY-300, as that includes pretty much all the functions you need, including compression and effects — so all you’d have to add is an external expression pedal to control the volume. However, there’s still the question of how best to manage the inputs where you have two chains of pedals, one for the guitar and one for the synth sounds.

Hot Signals In Your Area

All the synth-like pedals I’ve come across that work using a conventional guitar input work best when fed from a full-volume guitar signal — and in the case of the EHX pedals, they recommend using the bridge pickup as it has the strongest harmonic content. This is fine if you play full volume on the bridge pickup all the time, but that’s unlikely to be the case!

In order to have my more conventional pedals acting on only the guitar sound, the input to my pedalboard is split two ways, with one leg feeding the regular guitar pedals (tuner, overdrive and delay) and the other feeding the compressor at the start of the B9 chain. A simple Y-lead would do the job, but if you use your guitar’s volume control during performance, as many guitarists do, the synth pedal won’t always be receiving a full-strength input — which affects both level and sustain. And you probably want to use pickups other than the bridge pickup, which can take some of the edge out of the synth sound. This is where I left the realms of simple ‘pedalboard trickery’ and got out my soldering iron to modify my guitar for a second ‘pre-volume-control’ output, as explained in the ‘Guitar Mod’ box.

The advantage of my guitar mod combined with split routing is that the B9 always receives a full-strength, bridge-pickup output regardless of the guitar’s volume control or pickup selector settings, so I can turn the guitar volume right down and play only the B9 if I want to. Splitting the signal right at the start also avoids any pedals connected before the B9 (compressor and Superego) affecting the guitar sound.

Naturally a variation on this setup would work for any guitar pedal that produces a synth-like sound using a standard guitar input, including the rest of the EHX 9-series range, the company’s various Hogs and Pogs, the Future Impact 1 and the Boss SY-300 guitar synth. The EHX Mel 9, B9 and C9 in particular benefit from heavy compression at the input as Mellotrons and organs are not velocity sensitive, so the more even input level you can get, the more convincing the emulation.

Don’t let this apparent complexity put you off any of these synth-like pedals, however — with a bit of preparation, the results are definitely worth it! 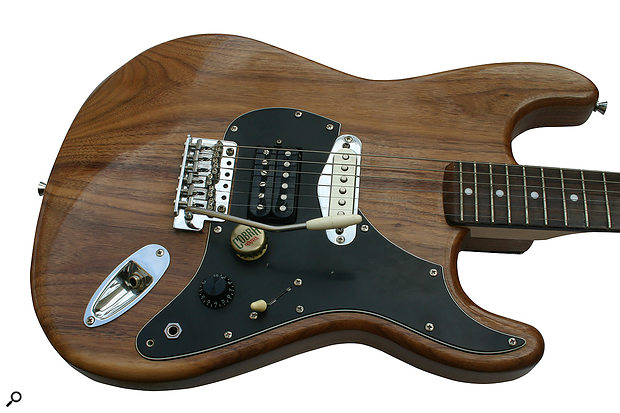 Here, the second tone control has been removed, and replaced with a jack that connects straight to the bridge pickup. This allows a full-volume signal to be sent to any synth pedals, while the ‘normal’ output can still be controlled with the pickup selector switch, volume control, and the remaining tone knob.

I have a few self-assembled Strat-alike guitars that I use live, and I’ve modded three of them by removing the lower tone control and then wiring the remaining tone pot as an overall tone control. A jack socket then goes into the hole vacated by the lower tone pot and is wired directly to the output of the bridge pickup, so bypassing the guitar’s pickup selector and volume control. This output is used to feed the synth chain. It’s a simple mod and can easily be reversed if you come to sell the guitar.

By using a double guitar lead (with one straight and one right-angled jack at the guitar end), I use the normal guitar output to feed my overdrive and delay pedal chain, starting with the tuner, and the other (bridge pickup) output to feed the compressor at the start of the B9 chain. It pays to keep the two guitar cables as short as possible and to choose low capacitance cables, otherwise having two cables hanging off your guitar might see you losing a bit of top end.

If you happen to have a guitar with separate magnetic and piezo outputs, such as some of the Parker Fly models, it would be worth experimenting by feeding the synth chain from the piezo output and leaving that set to full volume.