Are delays suffocating your vocal parts? Cubase has the answers!

In pretty much any song-based production, the vocals take centre stage, and while a well-recorded killer vocal performance is a great start you can often enhance it. Reverb and delay treatments, or a combination of both, can be part of that, but reverb often seems to move sounds ‘back’ in a busy mix, and in many contemporary styles, especially pop and EDM, the vocals need to remain up front if they’re to stand a chance of competing with everything else. Judicious use of delays can help you here, so let’s consider how you might best use Cubase’s bundled delays to add a little space and spice to your vocals, while keeping everything up front and personal.

The Cubase range features a number of delay plug-ins: MonoDelay (included in all Cubase variants); PingPongDelay (in Cubase Elements and upwards); StereoDelay (Cubase Artist and Pro only); and ModMachine (Cubase Pro only). They all have their uses. The last three are more obviously of a ‘creative’ variety, but even if you only have MonoDelay a few easy workarounds will have you teasing out some lovely creative effects.

In a busy mix, a generic wash of spatial processing on a lead vocal adds to the wall of sound, and can make the mix as a whole feel muddled. This is where the classic ‘ducked delay’ treatment comes in: instead of applying a delay to the whole vocal, a ducked delay only makes its presence felt where there’s the ‘sonic space’ for it to do so — for instance, in the gaps at the end of one vocal phrase before the next phrase begins. During these gaps, the listener can hear the delay effect clearly, but the level of the delay is suppressed during the singing, so as not to obscure the all-important vocal part.

StereoDelay, with the send automated to add delay only at the ends of phrases. Different delay timings are used on the hard-panned left and right channels to enhance the stereo effect.

If you’re using Cubase Artist or Pro, MonoDelay features a side-chain input that can create this ducked delay effect automatically. First, create an FX Channel and insert MonoDelay on it. Dial in some suitable settings (for starters, try a quarter-note sync’ed delay) and switch on its side-chain input, which glows orange when enabled. Now, on your lead vocal track, set up two sends (post-fader, which is the defult). The first sends the vocal to the MonoDelay effects bus — if you just enable this, you’ll simply get a delay across your whole vocal. Then add a second send from the lead vocal, this time to MonoDelay’s side-chain input. The delay will now only kick in during pauses in the lead vocal part; all you’ll hear is a delay effect applied to just the end portion of each vocal phrase.

If you’re lucky, this can sound pretty cool. Why luck? Well, more often than not, you can generally get more musical ducked-delay results via a DIY approach that uses automation data and is very easy to setup, albeit somewhat time-consuming to execute. As above, create your FX Channel with MonoDelay and enable a send from your lead vocal channel. Don’t engage the side-channel input this time but instead add an automation lane on your lead vocal track that points at the send level to the delay plug-in. All you need to do is create automation data that increases the send level to the delay at the end of each vocal phrase where you want the delay effect applied. This is more laborious, of course, but I often find I can achieve this more efficiently by draw the send envelope for my first ‘spot’ of delay and copying and pasting that data to the other spots where I want the effect applied. The upside is that you get much more precise control over the effect.

If your version of Cubase lacks StereoDelay you can use two instances of MonoDelay instead.

Delay Out The Way

As a lead vocal is usually panned to the centre of the stereo image, a further way to ensure that the delay doesn’t step on the toes of the vocal is to pan the repeats. Artist and Pro users can simply replace MonoDelay with StereoDelay in the arrangement described above to explore this and, as shown in the screenshot, you can use StereoDelay’s pan controls to send the left/right delay lines as far to the edges as you wish. It’s a good idea to apply different delay times to each side, to separate the left/right repeats somewhat and create a nice stereo effect for the listener. If you don’t make the left and right sides different they’ll simply combine to form a phantom centre image, which rather defeats the point of using a stereo delay! 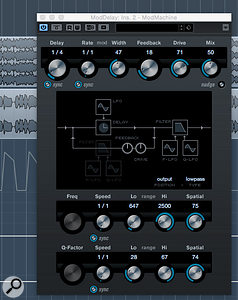 ModMachine can add some interesting filter and distortion options to the delay effect.If you don’t have StereoDelay you can use this trick with MonoDelay. First, create an FX Channel with MonoDelay inserted. Duplicate this so you have two identical MonoDelay FX Channels. Route a send from your lead vocal track to the first FX Channel, and another to the second. If you’re building on the ducked delay example, open a further automation lane for your vocal track, set the second FX send level as its target and copy any send automation data you created for the first MonoDelay and paste it here. In the MixConsole, opposite-pan the two FX Channels containing MonoDelays, putting one hard left and the other hard right. Finally, tweak the settings of the two MonoDelay plug-ins to ensure the left and right delays have different characteristics so that you get a true stereo effect.

In all the earlier screenshots, I’ve used the filter options in the delay plug-ins to roll off both high and low frequencies in the delay sound. This can sound quite cool but it also helps in keeping the delay ‘further back’ in the mix — out of the lead vocal’s way, without pulling the lead vocal itself back with it. But EQ’ing the delay in this way is not the only way you can add sonic spice, and ModMachine provides more such options. Although ostensibly a delay plug-in, it also provides filter, drive and modulation options that can be varied using its LFO (via the Rate Mod setting). For example, the Width control sets the amount of modulation applied to the delay and can take you from a vibrato through to a chorus, while the Drive controls adds distortion to the feedback loop. If you apply lots of feedback (lots of repeats) then they’ll gradually get more distorted over time, which can sound great.

While ModMachine makes this sort of thing easy, you can, again, achieve similar effects using MonoDelay by inserting some additional plug-ins on the FX Channels before or after MonoDelay itself. For example, if you’re limited to using MonoDelay, adding an instance of AutoPan can get your delays moving across the stereo image, without having to use two delay sends. 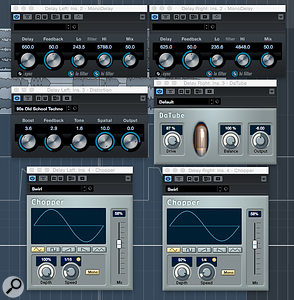 MonoDelay can be combined with other stock Cubase distortion or modulations plug-ins to achieve similar results to some (but not all) ModMachine patches.If you want to get a little closer to what ModMachine delivers, a combination of a distortion plug-in and a modulation plug-in make a good starting point. In the screenshot below, I’ve gone back to basics with a combination of Distortion (left), DaTube (right) and Chopper (left and right), all of which are included from at least Elements upwards. The contrasting distortion plug-ins on the left/right MonoDelay channels added some extra spatial interest, and I also applied different settings to the two Chopper instances, both of which were used to create a sort of vibrato sound on the delay lines.

There are some limitations when working in this way — there’s no way to insert plug-ins into a delay plug-in’s feedback loop, and the internal routing in Cubase seems to prevent a workaround — but there are probably more creative options to explore here than you’ll ever need. Just to illustrate the key ideas I’ve explored here, there are some example audio files on the SOS web site for you to check out (http://sosm.ag/dec16media). So next time you’re presented with a great vocal recording, why not experiment with delay to make it even better?