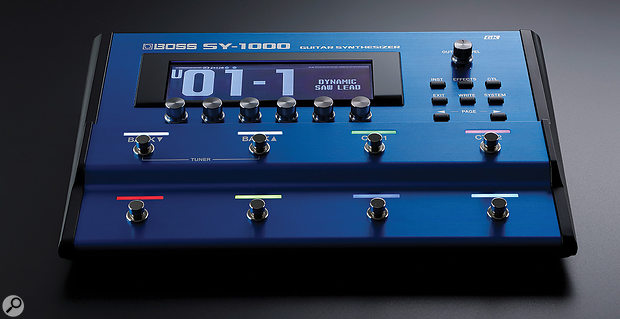 With its impressively fast tracking system and analogue synth-like sounds, this is a guitar synth with which guitarists can finally feel at ease.

Many seem to think guitar synths too complicated, too slow or too unreliable, but Boss's new SY‑1000 might just change that: not only does it offer more analogue synth-like sounds than their previous devices, but it also responds really well to your playing — and it doubles up as a good effects processor to boot. You can clearly see aspects of this pedal that have evolved from Roland's COSM guitar modelling, Boss's SY‑300-style 'normal guitar' synthesis, and their GT‑1000 effects processor, but there's also a new GK-driven synth engine here. It's based on custom 48kHz/32-bit DSP circuitry that we're told is six times more powerful than what's used in the SY‑300. While it's undoubtedly the exceptionally fast and reliable tracking of the new hex-pickup-driven Oscillator synthesizer that sets this instrument apart from its predecessors, the sounds themselves are a big improvement on the mostly sample-based offerings of previous Roland guitar synths. Everything is much more like an analogue synth — for example, when editing the sounds you'll find all the familiar analogue waveforms and resonant filter options at your disposal.

The SY‑1000's top panel sports eight assignable footswitches, and above these a large LCD is joined by a modest number of buttons for patch navigation, page selection and editing, and six turn-and-press encoder knobs. The encoders, arranged beneath the screen, access the adjacent on-screen parameter, and there's also a master output level control in the top right-hand corner. By default, the footswitches select four patches, step up or down through banks, and provide two control assignments (for things such as switching rotary speaker speed, part muting, hold, and pitch gliding), but they can be reassigned to other functions. Each footswitch has an LED bar indicator that changes colour according to the selected function. There's also a Manual switching mode, providing fast on/off switching for the individual voices that make up a patch.

On the rear are stereo Main and assignable stereo Sub outputs, an Effects Loop, and five-pin MIDI I/O DIN sockets. A USB socket provides a connection for the Mac/Windows software editor, allows the SY‑1000 to act as a direct recording/MIDI interface, and caters for firmware updates (I updated to v1.03 for this review). There are also two dual control inputs (TRS jacks), allowing up to four controllers or switches to be connected. A TS jack input caters for conventional guitars/basses, and there's a 13-pin input for GK pickups. (If you use a GK pickup, set its selector switch to its mid position to send both the Hex pickup and the regular guitar sound to the SY‑1000 via the 13-pin cable.) Global settings allow the output to be EQ'd to suit different types of amplifier, including guitar or bass combos and PA systems, but for the best results a full-range, flat-response keyboard- or PA-speaker is recommended. While the Main and Sub outputs are normally used for stereo signals, they can be reconfigured as four discrete mono outputs, with independent EQ on each.

There's extensive connectivity on the rear panel, and the analogue outputs can be configured in various ways, and with EQ applied to suit different speakers.

You can tailor the SY‑1000 to the instrument you're playing. This entails entering measurements relating to the instrument's scale length and the GK pickup placement relative to the guitar bridge, and selecting between guitar and bass as the input source. A Sensitivity setting also allows for balancing the string levels and sensitivity, though this only needs to be done once, unless you change guitars or reposition your GK pickup. Happily, my Roland-ready Strat worked fine with the default settings. If you have more than one GK-compatible guitar you can save up to 10 pickup settings. A built-in tuner mutes the audio output when tuning, and it's possible to offset the tuning if you want to work at pitches other than A=440Hz.

The settings are organised as Patches, each comprising up to three separate 'Instruments' plus the 'Normal' guitar sound, which are mixed together to create the final Patch sound. Various sound sources are available for each Instrument, and in GK mode (which requires a GK-compatible guitar) you can access them all: a modelled guitar sound (E.Guitar, E.Bass, Acoustic and VIO Guitar), Poly FX, Dynamic Synth, the GR‑300 emulation, and the new Oscillator synth. In Normal mode (processing the sound from your guitar's conventional pickups), you can access the modelled amps, cabs and effects, as well as the Dynamic Synth. All of a Patch's Instruments can be routed through separate effects before mixing, and they can be adjusted independently for pitch and level. For GK patches, you can also pan each individual string or set up the guitar equivalent of keyboard splits — useful, for example, for putting the bass notes on the bottom couple of strings and a pad sound on the top four.

Up to 200 Patches can be saved in 50 banks of four. You get 50 banks of factory presets too, which can't be overwritten but can be modified and saved to user slots. To speed up patch creation, you can save Instrument and effect setups in 'Variation' libraries, which allow elements from one patch to be used in another. Presets are divided into Normal and GK variants — most factory presets are GK ones, and will only respond if a GK or compatible 13-pin pickup system is detected, but the last 12 are Normal. The more common alternate guitar tunings are also available as presets: Open D, E, G or A, Drop D to A, D-Modal, Nashville and a 12-string emulation. And if those aren't enough, you can also create your own tunings, which can be used on guitar or synth sounds.

Editing is possible via the hardware. The top-panel controls are fairly straightforward to navigate, the large monochrome LCD display is helpful in showing both graphics and numerical data, and there's a page that shows the routing of all the sound sources and effects. 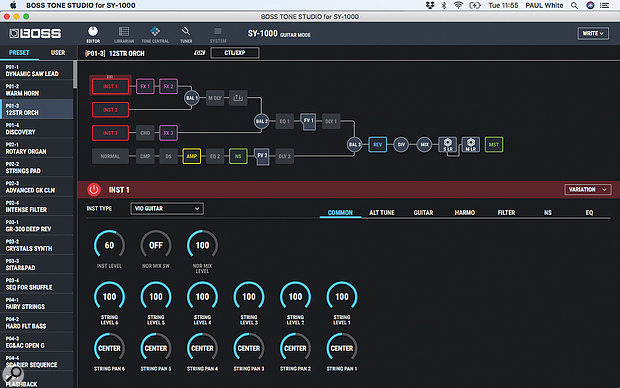 While patch creation and editing is possible on the hardware, the free software editor makes it really intuitive to configure even the most complex patch, with clear diagrams of the signal path and much of the work possible via drag and drop.

But editing is far easier using the free Boss Tone Studio editor software, which also allows access to new patches via the online Boss Tone Central resource. With the software, I found that a good general starting point was to find a preset close to what I wanted, then edit it, and save it to one of the user slots. Clicking on an Instrument gets you to the editing pages for that Instrument. Here, you can select the Instrument type, waveform, LFO control, sequencer and envelope parameters for adjustment. Processing blocks are moved by drag-and-drop and, alongside the usual reverbs, delays, chorus, EQ and noise gates, three special effects blocks provide access to a wide range of effects, including some less mainstream effects, such as Slow Gear and De-fretter. The effects loop can be moved to different points in the signal path.