The Dynamic Synth — the only synth type that can be used in Normal mode — sounds much the same as the SY‑300 in that while it's capable of a range of synth-like sounds, most still retain a guitar-like quality because the decay envelope follows the guitar sound. There's no portamento option, but the Dynamic Synth still offers a choice of basic analogue-style waveforms, and it includes two 16-part step sequencers that can control pitch, filter and amplitude. This voice works well for creating pad sounds and guitar-friendly lead and bass lines, and it's a good bonus feature — but if you don't have (or intend to acquire) a guitar with a GK pickup, the more affordable SY‑300 might be a better bet.

Of more interest to anyone considering buying an SY‑1000 will be the Oscillator synth, which has more flexible envelope control and produces a 'purer' sound. Each string drives its own multi-waveform oscillator, making polyphonic synthesis possible, and there's a choice of filter types, portamento, modulation and comprehensive envelope control. Using the ring modulator it's possible to create some FM-like tones, while further sophistication is available via the oscillator sync option (Oscillator 2 is reset by Oscillator 1), which makes for beautifully aggressive lead sounds. 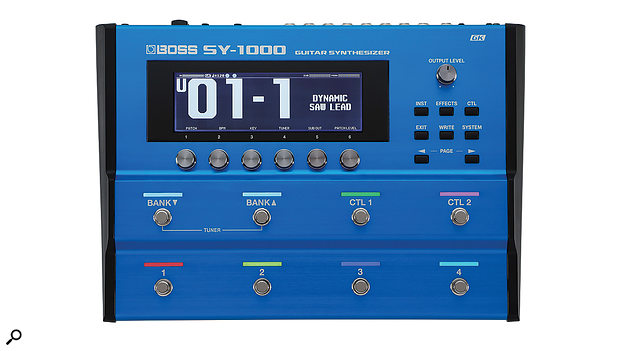 Amongst the various top-panel controls are eight assignable footswitches and six rotary/button encoders that are used to tweak the parameter currently displayed on the screen above.

A feature from my old GR-500 (the first 'playable' guitar synth — we're going back to the 1970s here!) that I've often missed on newer devices is the ability to connect a monophonic synth and have it follow the last note you played, while previously picked chord notes continue via the polysynth section. It really brings arpeggiated chords to life, and if you add delayed vibrato or assign a pedal to control vibrato depth, the resulting sound is huge! With the SY‑1000's Oscillator synth you can recreate that effect by setting one or more of them to monophonic, and if you add just a hint of portamento, you find yourself right back in the land of Prog excess. There are two portamento modes, the first starting at the last pitch played on a per-string basis and the other starting at the last pitch regardless of string.

If you've not yet encountered COSM guitar and amp modelling, you may be surprised at just how effective it can be. It can emulate different pickup types (including P90s, Fender-type single coils and humbuckers) for the electric guitar models. Most guitar voices' names are self-explanatory, but the VIO Guitar's purpose is less obvious — it alters the input signal's envelope and harmonic characteristics to create a bowed character. The acoustic modelling may not be the equal of a well-miked real acoustic guitar, but it's close enough to get you through a gig and could also work well for less-exposed parts in the studio. Both steel and nylon stringed instruments can be conjured up and, courtesy of the split pickup, the 12-string setting can emulate the correct tuning (unison on the top two strings and octaves on the other four).

In all modes, the SY‑1000 responds much more positively than anything I've tried to date, and that will be hugely important for many guitarists.

The Poly FX option is used for applying polyphonic 'per-string' processing to the guitar sound, to create a range of effects but most notably 'clean' hex distortion, which doesn't suffer from the intermodulation usually heard when playing chords through a regular distortion device. Having owned a GR-300 back in the day, I can also confirm that the GR-300 emulation gets very close to the real thing. The quality of the effects processing, which is based on the algorithms used in the GT-1000, is generally impressive too.

The SY‑1000's analogue-style sound generation means you can't call up pianos or other 'photo accurate' instrument emulations, but it compensates for that with solid guitar-to-MIDI and bass-to-MIDI performance, which can be used to drive external or virtual instruments (which should be multitimbral and set to Mono for independent string bending; poly mode is fine for chromatic parts.)

A guitar synth is never going to be a direct replacement for a keyboard polysynth when playing complex parts — guitar chords tend to be voiced differently, so compositions sound less obviously 'keyboard-ish'. But the SY‑1000 does come closer to delivering the same sort of sounds. Lead lines are easier to manage — in fact, the guitarist's ability to apply finger vibrato allows them to add feeling more easily than a keyboardist. Sounds can be set to hold using one of the control pedals or control inputs, so you don't have to be limited by the sustain of the guitar. There are also plenty of bass sound options, organ emulations and guitar processing to give you things like baritone guitar or alternate tunings — so there's plenty of scope for combining synth and processed guitar sounds to create something new and fresh sounding. The various modulators and sequencers also contribute when setting up more complex sounds.

In all modes, the SY‑1000 responds much more positively than anything I've tried to date, and that will be hugely important for many guitarists. Tracking is impressively fast and it does a good job of following the strummed or rapidly arpeggiated chords that tended to trip up earlier devices. In fact, you have to try quite hard to confuse this system. Very sloppy playing can produce the occasional spurious noise, of course, but you have to get really messy for that to happen, and accidentally pinched harmonics are generally forgiven. Some care is needed if you set the notes to sustain for a long period, as taking your fingers off the strings can affect the pitch, but damping the strings before you de-fret will avoid this. It's possible to set the Oscillator synth (per-voice) to chromatic or pitch-bend operation, but for patches where you don't plan to bend notes, the chromatic mode sounds more synth-like — the pitch remains rock steady (other than for any modulation applied in the current patch).

The guitar-to-MIDI facility is just as impressive — it's fast, and surprisingly clean. Until now playing something like a piano from MIDI guitar has always shown up the limitations in tracking, and my MIDI recordings have invariably ended with a laborious clean-up job of removing spurious short, low-velocity notes. In contrast, the SY‑1000 followed perfectly in my tests when recording MIDI into Logic Pro X leaving little or nothing to clean up. Used with a GK-equipped guitar, the USB audio/MIDI interface also makes it possible to record each string to a separate audio track in your DAW software, either processed or dry. This six-part recording may then be processed in the DAW or, if captured dry, reprocessed using the SY‑1000.

In conclusion, then, the SY‑1000 impressed me. It represents a significant step forward in guitar synthesis because not only does it make the whole experience more predictable and a lot more user-friendly, but it also offers a much more analogue synth-like sound palette. The editing software makes it really configurable, and there's all the COSM guitar and amp modelling, the impressive effects, and the guitar-to-MIDI facility too. The price might not put it in impulse-buy territory, but it's easily justifiable because this processor covers such a lot of bases — it could save you a fortune on traditional pedals, for example.

While the SY‑300 covers some of the same ground, this guitar synth is more advanced than any other I've used to-date. I've been using Jam Origin's MIDI Guitar software to trigger synth sounds in the box, and that's a great low-cost solution for generating polyphonic MIDI from a standard guitar. In the world of hex pickups, the best-known trailblazers are the various models from Roland/Boss and Fishman.

GK Pickups: What Are They?

With a conventional guitar that's not equipped with GK or GK-compatible pickups, you can still play SY‑300-style synth sounds, and you can access the powerful effects processor too. But the GK pickup allows each string to be processed independently — and that's essential for many of the functions, such as alternate tunings, poly effects and, notably, the new Oscillator synth. A Roland GK pickup system (not supplied with the SY‑1000) can be fitted to most guitars, other than Telecasters with a traditional 'ashtray' bridge (it's essential that the pickup is mounted close to the bridge saddles). Fitting can be permanent with screws, or temporary via adhesive spacers.

The SY‑1000 is a definite improvement on Roland's earlier GK-driven guitar synths, with faster and more reliable tracking, as well as the ability to produce a wide range of analogue synth and/or processed guitar sounds.