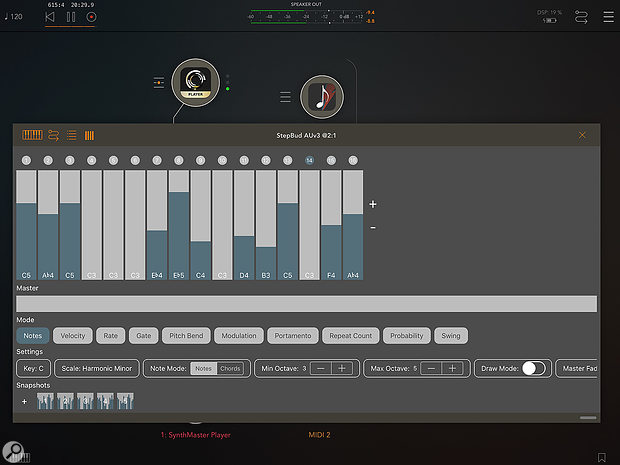 If, like mine, your keyboard skills leave something to be desired, you probably share my love of step sequencers and arpeggiators — these tools can open up some hugely creative possibilities — and while almost every new desktop virtual instrument now seems to include in-built sequencing/arpeggiation options, there are fewer choices for mobile musicians using iOS devices.

A recent arrival on this platform is StepBud, by developer Cem Olcay. It's a dedicated step sequencer and, run stand-alone or within a host that supports MIDI-based AUv3 plug-ins such as Audiobus or AUM, its MIDI sequences can drive any of your favourite iOS synth apps. The app requires iOS 9.3 or later and is compatible with both iPad and iPhone/iPod Touch.

StepBud may not the prettiest software you've ever used, but don't let the simple UI fool you — there's plenty to get your teeth into. Sequences can be set to any length up to 64 steps, and this includes non-standard lengths. So if you run a couple of StepBud instances alongside each other with different step lengths, you can create all sorts of polyrhythmic, evolving patterns.

The bulk of the screen is dominated by the step data entry, and using the buttons beneath this you can enter note pitch, velocity, rate, gate, and a number of other data types into your sequence. A useful Scale option also allows you to confine notes to a specific key/scale combination. The Probability option allows you to add probability-based randomisation to each step and is particularly cool. It can create some very nice variation as your sequence cycles through playback.

...if you run a couple of StepBud instances alongside each other with different step lengths, you can create all sorts of polyrhythmic, evolving patterns.

That's not all in terms of variation, though. The row of buttons at the base of the display, which you can swipe to scroll through additional choices, gives access to a Snapshots function, so you can save multiple patterns in a single StepBud project and switch between them during playback. Another button switches on an interesting chord-sequencing mode.

In use, aside from the occasional MIDI glitch when switching patterns (these were, I suspect, down to the target synth, not to StepBud itself), I had no issues using the app, whether running it standalone, or within Audiobus or AUM. Yes, I'd have liked a comprehensive manual to save me from the occasional bout of head scratching, but on the whole StepBud is very easy to find your way around, and it allows you to get creative very quickly. Having tried it, I'm now very keen to explore Cem's other iOS apps. For any iOS step-sequencer/arpeggiator fans, StepBud is well worth a punt — particularly given the extremely modest asking price.