To create Randy's Prepared Piano, various objects and materials were used to alter the sound of the source instrument before it was recorded. The Randy referred to in the product's title is filmscore musician and orchestrator Randy Kerber, who was hired for the project after someone at Cinesamples observed him 'preparing' a piano by applying a roll of museum putty to the instrument's strings. A conversation revealed that Randy had quite a few other treatment tricks up his sleeve and so the idea of making them into a library was born. 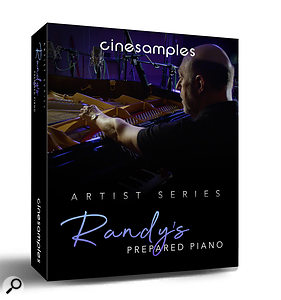 Other techniques in the library include using rubber mallets on the strings, finger muting them, inserting coins between strings, adding chains and ping-pong balls, applying metal bars, scraping strings, tapping the woodwork, and doubling up parts with several octaves of separation.

In all, three pianos were used: one at the MGM Scoring Stage in LA and two at the Hollywood Scoring Studios Stage (also in LA).

Within Kontakt, the instrument's content is split between 22 interfaces. Sixteen of these represent the Hollywood sessions, five are from the MGM recordings (Mute, Nail, Bell, Strum and Knock), and one is a sine wave and pink noise generator which can be used to fortify the piano sounds. The library also provides 10 Multi interfaces which combine some of the prepared techniques with a sine wave from the generator.

All of the interfaces offer a choice of mic setups comprising three separate close-mic options, a room configuration and a preset mix called Full. Any or all of them can be selected and it's also possible to mess with their phase, stereo width, pan position and volume level; to swap left and right channels, and change reverb send amount and pre/post assignment. Furthermore, each mic option has its own panel of EQ controls, so creating a custom sound mix is easy to do.

It's pretty common for virtual instruments to include a rack of effects, but a menu of reverb types is the only thing of that kind that RPP has to offer. In this instance, however, it could be argued that because the piano has been 'prepared', effects processing isn't strictly necessary.

The remaining controls are piano-related and affect pedal and hammer volume and dynamic range.

The pianos themselves are very controlled, responsive and clean. Despite their modifications they still sound more like pianos (or at least keyboard instruments), than crazy effects, and in that respect they differ from the ambient soundscapes that some score libraries offer as patches. To provide some examples, the Metal Bar patch is quite like a slightly detuned harpsichord; Putty Harmonics has a touch of marimba about it, and Finger Mute is like an electric piano.

There's definitely a high-class feel to the sounds in this library, which I suspect is a bi-product of treating the instrument rather than the recording. The mic channel mixing facilities are excellently chosen and users who want to take things further have a top–quality resource to run through their effects.