If there are an infinite number of points in any line, then a Granular synthesis product is theoretically limitless. While Cinesample’s new Soundscapes virtual instrument may not have an eternal bevy of options, it is an intriguing and highly musical departure from the company’s normal fare. Visually the product is also a departure as well, gravitating towards the ‘something cool some guy in Kamchatka put together’ aesthetic as opposed to Cinesample’s typically slick Hollywood‑esque interfaces. The 1.5GB library requires the free or paid versions of Kontakt, with system load dependent on the processing options selected in any given patch. 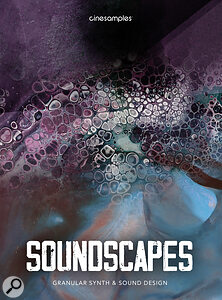 Granular Synthesis is a technique which allows users to select one or more tiny grains (1‑50 ms in length) from a longer waveform and combine them into compelling new complex sounds. The Cinesamples approach to this is based on a library of samples taken from recordings of violinist Michael Levine, which are divided into textures, pulses, pads, one‑shots and sound design patches. Once you have selected a patch, the Auto Map feature forces the sound to at least loosely conform to standard western tuning on your keyboard. Users can then tweak the Motion setting (which defines how far the movement is achieved from your selected grain), and Density (how many grains are played at once, which can be randomised).

The Grain Overlap setting determines how much crossfading occurs between grains; a low value often leads to a pointillistic sound with space, a higher value can lead to a more sustained sound even within transient textures. Below this, the Jitter setting can further randomise grain generation away from the playhead, while the handy Width dial increases the stereo width.

Within each patch category are a number sub‑categories of waveforms, each with multiple sounds available. I therefore began my review by selecting the ‘ONE SHOT Atlantis Pizz’ patch, selecting the Electric Pizz subcategory, and finally one of the many recorded pizzes using the A string of the violin. At this point all it took was the raising of the density and grain overlap to achieve an instant moody plucked melodic instrument with a magical quality; such quick results are perhaps the highlight of this package.

While Soundscapes is not a revolutionary entry into the virtual instrument landscape, it is nevertheless a simple and attractive tool to allow composers and sound designers to access the fascinating world of granular synthesis.

Moving through the rest of the library, a recurring criticism of the product becomes apparent: as the sounds are drawn from a single violinist, it’s not very robust on the low end. Aesthetically this makes sense for Cinesamples, given that the timbral quality of these samples can more easily integrate into the kind of orchestral textures the company is most famous for. Yet for those for whom this is not enough, it’s easy to drag custom user waveforms into the interface.

While Soundscapes is not a revolutionary entry into the virtual instrument landscape, it is nevertheless a simple and attractive tool to allow composers and sound designers to access the fascinating world of granular synthesis. It could be an intriguing addition to your toolset, especially if your work with traditional scores could use a bit more of a hybrid touch.