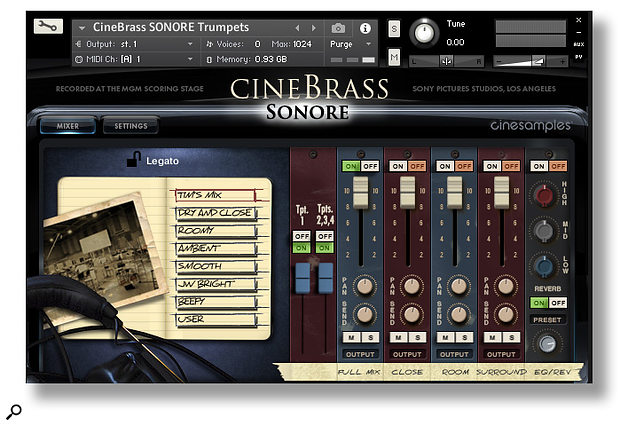 Cinesamples are the sort of company who instigate a project, then stick with it. Since releasing their inaugural CineBrass library (reviewed in SOS in March 2012), they gradually expanded the concept into the massive multi-volume CineSymphony series, comprising strings, brass, woodwinds, percussion, harp and keyboards. Having grown up in an era when built-in obsolescence had not quite taken over the world, I appreciate this steadfast approach — it indicates confidence and stability at a time when new products seem to come and go in a matter of months.

The latest addition to the Cinesamples stable is CineBrass Sonore, which focuses on orchestral trumpet and horn sections played with maximum resonance to recreate the rich, warm, full-bodied tone heard in classic Hollywood 1990s film scores. The producers set out to capture the sonic DNA of Jurassic Park's soundtrack by studying the session recall sheets stored at the MGM Scoring Stage, matching the microphones and replicating the settings on the original vintage preamps and historic outboard units — bringing these extinct creatures back to life, you might say. 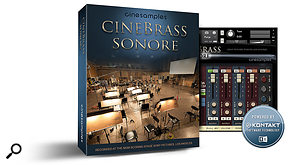 The results are immediately obvious: rather than brashly brassy, the sections sound broad and melodious, with a wide, generous timbre capable of carrying noble fanfares and adventure themes. The trumpets were recorded with separation on the lead instrument, which also has the option of a light, fader-controlled vibrato (rare in orchestral scores). The other three trumpets are mixed together, and use no vibrato for fear of the section sound turning into a dreadful Mariachi mash-up.

I was knocked out by the trumpets' long notes, which remain remarkably firm, steady and superbly controlled across their wide E3-G6 range. The section also performs short, tight 'secco' staccatos, bright, attacking sforzandos and one-second accents, which the makers have used as a velocity-driven overlay to add bite to the sustains. In addition, there are useful forte-piano samples, short 'half notes' and fast cresc-dim swells.

So there you have it: 'John Williams' brass in a box', as one user put it.

The four horns' smaller articulation menu includes majestic sustains and some incisive beefy stabs. Both sections have an excellent, nimble and naturalistic legato mode which responds equally well to fast playing and slow-moving heroic lead lines. Recorded from standard close, room and surround mic positions, the samples are presented in a choice of mixes with optional tape saturation and reverb effects: I found the 'JW Bright' mix added definition and presence to the horns, thus tying them in with the brighter-sounding trumpets.

So there you have it: 'John Williams' brass in a box', as one user put it. This library incorporates samples from Cinesamples' discontinued '90s Retro Trumpets; the content has been remixed and reprogrammed, the legatos have been radically spiffed up and French horns added, bringing the library up to the requisite CineSymphony standard. CineBrass Sonore (7.12GB) works with the free Kontakt Player and the full version of Kontakt 5.7.2 and above.