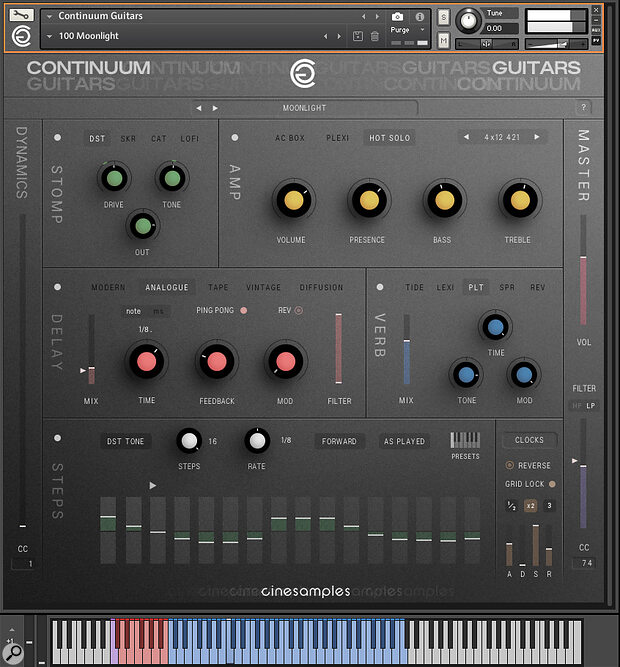 You might argue that media composers are spoilt for choice when it comes to cinematic sample libraries where guitars are the predominant underlying sound source. However, I’m not sure quite so many of these could also cross over and appeal to more conventional song/music producers. You might make that case for Cinesamples’ Continuum Guitars, though. The library requires Kontakt 6.5.2 or later and will work with either the full or free version of NI’s popular sampler. By some modern standards, it contains a fairly modest 2GB of sample content but, amongst its 200 global presets, while there are plenty of designed sounds that score composers will love, equally, there are some presets that could easily drop something more obviously guitar‑like into a pop, rock or electronic track.

That flexibility is perhaps derived from two elements of the design. First, the UI’s bottom‑most panel — which toggles between a step sequencer (STEP mode) and a pair of X‑Y controllers (VECTOR mode) — provides some excellent modulation and rhythmic options. Second, the sample content is built upon a core set of 16 sound sources (these can be selected individually in the Sampler sub‑panel on the right of the bottom‑most part of the UI) and, while some of these are obviously cinematic in nature, there are also some more conventional guitar tones that, with the right settings elsewhere, can be used to generate some cool pop‑rock rhythmic chord sequences.

I can see busy media composers lapping this up in their never‑ending quest to find some fresh sonic inspiration.

The upper half of the UI offers a very intuitive virtual guitar rig, with distortion, amp, delay and reverb modelling. This is all super‑easy to navigate but manages to provide plenty of sound‑shaping flexibility. However, it’s the lower panel where the really cool stuff happens.

Whether you get STEP or VECTOR mode here depends upon which of the 16 sound sources is currently selected. STEP mode provides a powerful and flexible step sequencer/arpeggiator with up to 12 keyswitchable configurations so you can change both the performance and the sound design on the fly; it’s very cool. In VECTOR mode, you get two, pre‑configured, X‑Y pads to modulate an upper and lower MIDI note range. Again, you can save — and then switch between — X‑Y modulation positions, with control over the modulation speed. This is great for designing complex evolving pad/drone‑type sounds and the presets built on these vector sound sources could be used to create a whole cue on their own.

I can see busy media composers lapping this up in their never‑ending quest to find some fresh sonic inspiration. There is also potential for some guitar‑like ear candy sounds for producers of more conventional song‑based music. Of course, at this price, Continuum Guitars is unlikely to be a casual purchase, but it delivers sonically, is intuitive on first use and yet rewards those who dig in. Well worth a look.