The TC4 aims to make it easy to use mastering hardware with your DAW.

Coleman Audio's TC4 is described as a 'Mastering Transfer Console', meaning it combines a monitor controller and a hardware insert switcher. Like most Coleman products, the monitoring and transfer signal paths are entirely passive — the only active electronics comprise a headphone amp and a mono summing stage. Insert signal switching is performed with sealed relays.

Although featuring fewer input sources and output destinations, the TC4's monitor-control facilities are essentially those of the company's M3PH MkIII, and it's all very straightforward. Two stereo balanced inputs are provided, one on XLRs and the other on quarter-inch TRS sockets, with a front-panel button as source selector. The chosen signal passes to the insert chain, and then on to the monitoring facilities. Another button allows monitoring of the source signal rather than the return from the insert chain. More buttons mute the left or right speakers, select the mono sum and introduce a polarity inversion — with the polarity-invert and mono-summing facilities ordered correctly, so that combining both allows auditioning of the stereo difference (Sides) signal, which is especially useful when mastering.

Controlling the monitoring output level is Coleman's familiar 47-step rotary attenuator, with quad-ganged switches fitted with precision-matched SMD resistors to create a balanced stereo volume control. The benefits are that inter-channel tracking remains within 0.05dB at all listening levels, ensuring stable stereo imaging, and a good common-mode rejection figure. The monitoring signal can be routed to either of two outputs for main and alternate speakers, both connected with XLRs.

The TC4 is well thought out, and its technical performance is limited only by the equipment you connect to it.

A very beefy headphone amp with its own volume control feeds a front-panel, quarter-inch socket. The headphone signal isn't affected by the speaker volume control, mute or mono buttons, but the polarity inversion does affect the headphone monitoring. A second pair of TRS sockets on the rear provides dedicated outputs for an external metering system, and these signals are affected by the muting, mono and polarity buttons. I assumed these meter outputs would be actively buffered, but plugging in while monitoring a signal on the speakers revealed that this isn't the case.

Unusually, the TC4 employs the digital AES59 standard for D‑sub wiring, despite it being an analogue device — but this approach does have advantages here.

The 'mastering transfer console' aspect of the TC4 is the insert-switching section, which is configured to route the selected monitoring source through a chain of four external signal processing devices, any of which can be individually selected or bypassed. The output from this processing chain is presented on a pair of XLRs as the 'Master Output' to be recorded back into the DAW (or other recorder). The four stereo inserts are accessed via a pair of 25-pin D‑subs. Initially, I assumed these would be wired to the AES59 (Tascam) analogue standard, with eight outputs on one socket and eight inputs on the other, but Coleman have instead used the AES59 digital standard, which provides four inputs and four outputs per D‑sub connector. Although a non-standard approach, it makes a lot of practical sense, as each D‑sub carries all the signals for two stereo outboard devices, making rack wiring a little easier and neater. The channel wiring is the same for both AES59 formats, so AES3 breakout cables can be used for XLR connections, or analogue breakouts with jacks for patchbay wiring.

Four illuminated buttons on the front determine which insert points are active, and show white when bypassed and red when engaged. A fifth button swaps the sequence of the first and second inserts, allowing the order of a compressor and EQ to be reversed, for example. As mentioned earlier, another button allows comparison of the signals entering and leaving the chain, so the benefit of your processing can be assessed. 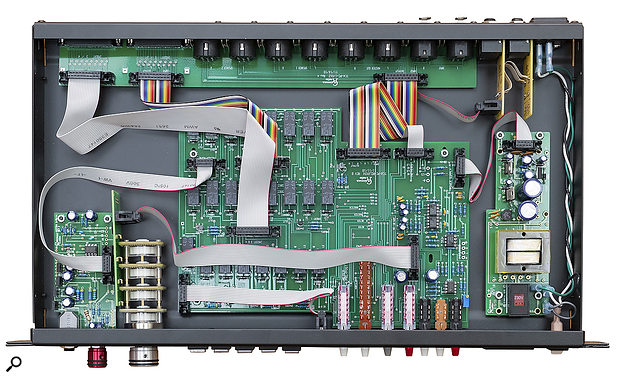 A peep inside: you can see the ganged balanced switched attenuator, relay switching for inserts and monitoring, and the switchable-voltage mains PSU.

The TC4 is well thought out, and its technical performance is limited only by the equipment you connect to it. If I had to be critical, I'd say the volume control could feel a little smoother in use (though the sound quality is very good), and a level-trim control for the post-insert monitoring signal would make it easier to judge signal processing at comparable levels. Entirely passive monitoring signal paths have both pros and cons, but in practice, when cables are kept reasonably short, they work well; that's the case here.

This is a cost-effective, high-quality 'baby' mastering transfer console. It will suit the requirements of many project mastering studios seeking a convenient and affordable way to integrate mastering hardware with a DAW.

Most mastering transfer consoles, such as the Dangerous Music Master, SPL's DMC and Crookwood's M1, cost two or three times more than the Coleman TC4.

A very attractive passive monitor controller that offers the ability to integrate outboard mastering devices with a DAW.