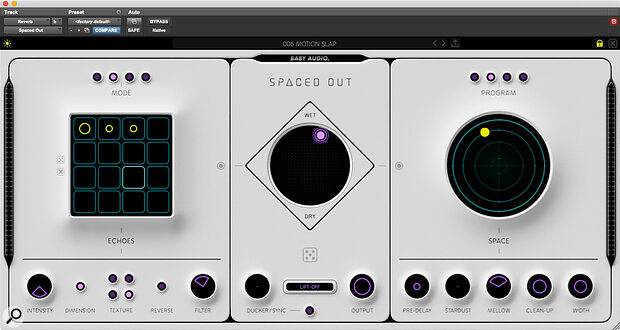 This ‘wet effects generator’ is aimed squarely at modern productions.

Baby Audio made their mark with a couple of plug‑ins devoted to very specific effects: I Heart NY is a simple but effective parallel compressor, while Super VHS lovingly recreates analogue video tape. They’re both great and have served as springboards to more ambitious products: first the self‑explanatory Parallel Aggressor and now Spaced Out.

Authorised using a simple licence code, the new plug‑in is described as a “wet effects generator”. Its freely resizeable window hosts two main effects modules, arranged either side of a central panel that balances the output of the two and applies additional global processing. The left module produces delay‑based effects while the right‑side module is a reverb, but neither is entirely conventional.

Delay effects are created using a 16‑step sequencer. Each step can be set to on, off or ‘low accent’, which produces a darker, quieter repeat, and the whole thing can operate at host tempo, in double time, or in dotted or triplet mode. The small circular controls below the sequencer grid allow a surprisingly wide range of sounds to be created. Intensity can be used to adjust both conventional feedback and the relative level of early and late sequencer steps, while Dimension introduces stereo widening or auto‑panning. Four available Textures bear the self‑explanatory names Clean, Wonky Tape, Lofi and Hazy, and the echoes can be reversed or filtered.

For the reverb engine, the grid is replaced by a circular window. Dragging a large yellow blob in this circle changes not only the length of the reverb but also the character and extent of the modulation applied to it. Once again, a handful of additional parameters endow it with surprising versatility: four quite different reverb programs are selected using the buttons at the top, while the five circular controls at the bottom implement more than just prosaic things like pre‑delay, stereo width and high/low‑pass filtering. Of particular note is Stardust, which introduces a ‘shimmer’ effect of the kind so beloved by today’s guitarists.

The circular control in the central section offers three‑way balance over the levels of the delay, reverb and dry signal, but the most interesting parameters in this pane relate to global post‑processing. A Ducker can respond to the dry signal, for conventional ducking of the effect, or to the tempo grid for pulsing ‘side‑chain compression’ effects. There’s also a handy randomiser for when you run out of ideas, and a button labelled Lift‑off which applies preset compression, EQ and M‑S processing to the wet signal to ‘glue’ it together.

What all this adds up to is a plug‑in that’s very much tailored to modern production trends. Although there are ‘vintage’ aspects to Spaced Out’s sound, it certainly isn’t designed to replicate every nuance of an EMT plate or Roland Space Echo. Nor does it major on authentic recreations of real spaces. But what it can do is generate sustained pad‑like textures from backing vocals, create instant dream‑pop guitar, transport synth leads to far‑off planets, apply colourful delay throws to individual words in a lead vocal and much more, as the excellent preset library amply demonstrates.

What all this adds up to is a plug‑in that’s very much tailored to modern production trends.

For the most part, Spaced Out is less the sort of effect you’d place on an aux send to bind a mix together and more something you’d use as an insert processor. Its more textural settings can take up quite a bit of space in a mix, but dial down the feedback and it can also produce interesting treated slap delays, warbles and flanged ambiences, helping to give underwhelming sources a bit of character. Its focus on contemporary sounds is refreshing, and makes it the perfect complement to more conventional reverbs and delays such as those supplied with most DAWs. Anyone mixing modern pop or electronica should find this a really valuable tool, which adds to rather than duplicates their existing plug‑ins.

Spaced Out is a polished and surprisingly versatile source of cutting‑edge delay, reverb and modulation effects.