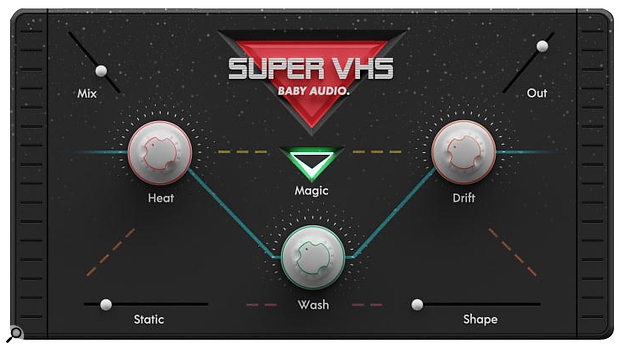 From Stranger Things to Vaporwave, the '80s are back again (or... again again), and that can only mean it's time to dust off that VHS recorder, right? Whether by renting tapes or recording TV shows at home, analogue VHS tape was the way to watch back in the decade of hairspray and stonewashed denim — and for some time beyond that too. Not only was video resolution low and the image fuzzy and unpredictable by modern, digital standards, but the audio was distinctly lo-fi too. A characteristic crunch, low dynamic range, distortion, pitch fluttering and warping from the head 'tracking', and rolled-off treble and bass were just some of the sonic compromises that formed part of the VHS experience.

But beauty is in the ear of the listener, and just as the wandering warbles of cassette tape have returned, bringing with them a whole slew of ambient cassette artists, so too VHS visuals and their accompanying sonic non–linearities have made a comeback. Baby Audio's second plug-in, Super VHS (for Mac/Windows, and VST, VST3, AU and AAX formats), joins a small group trying to bring a bit of lo-fi nostalgia into our lives. Super VHS is easy to use compared with some, as a number of functions (an EQ, a bit-crusher and a limiter) are hidden and preset, with the rest of the effects controlled via only one knob, slider or button.

Just as the wandering warbles of cassette tape have returned, bringing with them a whole slew of ambient cassette artists, so too VHS visuals and their accompanying sonic nonlinearities have made a comeback.

The Heat control provides saturation that, past the halfway mark, quickly turns into a fizzy distortion. At 10 to 11 o'clock it's a nice warm driver for many instruments, and further up things can get pretty extreme. The Magic button is a one-setting chorus. It's a cool effect and very '80s, though I suspect a variable knob — or perhaps light that gets brighter as you slide it up and down — would be better, as this does add a lot of chorus on its only setting, and I often wanted less.

Drift makes pitch wander and occasionally 'snag' (dip down and up suddenly), in a manner that's reminiscent of tracking errors on VHS playback. When used together with the overall Mix slider, this effect is a great set-and-forget way to introduce subtle variation, or to obliterate any sense of digital pitch sensibilities using higher settings. The Wash knob is an intentionally 'bad' reverb, which emulates cheap reverb units used on music for distributor logos at the start of a rental video tape. I really liked it on a lot of sources, especially synths and backing vocals.

I put the plug-in straight onto a DI'd Rhodes piano track, and using 15 percent Mix, 45 percent Heat and a bit of Drift and Wash, and found it added a nice subtle variation to the instrument, without seeming heavy handed. On the opposite end of the scale, heavier settings make simple synth patches come to life, especially if you're using a hardware synth with no built-in effects.

The Static control brings in a characteristic VHS hum, noise and fuzz, which is quite realistic and very consistent. It would be nice to have a 'variation' control for this too, to add in a bit of random crackle, flutter and so on, as was often heard on worn VHS tapes when playback commenced.

The Shape control is a bit-crusher with nine presets. Since I associate VHS processing with analogue effects, I'd probably leave this job to a more tweakable bit-crusher, unless the plug-in is updated to give access to sample-rate and bit-depth sliders. But I did find myself curious to poke around with the internal high-shelf, limiter, and bit-crusher, even with just the one knob for each.

At $49 (with a $29 intro price) this is a fun plug-in that won't break the bank, but it does compete directly with some far more tweakable effects exhibiting a similar sonic style. I think Baby Audio should perhaps consider expanding the plug-in controls using a 'back page', in the manner of Wavesfactory Cassette, which would add functionality while keeping the front nice and simple. Still, as it stands, Super VHS is an easy-to-use plug-in that gives a VHS vibe without much effort.