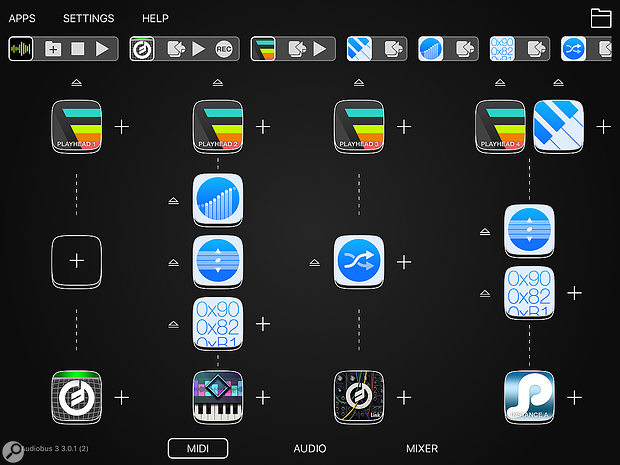 Audiobus 3 in all its MIDI glory. Notice how it’s possible to have multiple input, effect, and output apps in a single pipeline.

Audiobus was launched in 2012, providing an easy way to stream audio between apps on iOS. You could pick an input app, such as an instrument, filter the generated audio through an effect app, and then either route the audio to an output app to record the signal (or further process it), or send it directly to a hardware output. Audiobus 2 arrived in 2014 with the ability to have multiple pipelines and more than one effect per pipeline, and it became possible to store the configuration of a session as a preset.

Around this time, Apple announced Inter-App Audio as a feature in iOS 7, which also made it possible to stream audio between apps, but without the need for an additional app. While there was some initial confusion as to how Audiobus and Inter-App Audio might coexist, since both essentially solved the same problem, it turned out they did so in different ways.

Inter-App Audio is based on the concept of having a host app, such as GarageBand, and various node apps, such as effects and instruments, that can either stream audio to the host or have the host stream audio to them and then stream the output back again. This results in simpler configurations, but no way of managing the complete state of a set-up in the way you can with Audiobus presets. However, despite the overlap in functionality, Audiobus is compatible with Inter-App Audio as a host, and can make use of node apps in the same way as apps written to support Audiobus natively. (Audiobus is also capable of hosting Audio Unit Extensions.) 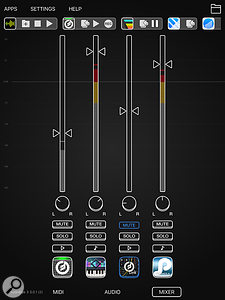 While not perhaps the most aesthetically pleasing mixer in the world, it does the job.Apps need to be tweaked and updated with the latest version of the Audiobus SDK in order to support MIDI pipelines. One reason for this, aside from the obvious one of needing to be able to send and receive MIDI data to and from Audiobus, is because you can only run one instance of an app at a time on iOS. So, to be useful, a MIDI effect app must be able to support multiple MIDI streams, each containing a different version of the same effect. At the time of launch there were already several compatible apps available.

The second new page in Audiobus 3 is the mixer, where each input in an audio pipeline gets its own dedicated channel strip, even where multiple input apps are used in a single pipeline. The mixer is relatively simple, with the familiar level (including metering), pan, mute and solo controls putting in an appearance. An additional button appears as a quaver if the audio input app is an instrument and, when touched, plays a few notes so you can gauge the level without having to switch apps. If the input app supports an Audiobus play trigger, this button will display a triangular play symbol instead with the corresponding behaviour. One thing that would be a nice touch, especially with the addition of MIDI in Audiobus 3, is if you could remotely control the mixer using a MIDI controller.

Audiobus 3 is an impressive app that will no doubt continue to be essential for sophisticated audio and MIDI productions on iOS. The addition of MIDI pipelines is really neat, opening up many possibilities for new apps that can generate or manipulate MIDI data. Stability issues remain, which is perhaps inevitable when you’re multitasking so many different apps with their own bugs and idiosyncrasies. But Audiobus is usually graceful when a problem occurs, displaying a warning sign next to the corresponding page title and inviting you to relaunch the problematic app.

You can purchase Audiobus 3 from the App Store for £$9.99, and it’s compatible with both the iPad and iPhone. A new purchase is required even if you’ve bought previous versions, but this seems fair when you consider the amount of work that’s clearly gone into this new incarnation.