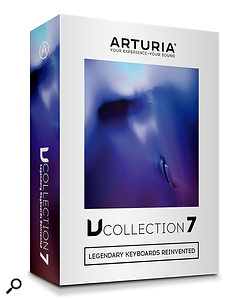 Having avoided them in their infancy, I reviewed my first soft synth 16 years ago this month. Running on just 64MB of RAM on a Mac G4, it was a recreation of the ARP Odyssey and, even then, it captured much of the essence of the original synth. In the intervening years soft synths have come on in leaps and bounds, taking full advantage of the power that modern computers can offer. But if someone had told the younger me that in 2019 it would be possible to buy a bundle containing much enhanced equivalents of the ARP 2600, the Buchla Music Easel, the Casio CZ1, the EMS Synthi AKS, the Fairlight CMI/IIx, the Hohner Clavinet D6, the Mellotron M400, Moog Minimoog and Modular systems, the Oberheim Matrix 12 and SEM (and, by extension 4-Voice and 8-Voice), the Roland Jupiter 8, the Sequential Prophet 5 and VS, the Solina String Synth, the Synclavier, the Yamaha CS80 and DX7, Rhodes 73 and Wurlitzer EP200 e-pianos, Hammond B3, Farfisa Compact Duo and Vox Continental 300 organs, plus a selection of acoustic pianos, all for less than £20 per instrument, I would have been stunned.

Of the instruments listed, the ones that mark the major step up from Arturia's V Collection 6 to V Collection 7 are emulations of the Casio CZ series, the EMS Synthi AKS and the Mellotron, but I make no apologies for listing the complete set of instruments in the previous paragraph; it's one thing to write 'lots of desirable synthesisers, organs and pianos' but quite another to read the names of every instrument that V7 contains. That many of these emulations are, for most musical purposes, accurate enough to use in place of the originals is even more remarkable. Sure, fanatics will point out that there are cases in which some of them fail to emulate their inspirations with implausible accuracy but, since many of those people have never owned (and probably never will own) the likes of a Synthi AKS, a Moog System 55, an Oberheim 8-Voice or a Yamaha CS80, the point is at best a moot one.

Like other Arturia soft synths, the architecture of CZ V starts with that of the synths on which it's based and then takes things much further. Before investigating all of the extra facilities on offer, I conducted an A/B comparison between the soft synth and my CZ‑1. First, I checked the unmodified waveforms and found them to sound very similar to those of the original. That wasn't a great surprise; this is a case of one digital synth emulating another so, even if the original code isn't available, it shouldn't be impossible to recreate the underlying waveforms. Sure, tiny differences in their shapes will make subtle differences to their timbres, and we should also remember that the D–A converters in the original CZ‑1 were products of the 1980s, whereas those in your computer or external converter should have far greater accuracy. (A vintage CZ D–A mode in CZ V seeks to emulate the older electronics, but I found it to be too subtle to be of any great significance.) But having said all of that, the underlying timbre of CZ V is clearly that of the Casio synths. If I had to find a difference, it's that CZ V was a touch brighter than my CZ‑1, giving the impression that the sound of the vintage synth had more body. But this was an illusion; with a few tweaks and an occasional touch of EQ I could make many of the two synths' sounds indistinguishable from one another. 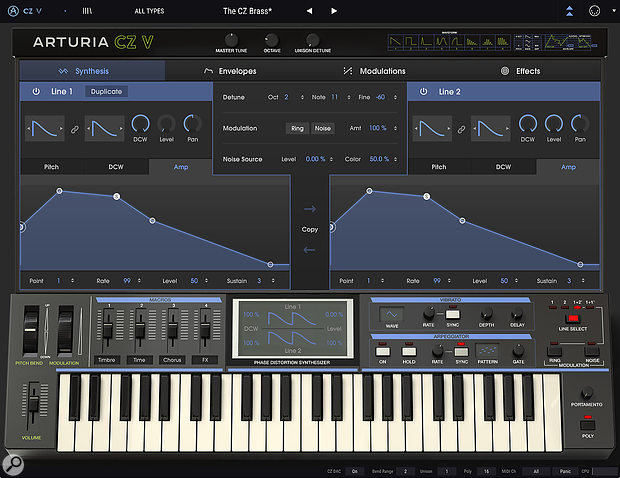 Having tested this, I explored the programming on both. The equivalence could be excellent; the phase distortion equivalent of a filter sweep was recreated well on CZ V, and careful programming of amplitude shaping and modulation generated sounds that, while not always identical to the original's, could be used interchangeably without hesitation. Moving on, things such as the ability to combine two Lines of synthesis, add detune, apply ring modulation and affect the sound using velocity and aftertouch all seemed to be implemented correctly. In short, if you limit CZ V to the capabilities of a CZ‑1, the two can not only sound but respond in an all but identical fashion. If you're intent on finding small differences you'll be able to do so, but again I would argue that they're of no musical consequence. Hmm... that's not quite true. CZ V will generate 32 voices when both Lines are used, whereas the flagship CZ‑1 will generate just eight and the polyphony of the smaller CZs drops to four. That has musical consequence!

Next, I investigated the extensions that take CZ V beyond the CZ series. Some of these are simple; others run deeper. For example, you can combine the three resonant waveforms to create new timbres, which isn't possible on any of the original instruments. Even more useful is the ability to craft your own waveforms and phase distortion envelopes, allowing you to create sounds that no Casio could ever produce, but still with that recognisable CZ character. Other valuable additions include enhanced single- and multi-triggering envelopes with up to 16 elements, as well as user-definable slopes and curves, two enhanced LFOs with monophonic and polyphonic modes, a dedicated sync'able Sample & Hold, and an eight-row, 16-column modulation matrix that allows you to map 24 sources to more than 50 destinations. Clearly, these take us far beyond the original Casio architecture.

There are also four slots for effects units that can be configured as either two sets of two effects (for Lines 1 and 2 individually) or as a single chain of four effects for a composite sound. With nine effect types available, each with a sensible selection of parameters, you'll not be short of options. Indeed, one of the effects is a multi–mode filter offering low-pass, band-pass, high-pass, and two types of comb filter, each with 12, 24 and 36 dB/oct modes. This extends the range of available sounds hugely, not least because you can use the modulation matrix to direct any of the contours to the cutoff frequency, thus making CZ V paraphonic when you play multiple notes, or turning it into a powerful monosynth that combines subtractive and phase distortion synthesis when you play it monophonically.

Like CZ V, Synthi V starts by emulating its inspiration — in this case the EMS Synthi AKS — and then adds a great deal to the original architecture. But, despite these additions, its GUI remains close to that of the AKS, and when I pulled out my original Synthi Book Of Sounds (which was published by EMS back when a pint of Old Peculiar cost fourpence farthing) I was able to patch Synthi V's modified pin matrix and adjust all of its knobs without confusion. I then discovered that patching it according to the charts in the book didn't produce the sounds that I had expected... but this didn't deter me because neither does doing so on my VCS3. Nor, indeed, did the two synths produce identical sounds when I patched them side-by-side. But this isn't the criticism it might appear: if someone were to ask me whether Synthi V emulates the Synthi AKS accurately, I would answer, 'which Synthi AKS?' Even if you record which types of pin are used in which holes of the matrix and then set every knob as carefully as possible, I doubt that you'll find two Synthis that generate precisely the same sounds as each other or respond in precisely the same way when you patch them identically. 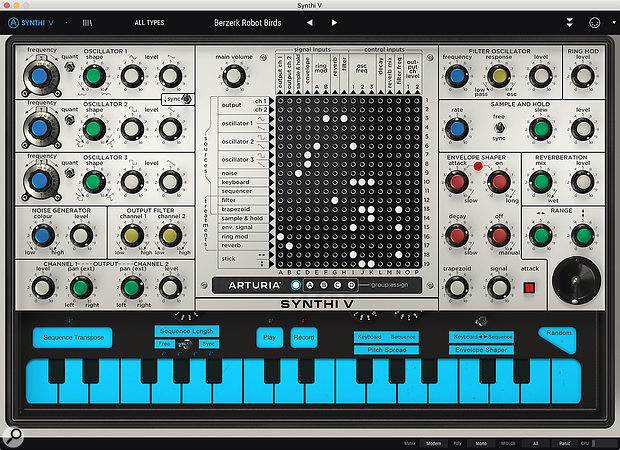 The Synthi V — the modulation pins work as they're supposed to do and you'll never, ever lose them.

In fact, despite the aura that surrounds EMS synthesizers, I have found them for more than 40 years to be unpredictable and frustrating although, if you work within their strengths (which include evolving electronic timbres, harsh rhythmic effects plus, of course, the bubbling noises that adorn Hawkwind's Space Ritual), they can sound wonderful. In contrast, Synthi V is far more predictable and can span the whole gamut of synthesised sounds from simple monosynth leads and basses to 4-voice polyphonic sounds to the most complex of effects. It's also eminently playable, in large part because it tracks correctly and stays in tune. There's even a switch that quantises the oscillator frequencies to notes on the chromatic scale to ease the programming of conventional patches. In a similar vein, there's a Vintage/Modern switch that determines how the matrix responds when you add pins to it: Vintage mode emulates the bleed, voltage drop and instability of the original (although I found that it can still be too polite in this regard), whereas the Modern setting provides ideal patching between the modules, allowing you to programme the thing with predictable results.

Talking of pins, there were three types available for the original, which I characterise as barely accurate, not as accurate as that, and attenuators. In contrast, there are five types in the soft synth, and these are always accurate. The first four multiply the source CVs by 100, 75, 50 or 25 percent, while Grouping pins allow you to affect multiple destinations using a single controller or modulator.

Synthi V's extra facilities take it far beyond the original synth, with numerous additional modules and facilities including oscillator sync, Sample & Hold, five powerful function generators that generate complex contours that you can direct outside of the pin matrix to many of the other parameters, an additional sync'able LFO, an additional 7x4 modulation matrix, a form of vector synthesis provided by animating and looping the joystick, and a three-slot serial/parallel effects section that can host your selection from 10 effects types. Oh yes... and in addition to the 256-event sequencer that emulates the original 'S' in the AKS, there's a second, 32-step sequencer that you can use for note sequencing and for modulating up to four voicing parameters simultaneously.

Inevitably, programming Synthi V can be as long-winded as programming the original instrument, but it can be worth it and, thanks to Arturia's usual patch memory architecture, you can return to your music the following morning and continue working with the same sound you that had the previous night. If you prefer the excitement (or frustration) that awaits you every time that you switch on an original AKS, that's fine. But for recording and replaying music in a conventional fashion I would turn to Synthi V every time.