There are numerous Mellotron emulators out there, ranging from workstations that include a few PCM samples from which a handful of the classic sounds are recreated, to keyboards that are capable of loading libraries of Mellotron samples, through dedicated hardware instruments, to existing soft synths that offer complete Mellotron libraries and many additional sounds and facilities. Consequently, Mellotron V will have to offer something different to survive in such a crowded space — and it does.

When you launch Mellotron V it presents you with an image of a grubby and battered M400. I don't know why manufacturers do this; I like my instruments to be pristine in appearance, performance and sound, and if I were asked to play a Mellotron that looked like this, I would clean it first! 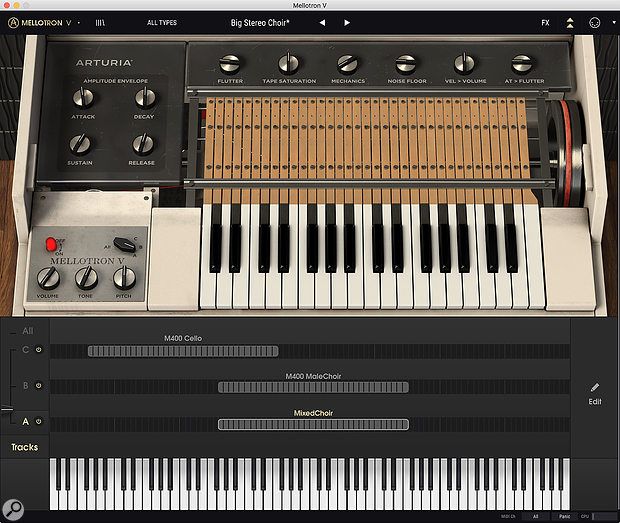 Mellotron V's extended view gives you an ADSR envelope and the opportunity to add or remove some of the characteristics that make the originals so charming (or infuriating).

The visible controls are those of the M400 but with an additional sound selection position that allows you to play all three tracks simultaneously. If you then access the advanced controls, you can tailor your sounds with an ADSR volume contour that affects all of the tracks equally, and adjust the levels of flutter, tape saturation, mechanical noise, and electrical hum and tape noise, the last with a gate that emulates the tape heads moving onto and off the tape. You can also control the loudness using MIDI velocity, and the amount of tape flutter using aftertouch. (This isn't accurate, but it's interesting.) In addition, there are six effects slots: four assignable from a list of 12 programmable effects, plus an 'amp' slot and a reverb slot with nine tweakable algorithms.

The factory sounds are based upon samples derived from the Mk1, Mk2, M300 and M400 Mellotrons, and I suspect that many players will be happy to use these unmodified. But it's when you click on the Edit button that things get exciting. Firstly, you can determine the start and end points for the playback of each of the tracks, and secondly, you can set start and end points for a loop — either forward or alternating — to overcome the eight-second limitation of the original instruments. To help you to set these points, you can zoom in and out on the time axis, and a very short crossfade helps to minimise clicks, although not always successfully.

As I was putting my CZ1 and VCS3 away at the end of the review, I wasn't quite sure when or why I would take them out again.

But the real treasure is Mellotron V's ability to load the first eight seconds of existing audio files into each track, which is the equivalent of creating your own tape racks. If you load a single sample into a track, you can distribute it over a region extending up to a maximum of four octaves. If you did this using a conventional sampler, you would create something that sounded like the voice of doom at the bottom end and a chipmunks' birthday party at the top. In contrast, Mellotron V provides a Stretch function that resynthesises the sample for each note on the keyboard. The results are not always perfect — time–stretching artifacts can be especially noticeable with static sounds — but if used carefully Stretch does much to retain the nature of the original sound as well as the integrity of any timed events such as vibrato. You can also load multiple samples into a track, up to a maximum of two factory sounds, eight user samples, or two factory sounds plus six user samples, distributing them without overlaps within a maximum range of 96 semitones, and transposing them by up to ±24 semitones. What's more, you can apply individual ADSR volume contours to each of the user samples, whereupon the main 'macro' ADSR will act as a global modifier upon them. With attack, decay and release times ranging from 1ms to 30s, you can create anything ranging from the snappiest to the most languorous of sounds. You can even add the playback effects — tape noise, tape saturation, mechanical noise, and tape flutter — to your samples to help make them sound Mellotron–esque.

As with all of Arturia's other soft synths, you can control and automate Mellotron V over MIDI. My favourite control is the modulation wheel, which slides the virtual tape heads between the A, B and C tracks to access sounds and alter their A/B or B/C mixes as you play. Another advantage of a digital Mellotron is that you can play a single note rapidly without worrying about whether the spring has had time to return the tape to its starting position. The only problem I experienced with Mellotron V was that loading very short WAV files (of the order of a few milliseconds) would crash it. Other than that, everything worked and sounded as it should.

I very much liked all of the new instruments and features in V Collection 7. The three new soft synths are great, and the improvements to B3 (Arturia's Hammond emulation — see box) are very welcome. Furthermore, all of these instruments ran on my MacBook Pro with much lower latencies than the defaults, and I didn't run into any problems with aliasing. Indeed, as I was putting my CZ–1 and VCS3 away at the end of the review, I wasn't quite sure when or why I would take them out again. As for my Mellotrons and Hammonds...

I've been recording and performing with emulations for 25 years and almost no-one seems to mind (or even to notice). Having said that, I have had conversations with numpties who tell me that they can always hear when virtual analogue synths, sampled Mellotrons and electronic drums are used, and that they hate them all. But when I ask them which sounds are 'real' on any given track and which were digitally recreated, they invariably can't tell which is which. Consequently, were you to lock away all of my analogue instruments and leave me to perform or record with only my Korg OASYS and a copy of V Collection 7, I suspect that I wouldn't have any problems.

If Arturia would just add an RMI 368 Electra–piano to V Collection 8, plus a Pianet T, an ARP ProSoloist, a set of Taurus pedals, a Korg 700S and a PS3200, a Logan String Melody II, a Polymoog Synthesizer and... oh. OK, there are still many desirable keyboards left to emulate, but the breadth of V7 is already staggering and, for most musical purposes, I think that you'll find it more than accurate enough to replace the original instruments. Sure, you'll be able to conduct A/B tests with each of CZ V, Synthi V and Mellotron V and find small differences between the originals and the soft synths, but I think that that would be missing the point. CZ V sounds like a Casio, Synthi V has all of the wacky potential of the original without the inconsistencies that might be fun in the bedroom but which are a pain in the arse on stage and in the studio, and Mellotron V sounds like a Mellotron, albeit an unusually well-behaved one. At rather less than £20around $20 per instrument, V Collection 7 really is remarkable value. 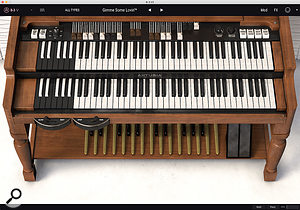 There's a significant upgrade to Arturia's Hammond organ emulator in V Collection 7, which has evolved from B3 V to B3 V2. If I'm honest, B3 V had some issues, but V2 sounds a lot better, and the addition of seven different organ models considerably extends what's on offer. I have no idea whether these models relate to genuine changes in Hammond's tonewheel engine and its preamps, but the range of timbres is now much extended, from the dark voicing of the 1960 A100 to the brighter, more insistent tones of the 1969 C3.

Other improvements include buss-bar triggering (if you play a note with a low MIDI velocity, the sounds from each of the drawbars are spread very slightly in time, as they should be), and the percussion now suppresses the loudness of the body of the sound, although perhaps not quite as much as it should. In addition, the outboard effects section has been extended and improved. Happily, the anomalies in the original B3 V's Leslie effect have now been corrected and, while it's still not the most realistic rotary speaker simulation I've ever heard, it's not the worst. Oh yes, and a 25-note pedalboard has been added, which is good news. If you have the earlier version, upgrade it. 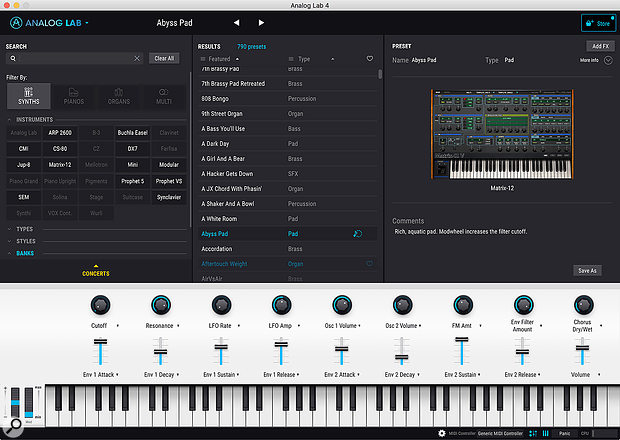 In addition to the three new synths and the updates in B3 V2, V Collection 7 includes a set of 800 new patches called 'Synthopedia', plus updates to Analog Lab 4, Arturia's semi-preset sound library that can be used in isolation or modified using the rest of the V Collection instruments as editors. It's easy to overlook Analog Lab but, as a source of thousands of usable sounds that you can find and select using Arturia's well-designed search engine, it's superb. Furthermore, its new Concert panel and Stage View allow you to set up and see what are more commonly called 'live sets', so that the sounds that you need now fall more quickly to hand. If you want to take V Collection 7 on stage, this is the way to do it.

The advantages of plug-in instruments are myriad, not least of which is the opportunity to populate your studio with multiple Synthis, Mellotrons, Fairlights and Synclaviers (and much more besides) without selling your house, your soul, or any family members. The disadvantage is that you don't get the rush of adrenalin caused by owning and programming these venerable instruments, nor the hands-on experience — for better or for worse — of trying to get them to do what you want. But from a sonic perspective, soft synths continue to creep closer and closer to the original instruments. I'm already looking forward to finding out what Arturia are planning for V Collection 8.

Will Gregory: My Favourite Synths
1 day 6 hours ago.