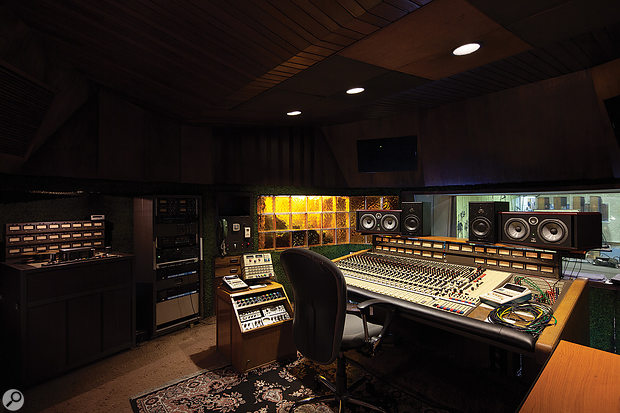 An ion is an atom or a molecule with a positive or negative charge. Ions abound in flames and lightning, and they are highly reactive, rapidly interacting with ions of opposite charge to produce new molecules — a process which may release substantial amounts of energy.

Today we can only guess whether Tiberio Kertesz, a musician of Hungarian descent, knew how well this name would suit the studio he founded in Buenos Aires in 1956. A recording venue which is sometimes called the ‘Abbey Road of Tango’, the studio was declared a ‘site of cultural interest’ by the Argentine government in 2005, honouring Ion’s vast contribution to the country’s musical culture. 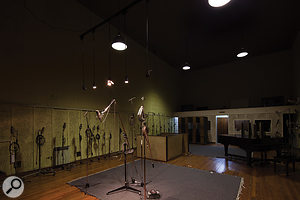 This status had yet to be earned when Kertesz, a cellist with the National Symphony Orchestra of Argentina, began to capture performances with portable recording devices. Soon enough, he discovered that he would have to put this new venture on more solid foundations if he was to pursue recording any further. Only four years later, in 1960, Ion was moved to the former dance hall in the borough of Balvanera where it still resides today. In an era when recording was highly institutionalised, Ion was one of the first independent, private studios in Argentina, and is the only one that has survived until today. 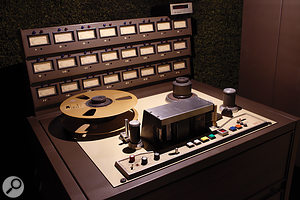 The studio’s vintage MCI 24-track tape recorder is perfectly paired with a JH500 console from the same manufacturer. 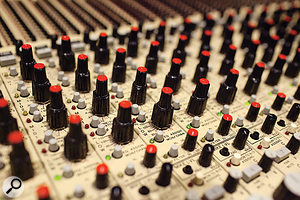 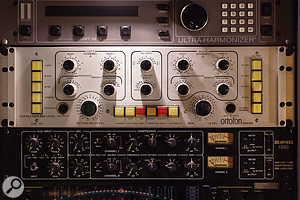 Ion’s outboard collection includes rare and unusual pieces such as this Ortofon correction amplifier, which was designed for vinyl mastering. 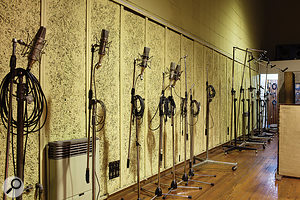 Most of the impressive collection of mics are stored on their stands, lined up against the walls of the live room.When the studio moved to its current home, the current owner, Osvaldo Acedo, was already on board. He started at Ion as a runner only a few months before, at the age of 15, when his father, who was a fellow violinist with Tiberio Kertesz, asked the founder to find his son a job. Eventually Acedo became the manager of the studio, and he kept this position when Kertesz moved to Los Angeles in the mid-’70s to found another studio, selling his venture in Buenos Aires to new owners. After spending 36 years at Ion, he was finally offered the chance to acquire the studio in 1996, under what he describes as favourable conditions.

Although Tiberio Kertesz’s background was in classical music, his studio appeared on the map just in time to provide a home for the new wave of Argentinian music that emerged in the 1960s. Musicians revered the studio for both the quality of the equipment and the expertise of the sound engineers. The Studio A control room was last remodelled in 1978, and has remained in exactly the same condition since, boasting an abundance of walnut wood on the ceiling, warm yellow glass panels on the sides and a thick, dark green carpet on the walls. By today’s standards the control room is fairly small and dimly lit, yet it feels like a cosy den, with a rather unreal aura which only adds to the atmosphere of the studio.

In the early years, the control room housed an impressive custom Ampex mixer with brushed metal surfaces that was mostly suitable for four-track recording. This eventually made way for the 28-channel MCI JH500 desk which remains at the heart of the studio. It is accompanied by a JH24 two-inch tape recorder by the same manufacturer — a configuration which used to be a standard across a large number of studios, especially in America, but is unusual today.

Some of the outboard in the control room, such as the four Urei LA4 limiters, has been on duty since the ’70s, while other equipment has been installed more recently. With a pair of EMT 261 limiters, Massenburg 8200 and Pultec EQP-1A equalisers, two Lexicon 480L reverbs and an EMT 240 gold foil plate, as well as two Avalon VT737 SP and U5 units, Ion boasts a distinctive collection, which also has room for rare pieces such as the Ortofon correction amplifier.

The big live room, measuring roughly eight by 12 metres, remains almost exactly as it was in Ion’s founding days. Its wooden floor may even be older than the studio itself — it is thought to have been installed during the building’s days as a dance hall. In addition, Ion also offers the much smaller Studio B on the second floor, which is mostly suited for overdubs to recordings crafted in the main hall.

A handful of spotlights dramatically accentuate the treasures hidden in the live area: the Boston/Steinway grand piano, the isolation booths at the rear end of the hall, and perhaps most importantly, the dozens of vintage Neumann microphones lined up on their stands against the walls, patiently awaiting the next recording session. A number of U47s flock behind the piano, while U67s form a guard of honour near the left wall, along with an SM69 here and a pair of KM84s there; these microphones certainly played a significant role in creating the sound which made Ion famous.

An Argentinian newspaper once wrote that the “condensed history of the national music“ was to be found behind Ion’s doors, and they were spot-on with this description. Some of the country’s brightest musical legends, such as Astor Piazzolla, Osvaldo Pugliese, Oscar Alem n, Lalo Schifrin and Mercedes Sosa have reacted like ions with other musicians, and the energy that was released during this process condensed in the form of numerous classic records. Since its early years the studio has been used by foreign artists, too — historical photos in the lobby show Alan Parsons and Vinicius de Moraes, amongst others — and, more recently, European crossover projects such as Gotan Project and Tangowerk have sought, and found, their own slices of Ion’s musical heritage. As the largest and most legendary sound studio in Buenos Aires, Ion remains one of the most remarkable recording venues in the world.