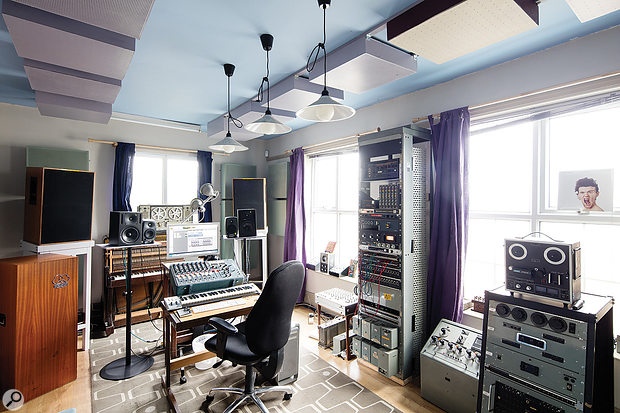 When studio owner Martin King left London to move up North, he was swimming against the tide in many ways. However, after six years in operation, the success of EVE Studios has justified his decision. EVE stands for ‘experimental vintage recording environments’, and there is probably no better way to describe the venue King has created. EVE is a music production space of a kind that is rarely found these days. 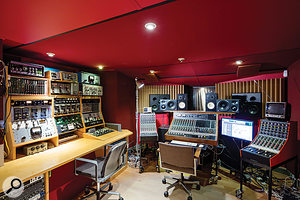 The basement control room is centred around a vintage Calrec console. 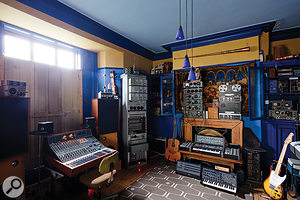 The studio began as a private project, and owner Martin King retains his own writing and production room. 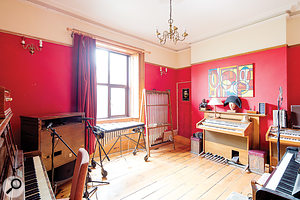 The Piano Room is home to numerous desirable keyboard and percussion instruments. 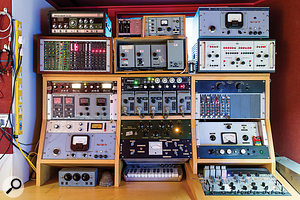 Not your average outboard rack! This panel in the control room is home to, among other things, no fewer than six Pye limiters (lower left and top right), BBC mic amp modules and ‘limiting amplifier’ (centre) and a Cinema Engineering 4031B equaliser (centre right). 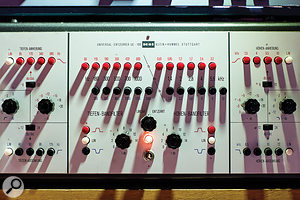 Rare valve processors in the control-room rack include a Klein+Hummel UE100 equaliser and rackmounted Pye limiters. 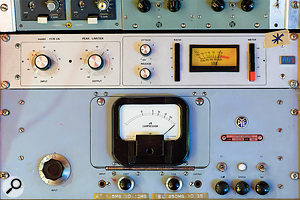 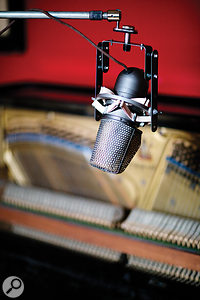 Regarded as one of the best ribbon mics ever made, RCA’s KU3A was nicknamed the ‘Skunk’ thanks to the white stripe just visible in this photo. 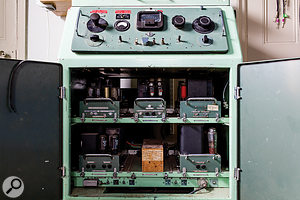 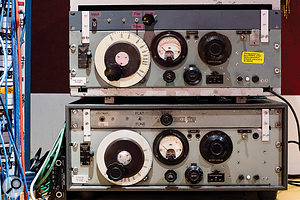 Some of the vintage gear has been heavily modified. 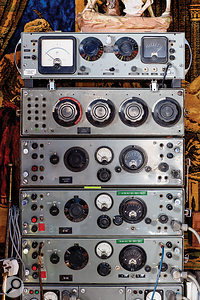 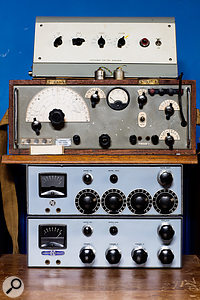 Classic British gear in Martin King’s room: from top, Vortexion preamp, BBC ‘portable tone source’ and Pye mixer.For many years, King had been operating a personal writing and production studio in London. He had always been interested in the BBC’s legendary Radiophonic Workshop, and when he was searching for a particular synthesizer, he ended up, as he puts it, “in the murky world of BBC redundant gear sales“. In the ’80s and ’90s, then-obsolete studio kit was sold off — or even thrown away — in large quantities. And before the vintage boom and the Internet, there was only a small group of enthusiasts interested in chunky valve gear from the ’40s and ’50s.

For King, especially, the old BBC kit ticked all the boxes: “It sounded amazing, it was serviceable equipment of the highest possible build quality, and it was available at a price I could sometimes afford, whereas newly manufactured gear was much more expensive.“ Over the years, he built up what is now one of the largest collections of vintage British recording equipment in the world — but much of it had to remain in storage until he eventually opened up EVE.

Tales Of The Unexpected

Around 2010, King acquired an old Edwardian mansion in Stockport, just south of Manchester. The house was built in 1850 as a vicarage, and used for this purpose for a century.

As King explains, the house had “quite a curious history. It was built over running water, and there are a few unexplainable phenomena: things aren’t always quite as clear-cut scientifically in the recording process as you’d expect!“ At first, he wanted to create another studio he could use for his own work, but decided to give access to other people to “make it work as a self-sustaining organism“. One thing led to another, and finally EVE evolved into a whole house full of creative spaces. Today, the mansion is home to the basic EVE rooms, which include several tracking spaces on ground level, as well as the control room and a few more live rooms in the basement. But there is also the so-called Radiophonic Room, which offers a great selection of BBC gear, as well as Martin King’s private studio room, which further adds to the enormous collection of vintage equipment at EVE.

There is a 70-square-metre tracking room on the ground floor; add in the 20-square-metre Radiophonic Studio and another 60-square-metre studio area in the basement, and in total, there’s around 150 square metres of recording space, comprising eight different environments. The main tracking rooms on ground level are the Piano Room and the Silver Room. The former houses a Richard Lipp & Sohn upright piano from 1910, a Wurlitzer 200A electric piano and a Hammond L100 organ with a Leslie 122 valve rotary speaker, as well as a lovingly restored Premier vibraphone from the 1920s and Hawkes tubular bells from the 1930s. Next door, the Silver Room is the largest tracking space, with acoustic panels from the BBC’s Maida Vale studios, in a variable configuration. According to King, this room boasts a “certain sound and atmosphere that you could never recreate if you drew it out on a design board from scratch“. Communication with the control room downstairs is maintained by way of a three-foot-long horn speaker mounted in one of the ceiling corners, and aptly named the ‘voice of God’.

The true heart of EVE Studios, however, lies in the basement. The control room is centred around a 26-channel Calrec console that was commissioned for classical engineer Arthur MacKenzie in the ’70s, while the outboard rig almost defies description, so full is it of rare and unusual kit. There are vintage units, prototypes, obscure oscillators that have been modified to serve as equalisers... Half a dozen Pye limiters — smaller modules as well as ultra-rare 19-inch units — are joined by passive Altec and Cinema Engineering filters, a Klein+Hummel UE100 ‘Universal-Entzerrer’ (universal equaliser), and a number of BBC valve mic preamps, dating from the late ’40s and housed in recycled ammunition cartridges. More standard kit like a silver-face Urei 1176LN and a pair of dbx 160 compressors is in the minority, while the few current production units, such as an Empirical Labs Distressor and a Cartec EQP-1A, stand out among the walls of vintage gear.

The control room window looks into the Dry Room, a space well suited for vocal recording, and the basement contains reverberant rooms as well, which can be used for drums, guitar cabinets or as natural echo chambers. As you’d expect, the microphone collection at EVE matches the range of outboard, with valve mics such as an AKG C28 and a pair of Neumann KM54s as well as rare ribbon types such as the unidirectional RCA KU3A ‘Skunk’ mic and a BBC Marconi ABXT.

In addition to the actual recording spaces, the studio also offers four large client bedrooms upstairs. According to Martin King, the majority of the studio’s clients take advantage of these facilities, and most of the artists visiting EVE are coming for recording sessions rather than mixing. Lately, the team around King and in-house engineer Henry Broadhead have worked with clients such as Metronomy, Everything Everything, Dutch Uncles, Wiz Khalifa and BC Camplight. Berlin-based electronic duo Booka Shade enjoyed working there so much that they named their 2013 album Eve after the studio! Currently the Radiophonic room is being expanded for mastering duties, and EVE are also planning to release some custom-made studio gear, too. The controls on several prototypes in the control room bear promising labels such as Obsession, Seduction and Libido...