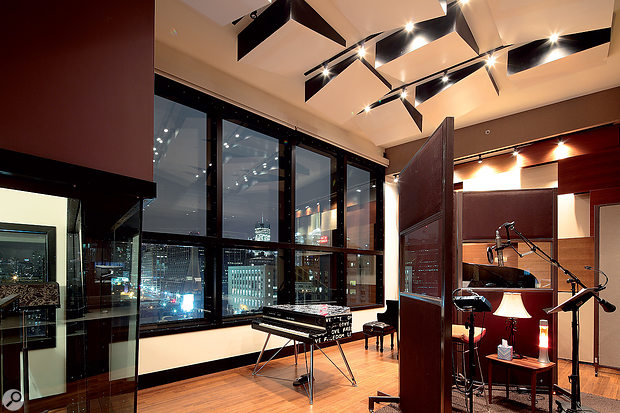 High real-estate prices and the downturn in the music industry have brought about the demise of many classic studios in recent years, especially in cities such as New York, where space is at a premium. So when Jungle City opened its doors a couple of years ago in New York, it seemed like a beacon of hope in an era of diminishing production budgets. 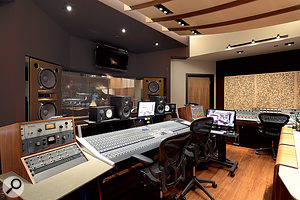 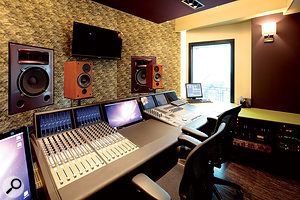 In addition to the large Penthouse, Jungle City also operates two smaller suites, the North and the South Studio, the latter pictured here. 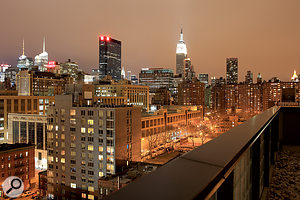 Jungle City has arguably the best night-time views of any studio in the world, and is built to make the most of them. 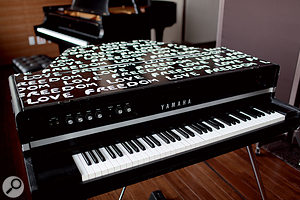 Above: Alicia Keys' hand-painted Yamaha CP70 electric grand piano. Below: a classic recording channel for R&B vocals and much more, with an AMS Neve 1073 followed by a Tube-Tech CL1B. 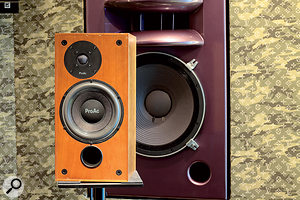 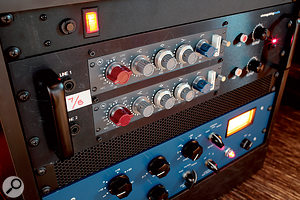 Jungle City quite literally entered the scene at the top level: the studios occupy the penthouse in the 10th and 11th floors of an office building in the High Line district of Chelsea. Building the studio, and securing the real estate, cost Ann Mincieli and her investors more than 8 million dollars. For Mincieli, who made her mark as an engineer and producer working with the likes of Jay-Z and Usher, but more importantly as an engineer and studio coordinator for Alicia Keys, the studio is a dream come true.

"My dream was to create a luxurious, technically impeccable, 21st century haven for first-tier artists, producers and engineers,” says Mincieli, who commissioned the acoustics design firm WSDG, founded by Walter Storyk (who created Jimi Hendrix' Electric Lady Studios in the late '60s) to build the studio. The clientele Ann Mincieli is working with seems to demand not only a high-class studio environment, but also a secluded space detached from the bustling city. And Jungle City offers both, sitting on top of the building like a spaceship, including a large roof deck amongst other amenities. The main control room of the main room, the so-called Penthouse Studio, features daylight from the front and from the back — a very rare feature in a studio of this size — and stunning views over Midtown Manhattan.

The Penthouse control room is centered around a 48-input SSL Duality console, while Jungle City also owns a rare EMI TG12345 MkIII desk. One of a mere two dozen built for EMI's own studios in the late '60s, it has been fully recapped and refurbished. The 220 square-metre Penthouse studio encompasses also an isolation booth and a lounge area, not to forget the spacious live room, which has a very large window front facing north towards Times Square.

On the 10th floor below, Jungle City is completed by two smaller suites, the North and South Studios, designed for editing, mixing, overdubs and production work. Each can be operated independently from each other and from the main Penthouse rooms above. The North Studio is outfitted with a 32-channel Digidesign Icon controller, and it also offers some hand-picked outboard units and a 16-channel Chandler summing mixer.

By contrast, the South Studio, while also DAW-based, is centred around a Euphonix S5 Fusion console, and it boasts not only classic outboard gear such as the Universal Audio 1176LN compressor, but also more unusual effects processors like the Evol Audio Fucifier, a pretty unique distortion machine. Both the North and South studios offer their own recording booths, as well as lounge spaces and a private terrace facing the Hudson River.

Jungle City's microphone locker is small by the standards of some studios, because for the studio's largely urban R&B clientele the main focus is not on capturing large ensembles playing all at the same time, but rather on recording vocal tracks and other instruments as overdubs. It nevertheless offers some highly regarded items such as a Neumann U47, Sony C800G and an RCA 77DX ribbon mic.

Thanks to its location and design, Jungle City feels great during the day, but becomes downright magical at night-time. The exceptional view of New York's skyline would boost anyone's creativity, and what more can be said about a studio space? It isn't only a studio's job to capture magic, but to inspire it.

When it was built, many people wondered how such a high-class studio could survive in the modern music business, but according to Ann Mincieli, there are still people willing to wield large production budgets: a studio simply had to create an interesting offer to attract the demanding clientele. With Jungle City, she has certainly succeeded, and artists like Beyoncé Knowles and Alicia Keys, amongst many others, seem to love this new playground on the international studio map.