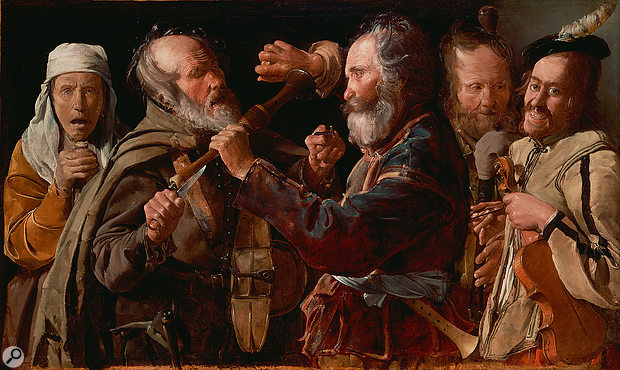 Not only would this struggle reduce the competition for gigs, but someone was also going to get a free flageolet out of it.

If only we could all work together, we could compete against each other more effectively.

In any job interview, when asked the question “What do you think is your biggest weakness?” the best response is to reach into your jacket pocket, pull out a small printed card and silently slide it across the desk towards your interviewer revealing the words: “I have a tendency to over-prepare for some situations.”

Like it or not, life is a pitch, and unless you are at the absolute pinnacle of your game or doing a line of work so niche that there’s no-one else qualified or available to do it, at some point you are going to have to jump through some hoops to get the gig. Personally, I’ve never minded the competitive nature of pitching for commissions. For the most part, the composer hungriest for the work is the one who will get the job, and there’s something honourable and cosmically fair about that. Unfortunately, we never really value that which we attain too cheaply, and now that the idea of production companies paying people to pitch has become about as fashionable as beehive hairdos and Crocs, the whole process is brutally wasteful. And there are rumblings that it’s only going to get worse.

Years ago, I predicted in this column that the age of paying the client to pitch at them was just around the corner, and last year we had a public demonstration of exactly this. A well-established music agency with a good number of brilliant composers already on their books ran a ‘competition’ to score a documentary feature. Entrants were required to submit some music along with a fee for each pitch they sent in. The idea was apparently to use the numerous ‘competition’ fees to fund the music budget for the eventual winner. The small print of the rules revealed that if they didn’t receive any pitches that they liked they didn’t have to give the music budget to anyone who had entered and could (at the discretion of the ‘judges’) give it to any composer they chose.

This was the media composers’ equivalent of the ‘pay to play’ scandal from a few years back, in which some live music venues charged bands for the privilege of performing, and sparked a pretty instantaneous and unanimous Facebook and Twitter outcry amongst the various online composer forums, the general view being that this was a bridge too far.

Thanks to a combination of online anger and diligent behind-the-scenes ‘quiet-word-in-the-ear’ diplomacy from the British Academy of Songwriters, Composers and Authors (BASCA), the whole thing was quickly dropped. While there was no suggestion that the competition organisers were being malicious or underhand about their idea or its implementation, to me it spoke volumes about recognising the terrible lengths composers at the start of their careers will go to get a foothold. It could be argued that this type of practice is merely indicative of a saturated industry with too much background noise, and too many composers chasing too few gigs.

Unfortunately, this probably won’t be the last incident of its kind that we will collectively have to deal with. However, it showed just how powerful and united a voice composers have, if we can get behind a single issue and work together to protect our rapidly shrinking lines in the sand. We are all in the same boat, and while we all feel terrified and small and unregarded by an industry we want to succeed in, the more connected we are, the more power we have. And to those who stepped up to fight for the issue, I’m proud to count myself among you — and, more importantly, happy to compete for (and sometimes lose) pitches to you as well.