One thing that never changes in the world of music: the people who make it usually end up getting ripped off. 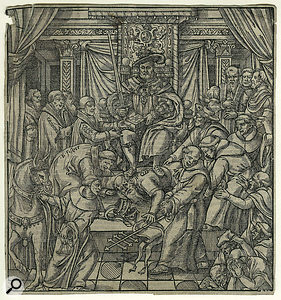 "Sire, I regret to say that we are having trouble collecting royalties from your excellent collection of hymns. I suggest we dissolve the monasteries.”

Does anyone seriously believe, as we were told at school, that Henry VIII composed 'Greensleeves' in order to woo Anne Boleyn? This was a man who, in addition to declaring wars against pretty much every country he disliked, also had a number of his close friends and family (including a couple of his spouses) executed for various infractions, told the Pope to go to hell, and forced his country to adopt Protestantism simply so he could ditch his first wife. Doesn't sound like the kind of man keen to respect a humble lute player's intellectual property, does he?

Some time later, in 1781, the perpetually penniless Wolfgang Amadeus Mozart wrote home to his father, complaining about his experiences in Vienna. "A composer working for a big client should be paid a sufficient income to enable him to serve his client alone, without being obliged to seek additional earnings simply to avoid being broke all the time.”

He also had concerns about piracy and cashflow that will be familiar to all of us, asking: "If I have some work printed or engraved, how can I protect myself from being cheated by the engraver? Because surely he can print off as many copies as he likes and therefore rip me off? I guess the only way to prevent this would be to keep a sharp eye on him. I must close now, because I have to go and find a piano I can rent. And believe me, my sole purpose here is to make as much money as possible.”

More recently, in 1938 the Academy Award for Best Film Soundtrack was given to the father of modern movie music, Erich Korngold, for his score to The Adventures Of Robin Hood. Widely regarded as one of the greatest scores ever written, it is also notable for the fact that, for the first time ever, the Oscar was given to the composer himself, rather than the head of the music department of the studio that released the film. Imagine being a winning composer in the preceding years, having to sit in your tuxedo and smile through gritted teeth as your boss bounded up on stage to receive your award.

It would appear that struggles for recognition, protection and payment for our work are nothing new. In fact, they're an integral part of our business — but are things actually better or worse than they were in Mozart's or Korngold's days? Well, I was asked to pitch for a TV job recently for a company that demanded not only the entire publisher's share of all royalties, but 50 percent of the writer's share as well. In other words, the price of admission for this gig was to be forced into accepting a silent co‑writer/publisher to take 75 percent of my music's earnings. I'm not sure if this approach is any more honourable than royalty simply nicking all our royalties just because they have a massive codpiece and a 100,000‑strong personal army.

Interestingly, when Henry VIII eventually died, he was little more than an obese mass of decaying fat. His huge coffin was taken through West London and the night before his funeral, his bloated, putrefying corpse actually burst, causing dogs to gather and lick the greasy dribblings from his now badly leaking sarcophagus.

And as forced publishing deals go, I've had ones that stank even more than that.