Online delivery means fewer ways for things to go wrong, but it also makes media composers more faceless than ever — and robs us of some vital excuses. 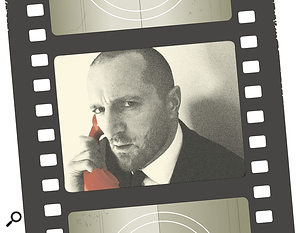 When I began my career in 1989, the studio I worked for delivered its music (mostly cheesy radio jingles) to its clients (mostly cheesy jingly local radio stations) on small spools of quarter‑inch tape. I had to drive these 30‑second masterpieces swiftly across town on my 50cc moped and hand them over to the receptionist at the radio station. I still occasionally shudder at the memory of screaming through my helmet at the rush‑hour traffic, in dread and fear that if I failed to get my precious cargo to the broadcaster by 6pm, the local listeners might go to their graves never knowing just what special end‑of‑season savings they might expect to enjoy at the Redditch Discount Sofa Store that coming weekend.

Until recently, the life of a production composer was a whirlwind of delivery company accounts, things going astray in post rooms, Jiffy bags and lies. "I definitely sent it on Friday afternoon before the post office closed, but if it's lost I'll resend it later today...” It's not that long ago that a UK broadcaster sent a motorbike courier on a two‑and‑a‑half‑hour journey up the M40 to collect a new edit of a four‑second sting from me. The whole time, all I could think of the pointless endeavour was "What if the poor bastard crashes?” 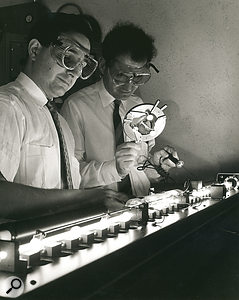 "It appears to be some sort of primitive information‑carrying device from the late 20th Century... what do you suppose the words 'Redditch Discount Sofa Store' signify?”DAT tapes (remember them?) were still seen as an absurdly expensive and indulgent luxury, and although ISDN technology existed, in theory allowing high‑quality live audio feeds through the telephone, we were much too far out in the sticks for that kind of exciting telecommunications power. We didn't even get a C&A in our town until six months before they went bust.

The rise of cheap recordable CDs in the mid‑'90s meant, at last, that all your work could be presented to clients on a cool‑looking disc that felt just like the real music they might buy in the shops. I even had some sexy metal CD tins made up with my name embossed on the front, so that the physical product of what I created had some weight, and felt like something tangible and crafted. At the very least, it would give them something shiny to look at, in the hope that it might distract them from any musical shortcomings. Of course these CDs would invariably get lost in the bottom drawer of a producer's desk, or be used as drinks coasters in the edit suite, but it all added up to the idea that you had actually created 'something'.

Those days are now far behind us. All my work is uploaded to web and FTP sites so all members of the production team can access all the tracks instantly. I upload MP3s initially and then, as the work is signed off, I upload the WAVs, rejoicing in the knowledge that some things remain comfortingly unhindered by technology's advance — the 'broad'band round here is still utter rubbish. Nowadays, the majority of my time seems to be taken up in trying to explain to the producers the difference between the two format types. "I think there's a problem, Paul. Those WAV files are corrupt or something, they are taking ages to download but they still sound the same as the PM3s you sent...”

Obviously, this new online age is greener, quicker, more efficient and better in every conceivable way, but with this having always been a largely anonymous and invisible trade, our shop fronts are now reduced to dull file‑sharing web sites and 'download' prompts rather than shiny CD tins and fancy compliment slips. If delivery formats get any more immediate, eventually there will be nothing at all to distract people, and our music will have to speak for itself. Perish the thought.