Want to be a media composer? Get used to being the most anonymous cog in the TV production wheel. 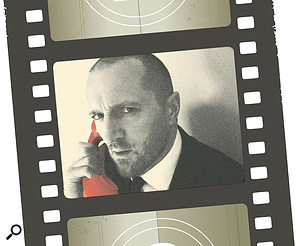 So I'm at a swanky showbiz wrap party in a posh club in the heart of Soho, sitting on my own in the corner nursing a gin and tonic. There's no‑one here that I know. An imposing man approaches me.

"This is a private party,” he says.

"I'm going to have to ask you to leave.”

"But I was invited.”

"I composed all the music.”

These high self‑esteem moments certainly underline the main reason why anyone with even a passing interest in the performing arts, fame, glory, or even just basic professional dignity, usually has such a miserable time as a media composer. It's hard to imagine a more invisible part of the programme‑making machine than 'the bloke who does the theme tune', and it helps to explain why some of the best in the business tend to be anti‑social, hermitic veal calves, whose pasty demeanour and awkward interpersonal skills curiously counterpoint their ability to come up with engaging and memorable music enjoyed by millions and remembered for generations. 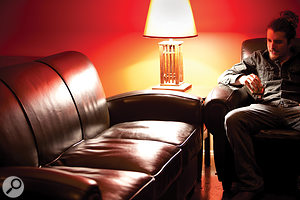 "So then I bounced all the files at 24‑bit, 96kHz and loaded them into Pro Tools and... hello?”These days, of course, it's even worse: now that we can email our work direct to the clients, there is rarely any real need for us to actually ever see them. Whenever I'm asked to go for a meeting with a client, I always say that in the time it takes for me to get on a train and fight my way across London to see them, I could have sketched half a dozen ideas and sent them over. So I leave it up to them to decide how they'd best like me to use my time. The upshot is that while I am always really efficient and productive, I'm largely anonymous and tend to get thrown out of parties. Even ones that I'm invited to.

Professional relationships mean a great deal, and as anyone will tell you, this job is about trust. 'Let's hire the composer least likely to balls it up and make us all look bad.' Or to put it another way: someone with a healthy showreel is a far safer bet that someone who gives good phone. TV composers tend to have such a low opinion of themselves that many of the best in the business refuse to acknowledge they are even in the business at all, preferring to describe themselves vaguely as 'producers' and spending far too much of their time trying to get some doomed vanity album project off the ground. I know more than a couple of guys who would happily rush a TV composing job likely to be heard around the world in order to get to a pub gig in the evening with their band playing to a room full of 60 drunkards who, in fairness, would applaud at anything. Does anyone else find this as strange as I do?

Personally, I'm proud to be the least cool kid in the class. I once wore my wellies to the school disco. The geek shall inherit the earth, and if not that, at least get some telly commissions out of it.