There's learning, and there's education. And when it comes to music technology, the two aren't always connected.

'We don't need no education,' or so the song says. I'm inclined to agree.

A kid emailed me recently asking for advice on how to make it as a film and TV composer. He was 19 years old, in the last year of an A-level in Music Technology, and yet he'd never heard of Sound On Sound. Didn't know what it was. Never seen the web site. He didn't know what a BAFTA was and had never heard of Ennio Morricone. But he said he had Reason on his PC. So I suppose that's all right, then. 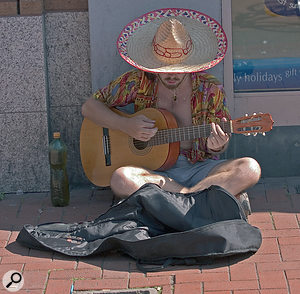 "Students at Giggleswick University (formerly the North Yorkshire College of Apiary) are given every opportunity to present their work in the public arena.”

Imagine the scenario. You're 17 and your mum gives you an ultimatum: either get up at 6am every morning and go and be an apprentice plumber with your uncle John, or get some qualifications. What's that you say? Local college offers music tech courses? I can hang out for three years, join a band, then hand in some course work involving bongos and an effects pedal? These crossroads in life are always so tough on the young people, aren't they?

I truly believe there are loads of excellent music tech learning institutions crammed with dedicated people who set their hearts on working in music and will stop at nothing to achieve their dreams. Good luck to them. I also know how education can be the silver bullet with regards to unlocking potential in people. However, I also know that a picture of a mixing desk looks fabulous on even the dullest university prospectus and, as far as the deans are concerned, pupils equals pounds — so why would they care if you can't get a decent plumber these days for love nor money?

The UCAS web site (the organisation that deals with placing people in further and higher education) lists, across the UK, 286 courses relating to 'music technology'. To put that into perspective, it lists just 134 in pharmacology, 114 in zoology, eight in cancer care and, curiously, none in plumbing.

My point is that the impetus for any kind of success comes from you. If you plot your own focused, unwavering and realistic course through the business, work incredibly hard and never give up, chances are you're already destined for good things — educated or not.

As an experiment, I recently contacted most of the educational establishments that advertise in the back of the UK edition of this magazine and offered to visit their media students and give a talk or have a question and answer session. I sent them a brief CV and links to my showreel. Told them of my 20 years of service in the music business, the shows I'd scored and the awards I'd won, and mentioned the number of emails that I get from eager (and often desperate), budding composers wanting to break into TV. I'd travel anywhere in the UK and would give my time free, for the purposes of trying to paint as accurate a picture as possible of how music and the media business works, to as many of the students as were interested. Want to know how many of them took me up on the offer? Not a single one.

I'd probably just depress everyone anyway.